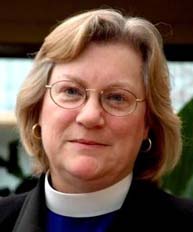 [Episcopal News Service] The Rev. Gay Clark Jennings, who just completed a six-year term on the Episcopal Church’s Executive Council, announced June 5 that she will stand for election as president of the House of Deputies.

Jennings said in a posting on Facebook that she came to her decision “after much prayer and many conversations with Episcopalians around the church.”

“I ask for your support, ideas, participation and prayers,” she said, asking people to join her on the page “so we can exchange ideas and questions about the work God is calling us to do.”

Jennings also announced her intentions via a letter to members of the House of Bishops and Deputies e-mail listserv.

“I’d like to work with you and other leaders to change the way we do business in the next triennium,” she said in the letter. “For the Episcopal Church to matter in the 21st century, we have to find ways to move forward together. I believe that God is calling us to embrace a future with no more false choices between mission and governance. No more false wars between individuals or groups. No more jockeying for turf or control.”

Jennings said that, beyond asking for the support of deputies, she “hope[d] that all of you will invest and participate in building collaborative and networked partnerships for the work that God has called us to do at this General Convention and in the next triennium.”

Anderson announced May 23 that she would not ask convention to elect her to a third and final term as president.

The House of Deputies will accept nominations for the presidency during the upcoming meeting of convention on July 8 and the election for the 32nd president of the house will be held the next day.

On July 10, the house will receive nominations for vice president, according to information here. That office has been vacant since Feb. 15, 2010, when Diocese of Minnesota Bishop Brian Prior, who had been vice president, was ordained bishop.

The vice president of the House of Deputies must be a different order than the president.

The House of Deputies includes up to eight voting members from each of the church’s 109 dioceses, one area mission and one convocation. The General Convention is one of the largest legislative bodies in the world.

The President of the House of Deputies serves as vice president of the Executive Council and the Domestic and Foreign Missionary Society (the Episcopal Church’s corporate entity). The president presides over the House of Deputies at General Convention, appoints clergy and lay members of all the standing commissions and convention legislative committees, and performs many functions of liaison, development, and opportunity between conventions.

The position is unpaid, but in the 2010-2012 triennium General Convention provided (line 140-145 here) a budget of nearly $589,000 to cover Anderson’s expenses, to compensate staff to assist her and to cover the costs of maintaining an advisory council which the president appoints.

Since Anderson announced her decision to retire some observers have commented on how the demands of the job could financially impact potential candidates.

Jennings, 61, lives in Sagamore Hills, Ohio, and has been the associate director of CREDO Institute Inc. for the past nine years. CREDO provides an array of conferences and post-conference resources that help eligible Church Pension Fund participants examine, evaluate, and re-energize their health and wellness.

“I am working to ensure that I will have all of the time necessary to devote to the position of president of the House of Deputies,” Jennings told Episcopal News Service shortly after she announced her intention to stand for election.

Prior to joining CREDO, Jennings served as canon to the ordinary in the Diocese of Ohio for 17 years. She was ordained deacon in 1978 and priest in 1979, and served parishes in Virginia and Ohio early in her ministry. Jennings stood for election as bishop of the Diocese of Virginia in early 2007 when current Bishop Shannon Johnston was chosen.

She is married to the Rev. Albert Jennings, rector of St. Timothy’s Episcopal Church in Macedonia, Ohio, and dean of the diocese’s Summit Mission Area.

Jennings chaired Executive Council’s Governance and Administration for Mission committee during the final three years of her term on council. As part of its work, the committee took the lead in revising the council’s bylaws and the personnel policy handbook for employees of the DFMS.

She is also the clergy member of the Episcopal Church’s delegation to the Anglican Consultative Council, which next meets this fall in Auckland, New Zealand.