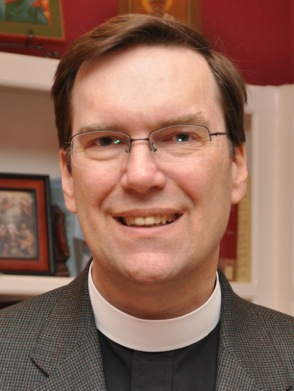 [Episcopal News Service] The Very Rev. Nicholas Knisely was elected on June 2 to be the 13th bishop of the Episcopal Diocese of Rhode Island.

Knisely, 51, dean, Trinity Episcopal Cathedral in Phoenix, Ariz., was elected on the first ballot out of a field of five nominees.

He received 64 votes of 111 cast in the lay order and 47 of 88 cast in the clergy order. The results are here.  The bishop-elect spoke via cellphone to the electing convention at St. Paul’s Church in Pawtucket.

Knisely will succeed Bishop Geralyn Wolf, 64, who has been the diocesan bishop since February 1996. Wolf preached during the Eucharist that began the electing convention.

Assuming that consent is received, Presiding Bishop Katharine Jefferts Schori is scheduled to ordain Knisely on Nov. 17 at St. George’s School in Middletown.

Knisely has been dean of the Phoenix cathedral since 2006. Prior to that call, he was rector of St. Trinity Episcopal Church in Bethlehem, Pennsylvania, and St. Barnabas Episcopal Church in Brackinridge, Pennsylvania. He was curate at another St. Barnabas Church, this one in Wilmington, Delaware. He holds degrees in physics and astronomy from Franklin and Marshall College and the University of Delaware, as well as a Master of Divinity degree from Yale/Berkeley Divinity School.

He was ordained to the diaconate in 1991 and to the priesthood in 1992. Knisely was the first chair of the Episcopal Church’s Standing Commission on Communications and has served on various national and international bodies in that field. Knisely maintains a personal blog called “Entangled States.“He and his wife Karen are the parents of one daughter.

A nominee profiles booklet features the nominees’ autobiographies and their answers to four essay questions posed by the Search and Nomination Committee.

The Diocese of Rhode Island has 53 congregations, of which 43 are parishes, with 20,469 members and an average Sunday attendance of 5,601.