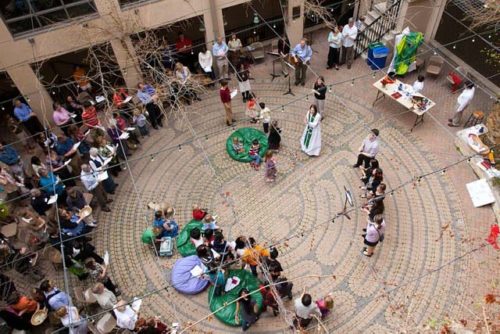 A labyrinth worship service is held at St. David’s Church in Austin, Texas. The church is nearing the end of the two-year GreenFaith certification process. Photo/Rick Patrick

[Episcopal News Service] St. David’s Episcopal Church in Austin, Texas, has a long history of environmental stewardship, so in 2010 when one of its priests suggested the church pursue GreenFaith Certification, the congregation got on board.

Two years later, as St. David’s approaches the end of the certification period, it’s been remarkable to see how the journey toward certification has taken on a “holistic” approach, spearheaded by the “green team,” but also spreading throughout the church’s other programs, said Rosera Tateosian, the team leader.

“People who haven’t been so involved have the idea to do clothing swaps, potluck dinners showing environmental films,” she said, adding that at the outset some members were concerned that the certification’s advocacy requirement would force the congregation to make political statements, but in the end they saw the bigger picture.

In 2010, the Episcopal Church and GreenFaith became partners, encouraging Episcopal churches to go “green.” On June 7 from 8 p.m. to 9 p.m. EDT GreenFaith and Michael Schut, economic and environmental affairs officer for the Episcopal Church, will host an hour-long webinar to introduce a resource guide, “Getting Started on the Genesis Covenant: Reduce Energy Use, Save Money, and Care for God’s Creation,” and to highlight the GreenFaith Certification Program.

The Genesis Covenant is a national ecumenical initiative that challenges faith institutions to reduce their facilities’ greenhouse gas emissions by 50 percent within ten years. The Episcopal Church General Convention in 2009 adopted the Genesis Covenant. The 31-page resource guide includes practical information on getting started and reaching the covenant’s goal.

“The Genesis Covenant is a significant challenge and congregations need something to help them get started,” said Schut, adding that congregations need guidance on how to assemble a “green team,” how to do an energy audit and measure carbon footprint, financing options, etc. “We wanted to help people with the nuts and bolts on how to get started.”

GreenFaith’s mission is to inspire, educate and mobilize people of diverse religious backgrounds for environmental leadership. And its work, according to its website, is based on “beliefs shared by the world’s great religions — we believe that protecting the earth is a religious value, and that environmental stewardship is a moral responsibility.”

Already some 16 Episcopal parishes and camps area among the nearly 50 Christian and Jewish congregations participating in the GreenFaith Certification Program, said Stacey Kennealy, the program’s director.

“This is a leadership level program that asks a lot of congregations; it attracts the early adopters, those that really want to make a statement around caring for creation,” she said, adding that more congregations will come on board as GreenFaith continues to build denominational partnerships.

Many congregations have on their own taken steps to green their buildings and facilities, but GreenFaith Certification offers training, resources, best practices, intensive mentoring and guidance on moving forward, said Kennealy.

St. Mark’s Episcopal Cathedral in Seattle, Washington, is one such “early adopter” and had already established a task force to green the cathedral before entering the GreenFaith Certification Program, said Ruth Mulligan, co-facilitator of the cathedral’s green team.

“The certification program helped us to move to a higher level of integration … and it gave us a structure,” she said. “Instead of spending a year trying to figure it out, we just knew what we were supposed to do.”

On May 15, the cathedral completed the first year of the certification program, Mulligan said. The long-term plan is to use the certification as a way to reach the ultimate goal of the Genesis Covenant, which will require a capital improvement plan.

“With our big building … we have a long way to go to reduce greenhouse gas emissions. In 2010 we changed all of our lighting, but it’s going to be a major, major project to reach the goal of the Genesis Covenant,” said Mulligan. “However, since Stephen Charleston was first inspired to share his idea of the Genesis Covenant at a service at St. Mark’s, a lot of us have had a real sense of calling. We were really inspired by hearing him and want to see what we can do to achieve it.”

In June 2007, Bishop Steven Charleston attended an interfaith conference in Seattle that sought to build cooperation and understanding among Christians, Jews and Muslims to “reach a common expression of support for protecting God’s Creation on the environment. And it was during a sermon at St. Mark’s that Charleston “articulated his vision of a ‘Genesis Covenant,'” according to background information on the Genesis Covenant.

The pursuit of certification has helped St. Mark’s see the interconnectedness between worship, religious education and environmental justice, Mulligan said. The cathedral has hosted community discussion; gotten the eco-justice ministry and children and youth involved; and together the green team and the worship committee conducted a class that talked about Lent, Holy Week and Easter through the care-for-creation lens.

“It has been holistic … the idea that we are making an intentional effort to incorporate care for creation in our worship services, into Prayers of the People. In Lent this [year] we had a living tree placed in the nave, that people had an opportunity to put tags, write an intention — what they wanted to do during Lent — and many of them were opportunities for sustainable living,” she said.

“That was a whole new thing and then Prayers of the People included prayers for those who had made intentions — that was designed and planned by worship committee.”

St. Mark’s has some 450 members and, Mulligan said, she hasn’t heard of any pushback regarding greening the cathedral, but she admits, the Pacific Northwest has long been at the forefront of the environmental movement.

Kennealy said she expects that much like LEED Certification, the Leadership in Energy and Environmental Design rating system used for green building certification, GreenFaith Certification eventually will become “mainstream” in the ecumenical religious environment.

“A lot of the congregations are already sold on the idea and have done work,” she said, adding that members of both progressive and conservative congregations are beginning to understand that environmental stewardship and care for creation are something they are called to do and that in the process they can save money.

But, said Kennealy, “It’s a big commitment. A congregation has to be ready. There needs to be energy and enthusiasm, they have to be able to form a good green team and have clergy support.”

Recently, 60 members of St. David’s in Austin joined other religious organizations in support of the Safe Chemicals Act of 2011, which is currently being considered by the Senate Environment and Public Works Committee. The interfaith petition in support of it calls for the committee to vote this bill onto the Senate floor, according to a May 23 press release from St. David’s.

(One requirement of certification is that congregations issue eight press releases over the two-year period.)

“This particular petition was one that GreenFaith was supporting, so they made that opportunity available,” said Tateosian, explaining the environmental advocacy requirement of certification. GreenFaith does the “leg work” and congregations can choose whether or not to support the initiatives.

Through a partnership between GreenFaith and the Episcopal Church, Episcopal churches are eligible for a 50 percent tuition subsidy. The next application deadline is Dec. 1.

Episcopal churches and camps already participating in the partnership include: