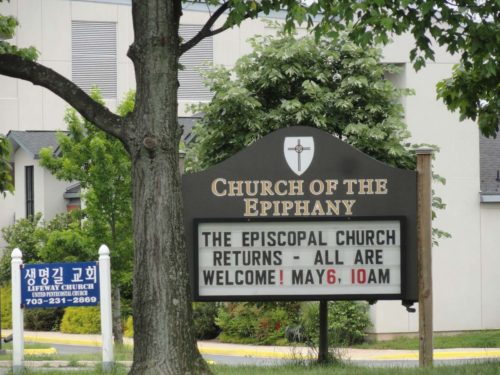 Church of the Epiphany Episcopal welcomes the community to worship. Photo/Frances Caldwell

[Episcopal News Service] The past weeks have been a time of transition for the Diocese of Virginia. Congregations that have worshiped away from their home churches for more than five years have made joyful homecomings to their church buildings. The entire diocese has joined in celebrating these returns, all while entering into a discernment process to help these congregations make plans for the future.

The recent returns and celebrations have been a longtime coming for the four “continuing congregations” that have worshipped in temporary spaces while the diocese and breakaway congregations that had joined the Convocation of Anglican Churches in North America fought over rights to diocese-owned properties in the courts. The breakaway congregations occupied the church buildings throughout the court proceedings.

In all, seven church properties (and a number of additional buildings and land parcels) have been returned to the Diocese of Virginia following the near conclusion of a five-year legal dispute. Each has a different story to tell, and telling these stories is a key part of a diocesan initiative known as “Dayspring,” an effort to discern the work of the Holy Spirit with graciousness and patience as the diocese explores how best to use resources and properties for the ministry of the church.

As the continuing congregations have begun discerning their way forward, each has realized that there is no one-size-fits-all approach to a new beginning.

Members of Church of the Epiphany in Fairfax returned home on May 6, after worshiping in a local school. While making that transition, they’re also welcoming a new interim vicar and are turning to social media and marketing to increase their visibility in the community.

It’s been a time of challenge, but since returning home the congregation has tripled Sunday attendance and doubled its membership from 25 to 50 members.

The congregation also has benefitted from what the Rev. Jennifer McKenzie, interim vicar, calls the “Blessing-a-Day Club.” A slew of blessings that “seem to fall out of the sky,” she said, have landed on Epiphany’s doorstep, including volunteer musical groups for Sunday worship, pro-bono graphic design services, and more.

“The biggest challenge right now for us is building the staff infrastructure that we need to support this growth, so that as this growth continues, we don’t let people slip through the cracks and lose people,” said McKenzie.

The congregation’s hopes for the future are high. It’s launching a new branding- and direct-mail effort to raise the church’s image and presence in the community; hosting community groups, from the Boy Scouts to an Irish dance group; and participating in a local festival. And it’s rolling out the welcome mat. “Our big thing here is, ‘All are welcome,’ said McKenzie. “And we really mean that. When people walk in the door, we want them to know that there is a place for them.”

The continuing congregation of St. Margaret’s in Woodbridge, meanwhile, hasn’t made an official “move.” Although the original St. Margaret’s church property was returned to the diocese earlier this spring, the congregation continues to worship in its “temporary” worship space, which it shares with three other denominations. Members of the congregation are joining together to discuss what shape their physical church will take in the years to come. Meanwhile, they’re saying goodbye to the Rev. Kate Chipps, priest-in-charge, who has led them through this difficult process. Chipps will retire in July.

St. Margaret’s vestry is leading the congregation through this time of transition, gathering input from members on the best possible worship space to meet their needs, and meeting with the Dayspring teams to discern a way to move the congregation out of “reaction mode” into “planning mode,” explained Eleana Boyer, senior warden.

“The spirit of the church is moving more toward a positive direction,” added Boyer. That doesn’t mean that they aren’t facing challenges, including how to grow their congregation and how to financially support their ministries. But they’re meeting those challenges head-on. “Once we get through this transition and change, you’ll see us really shine,” said Boyer. “We are a faithful people. We have come this far by faith, and we are moving forward in faith.”

Members of St. Stephen’s in Heathsville returned to their church building on Palm Sunday and the congregation is as active as ever. Members are busy planning their community strawberry festival and the annual spring barbecue and bluegrass event. Read more about their story here.

And then there’s the Falls Church, a congregation that continued to grow while worshipping in a temporary space, and where a large number of members have just “returned” to a church building where they’ve never worshipped before.

On the congregation’s first evening back in its worship space, members opened the doors to the building, inviting families to come and explore the church grounds. “We wanted them to have the opportunity to explore the blessings that God has bestowed on us,” said Tibbetts.

The congregation is looking at growing its clergy staff, including calling a “planter-builder” to oversee the church’s growth process.

A community focus is a large part of the Falls Church Episcopal DNA, according to Mike Lockaby, the senior warden.

In addition, they’re looking inward by establishing small group ministries, in which 10-to-16 parishioners will gather for fellowship and/or Christian formation. The congregation also has instituted a “partnership ministry,” which gives newcomers a contact person who is familiar with the church’s culture and spirit and who can determine the best way to welcome that person. “The message that we have been stressing and that we wish to continue to stress is, ‘We welcome you,’ and there’s no asterisk to that,” said Lockaby.

The Falls Church Anglican is the only one out of the seven properties returned to the Diocese that continues to pursue its appeal. The diocese has made settlement negotiations with the other six congregations involved in the litigation. In these cases, the Convocation of Anglicans in North America congregations agreed to return church property and Episcopal funds, and to withdraw their appeals.

In addition to the church buildings belonging to the four continuing congregations, three additional church properties have been returned to the diocese as a result of the litigation. These churches previously did not have continuing Episcopal congregations associated with them. The diocese already has reinstated Episcopal worship services at St. Paul’s in Haymarket; and the property of Church of the Apostles, Fairfax, also has been returned to diocesan ownership. The diocese has arranged a yearlong lease with the Anglican congregation of Truro Church, Fairfax, and both parties have agreed to enter into a “covenant of mutual charity and respect,” a piece of the agreement which the Rt. Rev. Shannon S. Johnston, bishop of Virginia, describes as “an opening for a transformative witness to many across the worldwide Anglican Communion.”

Coordinating these efforts amidst unique circumstances is no small task. And that’s where Dayspring comes in. The Dayspring initiative – so named for the poetic, biblical term that translates to “new dawn,” brings together leaders from across the Diocese of Virginia to plan, vision and strategize about the properties returning to the diocese, and how best to put them to use for the mission of the Episcopal Church in Virginia. Johnston is at the head of the effort, which also is guided by the Rev. Canon Susan Goff, bishop suffragan-elect, and Henry D.W. Burt, secretary of the diocese.

“It is heartening to consider how the Diocese of Virginia is responding to the staggering richness of the possibilities before us,” said Burt in a recent letter to the diocese. “Each of the continuing congregations remains profoundly committed to its mission and ministry. They are experiencing significant growth, and Dayspring teams are considering a number of transformational mission efforts at churches where no continuing congregation exists. There is tremendous energy and a gracious spirit ever present in this work.”

— Emily Cherry is the communications officer for the Diocese of Virginia.