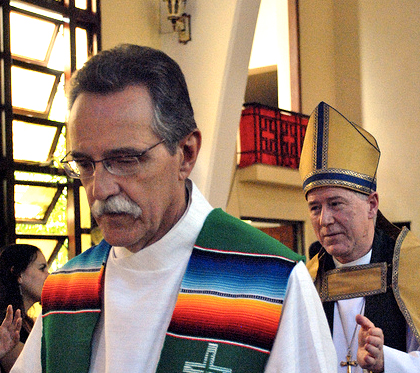 Archdeacon Michael Pollesel with Archbishop Fred Hiltz during a 2011 trip to the Episcopal Diocese of Cuba. Anglican Journal photo

[Anglican Journal] The House of Bishops of the Anglican Province of the Southern Cone has voted not to ratify the election of Archdeacon Michael Pollesel as bishop coadjutor of the Diocese of Uruguay.

Pollesel, who was formerly the general secretary of the Anglican Church of Canada, was elected to the position by the Uruguay synod last December.

No details have emerged as to why Pollesel’s election was rejected, and in an interview he said he is still waiting for official notification and has no details himself. Pollesel learned of the reversal from the retiring bishop of Uruguay, Miguel Tamayo Zaldivar.

“I was disappointed,” Pollesel told the Anglican Journal. “It’s been a long wait.” Tamayo told him that the Uruguay diocesan council will be convened next week to decide whether or not the diocese will appeal the decision.

Archbishop Fred Hiltz, primate of the Anglican Church of Canada, shared the news about the failed ratification to members of the Council of General Synod meeting in Mississauga May 24 to 27. He also sent an e-mail to the Canadian House of Bishops.

The non-ratification “leaves Michael in an awkward space right now,” Hiltz told CoGS, adding that it was “puzzling” that no reason has been given for the non-ratification. He urged CoGS members to keep Pollesel and the Diocese of Uruguay in their prayers.

The Province of the Southern Cone includes dioceses in Argentina, Bolivia, Chile, Paraguay, Peru and Uruguay.

The Diocese of Uruguay is made up of seven parishes and five missions. Its congregation is predominantly Spanish-speaking but it also has an English-speaking ministry. Many members of the congregation are the descendants of Europeans who settled in Uruguay during the 19th century.

— Marites N. Sison is staff writer for the Anglican Journal.