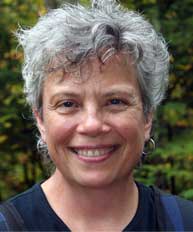 [Episcopal News Service] While the church honors its dead on All Saints Day in November, the national holiday of Memorial Day also has deep resonance for many of us. The observance began as a way to pay tribute to those who had died in wars, but over the years it has expanded to become a time when we remember all those who have died. On this day we visit cemeteries to lay flowers on the graves of those we have loved, walking amid the neatly tended rows to search out the markers with familiar names.

Cemeteries seem to be places that one either loves or hates. I know many people who find them morbid and others for whom there’s no more pleasant place for an evening stroll. But I think cemeteries aren’t just lovely places to walk: they’re also classrooms for the soul.

The most obvious lesson, of course, is that none of us are going to get out of this world alive. As we walk among the monuments we realize that worms and humus will be our eventual fate as well. There’s good reason why Buddhist teachers recommend meditating in a graveyard, for there’s no better place to ponder the transitory nature of existence.

Graveyards also provide lessons in what is most important in life. At the end of people’s lives, identities get stripped down to their most fundamental roles: father, mother, daughter, son. The writing on the stones has a Zen-like simplicity. I’ve never seen a headstone that said that the deceased was assistant vice president for human resources or the youngest person to get tenure in her department.

While honoring my own loved ones is important to me, in my travels I’ve found that cemeteries are often profoundly moving places. I remember the white markers that fill the American Cemetery in Normandy, which is located on a hillside above the beach where thousands of men lost their lives on D-Day. I recall paying my respects at Thomas Merton’s grave at the Abbey of Gethsemani in Kentucky and standing in silence before the eternal flame that burns at the burial site of Martin Luther King, Jr., in Atlanta. 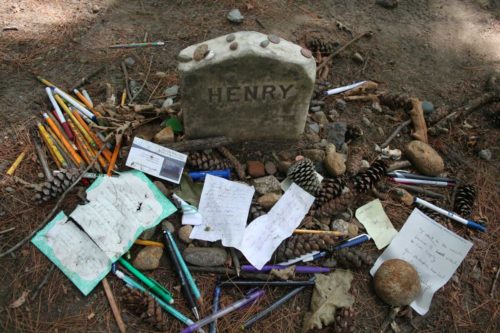 Henry David Thoreau's grave in Concord, Massachusetts, is filled with pens, pencils and other tokens left by visitors. PHOTO/Lori Erickson

One of my favorite graveyards is Sleepy Hollow Cemetery in Concord, Massachusetts, where a number of America’s preeminent authors are buried, including Ralph Waldo Emerson, Nathaniel Hawthorne, and Louisa May Alcott. Henry David Thoreau’s grave marker is the simplest of them all, a small stone bearing the name “Henry.” When I visited, the unassuming monument was surrounded by pencils, pens, and scraps of paper on which people had written their favorite passages from his work. One hundred and fifty years after Thoreau’s death, his words still draw people to this peaceful spot beneath tall trees.

Experiences like these make me wonder about the increasingly common practice of having one’s ashes scattered to the wind after death. In a culture in which so many are rootless during life, it makes sense that they would have no permanent marker in death. But my time in cemeteries has convinced me that we need a specific place to honor our dead, for there is much to be learned at someone’s final resting place.

Those lessons don’t have to be grim and depressing, as those who celebrate the Day of the Dead in Mexico know. On November 1 and 2, families gather at the graves of loved ones, bringing the deceased’s favorite foods and drinks as well as candles, decorations, and candy. The belief is that the souls of the dead come back for a few hours during this time to join with the living in celebrating.

Such celebrations recognize that the intertwining of life and death is our human condition. When we leave the gates of a cemetery, death walks with us as we re-enter our ordinary lives, whispering in our ears the eternal truth that life cannot be fully lived unless we know that it will someday end. That’s the paradox that a cemetery can teach us as we lay our flowers on graves this Memorial Day.