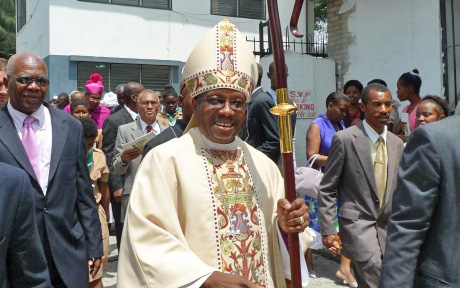 New Diocese of Haiti Bishop Suffragan Ogé Beauvoir is due to be installed in Cap-Haitien in Greater North Region of Haiti on Pentecost Sunday. Trinity Wall Street photo/James Melchiorre

[Episcopal News Service] The Rev. Canon Ogé Beauvoir, dean of the Episcopal Theological Seminary in Port-au-Prince, became the Diocese of Haiti‘s first bishop suffragan May 22 during a service in the diocese’s open-air cathedral.

Beauvoir was elected Nov. 25 on the second ballot with 68 lay votes and 25 priest votes. The election took place at Ascension Church in Carrefour, a suburb of Port-au-Prince.

Close to 1,000 people attended the four-hour long ordination and consecration service that was led by Presiding Bishop Katharine Jefferts Schori. The Rev. James Cooper, rector of Trinity Wall Street, New York, where Beauvoir once worked, was the preacher.

Preaching near the ruins of the diocesan cathedral destroyed in the 2010 earthquake, Cooper urged the congregation to see the day as one of “high hopes that things that have been cast down will be raised up,” according to a Trinity Wall Street report here.

“When I’m with you, driving around, you’re taking calls from one of your two cell phones,” Cooper told Beauvoir during his sermon. “The call today is not on your cell phone. It’s from the Episcopal Church and from the one God and Father of us all.”

Among those attending the serviced were a number of Episcopal Church bishops, as well as a representative of the Roman Catholic Church in Haiti and, reportedly, a high-ranking Vodou priestess.

Beauvoir, 55, will assist Bishop Diocesan Jean Zaché Duracin as he serves the people and clergy of the diocese, numerically the largest diocese in the Episcopal Church. The new bishop suffragan will be headquartered in the Greater North Region of Haiti. He will be installed in Cap-Haitien on Pentecost, May 27.

Duracin requested the bishop suffragan position, and received the canonically required consent (Canon III.11.10(b) (2)) of the majority of bishops with jurisdiction and diocesan standing committees.

Nominees had to “canonically have lived and/or had known links with the Diocese of Haiti over the past 10 years,” be at least 35 years old on the date of the election, have been ordained at least 10 years and been in charge of “an organized mission or institution of the church,” according to the rules established for the election.

The diocese continues to recover from the devastating magnitude-7 earthquake that struck just outside of Port-au-Prince, the country’s capital, on Jan. 12, 2010.

Beauvoir, who was born in Gros-Morne, Haiti, earned his university and seminary degrees in Montreal and was ordained a priest in the Anglican Church of Canada. He was received into the Episcopal Church in March 2000 by then-Diocese of New York Bishop Richard Grein. Beauvoir was a program associate in the Trinity Grants program from 1999 until 2004. He has been an Episcopal Church-appointed missionary to Haiti since 2004. He also served in that capacity from 1991 to 1996.