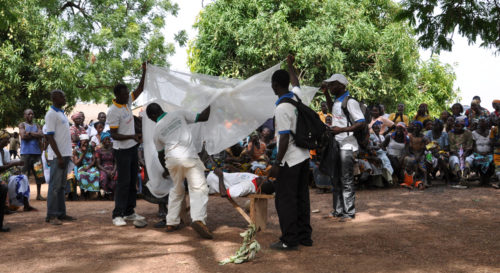 NetsforLife® volunteers use theater as one way to teach about the importance of using an insecticide-treated net to avoid contracting malaria. Here one such play is part of a community gathering, known as a durbar, in Apodabogo in the northern Ghana Anglican Diocese of Tamale. ENS Photo/Mary Frances Schjonberg

[Episcopal News Service] Episcopal Relief & Development‘s NetsforLife® program partnership and the United Methodist Committee on Relief (UMCOR) announced May 23 that they have formed a partnership to prevent and control malaria in sub-Saharan Africa.

The new effort will be able to reach Africans in 21 countries where malaria is endemic, the two groups said in a joint press release.

“The goal of this partnership is to decrease sickness and death due to malaria, build local organizations’ capacity to mobilize their communities against this disease, and strengthen connections across faith denominations, sectors and countries in order to share knowledge and develop best practices,” Episcopal Relief & Development President Rob Radtke said in the release.

“The strength of our NetsforLife® program and UMCOR is that we both work with churches and other grassroots institutions to fill gaps in health service coverage – mostly in rural areas – and develop solutions that fit the context and challenges of each locality.”

NetsforLife® fosters a “net culture” in communities by combining distribution of long-lasting insecticide-treated nets with community organizing and education about malaria prevention, proper net use and maintenance. Much of the work, including ongoing monitoring and evaluation of net use, is done by trained local volunteers.

Since 2006 when Episcopal Relief & Development began to manage NetsforLife®, the program has expanded from eight to 17 countries. It has distributed more than 8.5 million nets, trained nearly 74,000 volunteer malaria control agents and reached more than 25 million Africans, according to statistics here. Between 2006 and the end of 2011, the nets have saved the lives of more than 100,000 children under the age of five and reduced the overall malaria-related death rate by 45 percent in communities where NetsforLife® is active, the program said here in April.

The Episcopal-Methodist partnership began informally in 2010 and has been particularly effective in areas of the Democratic Republic of Congo and Sierra Leone, according to the release.

Shannon Trilli, director of UMCOR’s Global Health Initiative, said, “There is still much to be done in our malaria prevention work, especially at the community and village level. By joining UMCOR’s resources and expertise in developing health-care infrastructure and communications to the NetsforLife® programming, monitoring and evaluation approach, we can strengthen and deepen our impact.”

In the Democratic Republic of Congo, the relationship led to the successful mobilization of communities through a public launch event hosted by South African singer Yvonne Chaka Chaka. The event was followed by a door-to-door distribution of 30,000 nets and the founding of CORESA, a groundbreaking faith-based coalition to promote health, the release said.

NetsforLife® and UMCOR aligned their work with the National Integrated Maternal and Child Health Campaign in Sierra Leone, where approximately 400,000 nets were distributed and more than 3,800 volunteers were trained. Aimed at achieving universal coverage of the population at risk of contracting malaria, the project was the largest health effort in the country’s history, according to the release.

The two organizations will now work together and in partnership with others in Angola, Botswana, Burundi, Cote D’Ivoire, Ghana, Guinea, Kenya, Liberia, Malawi, Mozambique, Namibia, Nigeria, Rwanda, Sudan, South Sudan, Tanzania, Uganda, Zambia and Zimbabwe, as well as continuing the work in the Democratic Republic of Congo and Sierra Leone.

The Episcopal effort is funded in part by the NetsforLife® Inspiration Fund which aims to educate, engage and unite Episcopalians to support the Millennium Development Goals and fight against malaria. It also hopes to raise $5 million by December to help NetsforLife® continue its work.

The fund has its roots in the 75th meeting of General Convention in 2006 when the Episcopal Church endorsed what became known as the Millennium Development Goals Inspiration Fund. It raised more than $3.2 million in three years. In 2009, the church renewed that support by endorsing the NetsforLife® Inspiration Fund and contributing 0.7% its triennial budget as seed money (about $800,000) for the effort.

The United Methodist Church’s Imagine No Malaria project hopes to eliminate death and suffering caused by malaria in Africa by 2015. The UMC is a founding partner of the United Nations Foundation’s Nothing But Nets campaign, which works through Imagine No Malaria and focuses on improving health infrastructure and empowering communities for a sustainable victory over the disease, according to the release.

Malaria used to kill nearly one million people each year — most of them children younger than five years. Now the World Health Organization estimates 655,000 died last year, a reduction credited to anti-malaria campaigns. Sleeping under insecticide-treated nets is a simple yet highly effective way to reduce the incidence of malaria. However, it is not easy to convince people to sleep under nets.

NetsforLife® teaches people about malaria and why sleeping under long-lasting insecticide-treated nets is crucial to avoid contracting malaria. It encourages recipients to keep using the nets, in part by helping them understand that the decrease in the number of times family members get sick from malaria is related to the fact that they are sleeping under nets.

Radtke told the church’s Executive Council in 2011 that “NetsforLife® has changed the way the entire global health community is thinking about how to eradicate malaria.”

The change is happening because the agency’s statistics show that its efforts have resulted in greater and more sustained net use. The global health community considers sustained use of nets to be “the holy grail” of malaria prevention, he said.