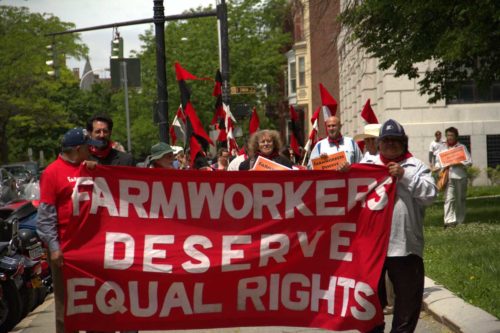 Rural & Migrant Ministry organized an interfaith delegation of more than 100 civil rights advocates, clergy and farmworkers from across New York state to spend “Farmworker Day” in Albany on May 21. ENS photo/Lynette Wilson

[Episcopal News Service] Fifteen years ago Rural & Migrant Ministry began advocating for New York’s farmworkers with the goal that the state’s labor laws be modified to extend basic labor rights and protections to the men and women who work in the fields, the orchards and the food-processing plants that comprise the state’s $3 to 4 billion agricultural sector.

On May 21, RMM organized an interfaith delegation of more than 100 civil rights advocates, clergy and farmworkers from across the state – some traveling more than four hours one way by bus – to descend on Albany for “Farmworker Day,” to once again to ask legislators – mainly senators – to pass the Farmworkers Fair Labor Act. If passed, the law would grant farmworkers a day of rest, overtime pay and workers’ compensation, collective bargaining rights, and would extend public health sanitary codes to migrant worker’s camps.

“I am proud to be here today on Farmworker Day to help bring to the attention of our legislative leaders that this is a basic human right, to be treated with equality in terms of wages and other opportunities that other labor groups have,” said Rochester Bishop Prince Singh in an interview with ENS in Albany.

“But it also to me, as a person of faith and a leader in a faith community, brings to the fore the reality that we need to treat people who bring food to us, to our tables, with some clarity of dignity. All we are asking that they are provided with the same opportunities that other labor groups have.”

In March New York’s Episcopal bishops met with Gov. Andrew Cuomo, and during that meeting made it clear that they supported equal rights for farmworkers, Singh said.

Since the 1930s, farmworkers have been excluded from both federal and state laws that protect other labors. Legislators have repeatedly introduced legislation to assure agricultural workers these rights during the past 15 years. In 2010 the bill failed by four votes in the New York Senate; the New York Assembly has historically passed the bill.

“Every year it passes in the Assembly and gets stalled in the Senate,” said the Rev. Michael Phillips, rector of The Church of the Holy Trinity in Manhattan, who rode the bus from the Cathedral of St. John the Divine to the capitol. “It’s an issue of justice: Why deny farmworkers labor rights?”

There are an estimated 80,000 farmworkers in the state and some 35,000 farms. Latinos comprise 78 percent of all farmworkers and 99 percent of farmworkers are foreign born, according to the Hudson Valley Farmworker Report published in 2007.

Phillips, who coordinated the groups from Manhattan and New Paltz, where on its way north the bus stopped to pick up additional people, warned that while speaking with legislators and/or their aides that the supporters not allow the conversation to be steered toward immigration.

“Legally or illegally, they are doing the work.” 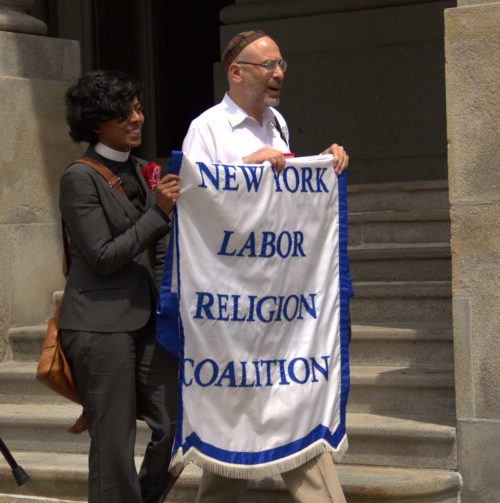 The Rev. Winnie Varghese, of St. Mark’s Church In-the-Bowery, and Rabbi Michael Feinberg, executive director of the Greater New York Labor-Religion Coalition, during the May 21 march to the capitol. ENS photo/Lynette Wilson

Members of the delegation gathered at Westminster Presbyterian Church for an orientation, followed by a march to the capitol, visits to the offices of legislators — both opponents and supporters — and held silent vigils during which they held orange signs with black letters that read “Farmworkers Deserve Equal Rights.” Singh and other leaders, farmworkers and elected officials took part in a press conference organized by the New York Civil Liberties Union.

“The New York Civil Liberties Union is proud to stand with labor, human rights, religious and political leaders to call on the New York State legislature to correct an 80-year-old wrong and finally pass the Farmworker Fair Labor Practices Act. Eighty years ago, when the New Deal established major reforms to worker’s rights, farm workers were excluded because back then farmworkers were black and that’s the deal that southern segregationists insisted on to support reform. Today New York’s farmworkers are overwhelmingly Latino, but for them Jim Crow is still the law of the land when it comes to their labor rights,” said Donna Lieberman, NYCLU’s executive director during the press conference.

“… Jim Crow was wrong then, it’s wrong now and it’s time to close the gap for basic worker protections … it’s time to ensure that the people who do the back-breaking work to putting food on our tables enjoy the basic protections and basic dignity that every individual working in New York state deserves and expects,” she said.

At the start of the press conference, the Rev. Richard Witt, RMM’s longtime executive director and a priest in the Diocese of New York, placed a bushel of apples on the table next to the speaker’s podium. The bushel, he said, weighed 48 pounds. Apple pickers typically pick up to 168 bushels in an eight- to-10 hour workday. 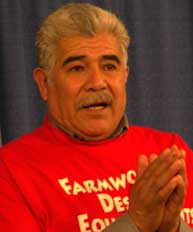 “It’s a heavy job but we are proud to do it because we need this for our lives,” said Sostenes Uribe, a farmworker and an American citizen, who injured himself picking apples and was subsequently fired from his job. “I come here in the name of all the farmworkers to raise the voice to pass the farmworkers bill.”

Uribe, who spoke in Spanish through an interpreter during the press conference, said farmworkers often feel they go unnoticed and that he participated in the event to help raise their voices.

Peggy Alt and her husband, Wayne Alt, a member of the United Church of Christ and a past RMM board member, traveled with the bus from Buffalo to Albany to participate in the day’s events.

Despite the fact that consumers have become more conscious about food quality and the distance it has traveled, it’s been a slow process to bring consumers around to care about farmworker’s rights, said Peggy Alt, adding that part of the reason is that farmworkers tend to work behind the scenes.

“We’ve tried every single way we can figure to just get attention,” said Witt, adding that once a year a delegation visits Albany, but that advocacy work continues at the local level throughout the year.

“The thing that really captures it for me is that when we lost by four votes in the Senate two years ago, one of our youth looked at me when I was feeling really down and she said, ‘Well you know Moses was in the desert 40 years. Get over it.’ So it’s one of these things we just keep putting one foot in front of the other figuring that something is going to happen.”

Progress has been made, however, over the years, Witt continued.

Ten years ago, Witt said, legislators wouldn’t give RMM the time of day. “Now we are meeting with the majority leaders, prominent senators … so the voice of the farmworkers is getting more and more included — it’s just not being honored yet. And one of that ways you know that it’s getting more and more included is that you see the Farm Bureau and agribusiness stepping up their efforts to combat it.”

The Business Council of New York State and the New York Farm Bureau — which according to its website “is a non-governmental, volunteer organization financed and controlled by member families for the purpose of solving economic and public policy issues challenging the agricultural industry” — are on record in opposition to the bill.

“The agricultural workforce is a crucial part of our state workforce. Because of its unique nature, this workforce in this industry was exempted years ago from regulations that generally apply to other groups of employees. These conditions have not changed and have become even more important due to global competition and the increase in the advantages of sourcing locally,” says a legislative memo on the Business Council’s website confirming its alliance with the Farm Bureau.

According to the Farm Bureau, 99 percent of the state’s 35,000 farms are family owned.

The argument often raised by the bill’s opponents that without the benefit of cheap labor, the smaller family farms cannot compete “is just ludicrous,” said Gerardo Gutiérrez Jr., an attorney and RMM’s Justice for Farmworker’s campaign coordinator, adding that if anything, higher costs for industrial farms allow smaller farms to compete.

Only four states – California, Maryland, Minnesota and Hawaii – and the commonwealth of Puerto Rico have laws protecting the rights of farmworkers, Gutiérrez said.

The California Agricultural Labor Relations Act was passed in 1975, establishing collective bargaining rights for farmworkers. The law’s passage was largely the result of a grassroots effort led by Cesar Chavez, the Mexican-American labor leader and civil right activist.

New York, by passing a law to protect the rights of farmworkers, could help break down the Farm Bureau’s argument for cheap labor and serve as an inspiration and a model for other states, said Witt.

“If you have both California and New York doing something, it’s harder to argue that by providing equality to farmworkers it’s harder to compete. California has been doing quite well with it for more than 40 years.”

— Lynette Wilson is an editor/reporter for Episcopal News Service. She traveled with the group from Manhattan to Albany to report this story.