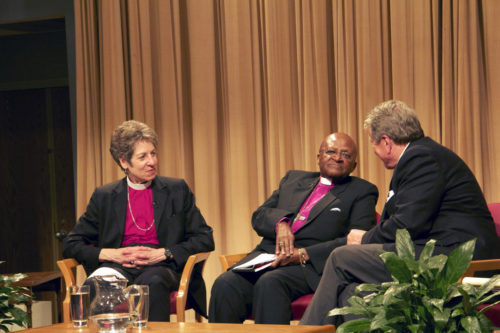 [Episcopal News Service – Washington, D.C.] Archbishop Emeritus of Cape Town Desmond Tutu shared a personal story from his childhood during a mission-focused conversation May 19 at Washington National Cathedral, a story that has stuck with him for more than 70 years.

The 30-minute, live webcast conversation between Tutu and Episcopal Church Presiding Bishop Katharine Jefferts Schori was moderated by David Crabtree, a news anchor at WRAL-TV in Raleigh, North Carolina, and a deacon in the Diocese of North Carolina. It is available on demand here.

Tutu told a story about his mother, a poorly educated domestic worker, who cooked and cleaned for blind, black women during an age in South Africa “when blacks were ‘inferior,’ or so they were told,” he said, adding that on this particular day, when he was 8 or 9 years old, he was standing with his mother at her place of work.

“I saw something that I never thought,” said Tutu in a soft voice. “There was a white priest in a long flowing cassock and he had a large sombrero hat, and as he passed he doffed his hat to my mother. White priest, black woman in apartheid South Africa…. For him it is the normal thing that you do for any woman. This is how he demonstrated that he believed that each of us is a God carrier … I wasn’t aware that it was something that would stay with me. I am 80 now.”

The priest was Trevor Huddleston, a well-known anti-apartheid activist who later became archbishop of the Anglican Province of the Indian Ocean.

“I still remember the impact of Trevor Huddleston’s doffing and that was acknowledging what we say in our theology, ‘you are created in the image of God and you are a God carrier,’ and that is what we in our proclamation seek to be saying….”

Crabtree asked Tutu and Jefferts Schori to define mission, where the church is concerned, and “how we best carry it out.”

“Mission is really making us all aware of the incredible love that God has for all of us,” said Tutu. “It says things like, do you know what, you don’t have to earn God’s love. God loves you, period, and everything flows from there.”

Jefferts Schori said, as Tutu pointed out, that mission is about receiving love and then responding by going out into the world to spread that love.

The conversation centered on the Anglican Five Marks of Mission. Crabtree asked, in reference to the first mark, “To proclaim the Good News of the Kingdom,” how do you bring that proclamation to a world so in need of the message, but mired in doubt?

The question reminded Jefferts Schori of an encounter she had some years ago in a nursing home where a woman was wearing a sweatshirt that read on the front: “‘Jesus loves you’ and on the back it said, ‘but I’m his favorite.’ We all have a sweatshirt like that. We are all God’s favorite. But we need people to remind us of that,” she said.

The doubt, she continued, “is an opportunity for someone else to reach out and respond; it’s an opportunity to grow in your confidence that you are that deeply, and abundantly and eternally loved, but it doesn’t happen for most of us without that fleshly encounter.”

What we seek to say in the proclamation, Tutu responded, is not that the world we live in is a paradise, but that we do have an omnipotent God who “waits for us that we will be coworkers with this God.”

“And that is our privilege and our responsibility: to help turn this wilderness into the garden that God had always intended his world to be,” said Tutu, who served as archbishop of Cape Town and primate of the Anglican Church of Southern Africa from 1986 to 1996.

The Anglican Consultative Council, the Anglican Communion’s main policy-making body, between 1984 and 1990 developed the Five Marks of Mission to offer parishes and dioceses worldwide a practical and memorable “checklist” for mission activities.

The Five Marks of Mission are:

1. To proclaim the Good News of the Kingdom,
2. To teach, baptize and nurture new believers,
3. To respond to human need by loving service,
4. To seek to transform unjust structures of society, and
5. To strive to safeguard the integrity of creation and sustain and renew the life of the earth.

In reference to Tutu’s story about the respect shown to his mother by Huddleston, the second mark and the Baptismal Covenant’s promise to respect the dignity of every human being, Crabtree asked: “How do we better doff our hats to people?”

Jefferts Schori, who early on had been educated in a Roman Catholic school and was taught to curtsy whenever encountering a nun in the hallway, said she learned a lot from monastic tradition, where in recognition of God you bow to your brothers and sisters in community.

“If we walked through life in that way,” giving thanks and recognizing the image of God “everywhere we go, the world would work differently, very differently,” she said. “We live in a society that so often assumes enemy rather than image of God.”

In response to a question from Crabtree about how best to meet respectfully the needs of others, Jefferts Schori talked about the necessity for self-compassion.

“When we have a sense of our own wilderness and have some compassion for ourselves, we can then have compassion for others. It is essential to be able to see that wounded human being who is in need of partnership,” she said.

“That is the only avenue when we can be co-healers, co-creators with God in responding to that wound. I think that is the salvation of the world. But it requires finding the vulnerability in your own soul.”

Segueing into the fourth mark of mission, “transforming unjust structures of society,” Crabtree observed that finding that “vulnerability” can be “like swimming upstream” attempting to correct society’s unjust structures. “Yet you have to keep pushing bit by bit and trusting that God sees the pushing because we know God does see that …”

Speaking from his experience as an anti-apartheid leader in South Africa and witnessing the oppression and injustice many faced, Tutu said there was a time when many in the world, and even some of the leaders of the movement themselves, could have said, “this ghastly system, there is no way in which we can overturn it.”

“Well,” he laughed. “Remember what happened? People in South Africa did their thing, but it was very largely the support that we got from the international community, the anti-apartheid movement, you know those alliances that we had, young people demonstrating and working for divestment, and here we are today.

“In the 1980s and even in the 1990s, many were saying no, the only way that thing is going to be resolved in South Africa is through an awful, racial bloodbath, but it didn’t happen. And it was because of an alliance of people around the world.”

Tutu received the Nobel Peace Prize in 1984 for his efforts to end apartheid. Following the fall of apartheid in 1994, he headed South Africa’s Truth and Reconciliation Commission.

Crabtree, who had remembered seeing Tutu on ABC’s “Nightline” with Ted Koppel in the 1980s, asked him when he realized that he had to partner with God in fighting apartheid. “You didn’t just appear there you had already been in this fight for a long time,” Crabtree said.

Again, Tutu laughed and said, “I don’t know. One, I suppose is to be careful what you ask God to do with you, ‘when you say here I am use me,’ and God takes you at your word.”

He said that the success of the anti-apartheid movement was due to the outpouring of prayers from around the world, adding that he was just one person involved in a much larger community. “You knew you were part of something that would ultimately not be defeated,” he said.

Regarding the power of prayer, in a follow up question posed by ENS following the webcast, Tutu said: “One of the wonderful things is that God does not usually let us know where our prayers really work on this side of death because we, like it or not, we’d get slightly swollen heads. But the fact that prayer works is not in doubt.”

Also following the webcast, Jefferts Schori said the work she does is “undergirded by prayers and the strength comes from places that I don’t know where. And there is a sense of peace in the midst of it that comes, I believe, from the prayers of many, many, many people.

“I cannot do the work I do without that. I could not do it without that. And it’s an immensely humbling experience to realize that.”

At the start of the webcast, before moving the conversation to mission, Tutu took a moment to commend the Episcopal Church for its “generosity and gentleness of spirit” when it could have been “abrasive” in its response to recent challenges in the Anglican Communion.

Crabtree wrapped up the conversation on mission by addressing the fifth mark, “To strive to safeguard the integrity of creation and sustain and renew the life of the earth.”

“God set us in this garden to care for it because it is the source of physical life for all that is,” Jefferts Schori said.

“Christians have unfortunately in our history often misunderstood dominion as taking it for private property. It’s about house-holding, husbanding, and housekeeping carrying for the stuff of creation.

“It will be healed as we grow into a greater consciousness that we are all intimately connected … we are a dynamic community … and we cannot dismiss any part of it – the whole of its being is essential to our life and to the life of every other human being and every other creature on this planet,” she said.