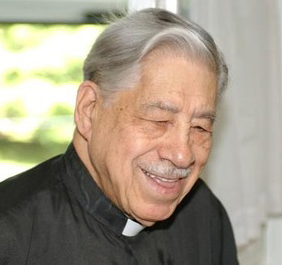 [Episcopal News Service] Services will be held May 11 and 12 for the Rev. Canon Thomas Wilson Stearly Logan, Sr., 100, associate priest of the African Episcopal Church of St. Thomas, Philadelphia, who died May 2.

The eldest serving African American priest in the Episcopal Church, Logan was a civil rights pioneer and a long-term leader of the Conference of Church Workers Among Colored People (CCWACP), which was the precursor to the Union of Black Episcopalians.

Visitation and viewing will be held on Friday, May 11, from 5 to 7 p.m. at the African Episcopal Church of St. Thomas, followed by Vespers from 7 to 9 p.m. Viewing will also be held on Saturday, May 12, 9 – 11 a.m. at the Philadelphia Episcopal Cathedral, with the burial service following at 11 a.m.

Logan served as rector of Calvary Church Northern Liberties in Philadelphia, and was named rector emeritus when he retired in 1984.

He was a life member and former board member of the NAACP for Philadelphia and Darby, Pennsylvania, and worked with Martin Luther King, Jr. in organizational and fundraising efforts in Philadelphia to support civil rights strategies.

Logan served the church and society in a number of leadership roles, including Diocesan Council (Diocese of Pennsylvania) and the Brotherhood of St. Andrew; as president of Hampton University Ministers’ Conference; as delegate to the Anglican Conference in Cape Town, South Africa; and as president of the Homeless Fund and National Church Workers Conference U.S.A.. He was also a life member of Alpha Phi Alpha Fraternity, Inc.

He was a leader in a number of fraternal and civic organizations, including the Improved Benevolent Protective Order of Elks of the World, Frontiers International, and the Restitution Fund Commission. He also was an active member of the Shriners and of Prince Hall Masonry.

His services have been honored many times with awards and citations from church and civic organizations.

Logan was ordained to the diaconate in 1938 and to the priesthood the following year. He served churches in Yonkers, New York, and in New York City and Philadelphia. He also was a chaplain at Philadelphia Presbyterian Hospital and the city’s police department. In 1945, he helped merge Calvary Monumental Church with St. Michael’s Church, creating one of Philadelphia’s first interracial congregations.

UBE honored Fr. Logan in 2008 at its 40th annual meeting and conference in New Jersey. St. Thomas’ Church marked his 100th anniversary with a celebration in March 2012.

“Fr. Logan’s ministry to the church of civic engagement, humanitarian service and ecumenism was extensive,” said John E. Harris, Jr., UBE president. “He exemplified refinement and a steadfast faith as a follower of Jesus Christ. We are forever blessed by his evangelism, guidance and leadership.”

Logan was born in Philadelphia on March 19, 1912, one of eight children of a minister and a teacher. In 1938 he married Hermione Hill, who survives him. The couple had one son, the Rev. Thomas W.S. Logan Jr., who died in 2011.  Other survivors include a brother, a sister, five grandchildren and four great-grandchildren.

An obituary from the Philadelphia Tribune is here.

— Compiled by ENS staff from reports from General Theological Seminary, the Union of Black Episcopalians and the Archives of the Episcopal Church.