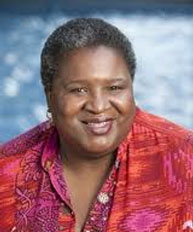 [The United Methodist Reporter] The other day, in an attempt to get some distance between me and the traumatic event now forever etched in my brain as General Conference 2012, I decided to brave the Texas heat and work on my flowerbeds and ideas for the lawn. Isisas Barrario, my faithful landscape and lawn man for over eight years, stood by me in the heat as we discussed what to do about the yard. It’s important to know that when Isisas and I first met, I was single, working toward tenure and couldn’t have cared less about my yard except I wanted it cut and to look good—which meant he had the run of the yard. Now, married with a bigger yard and in a nicer neighborhood, I have become more involved. (Gender roles are very hard to break sometime, but that’s another column).

As we looked at the deck, I told him that I saw some nails popping out and that he should get the carpenter to fix them and then get the deck painted. He said, “My friend, the earth around the deck has changed. The sun and rain have taken their toll. It is warped and nailing it won’t fix the problem—the structure is bad. You must tear it down if you want it to do any good.” A gardener had become a prophet right before my eyes and ears.

While many things will be written about General Conference 2012 and its inability to enact real change for the United Methodist Church, here is one thing to take from our week and a half in Tampa: The world around us changed. The heat of the culture wars and the rain of a changing demographic are having huge impacts. We are warped and cosmetic changes won’t help—we must dare to tear down to our foundations if we ever hope to be any good to the world.

Don’t get me wrong. There are dozens if not hundreds of local churches, annual conferences and general agencies who are doing the work of Christ in wonderful ways; but that’s not the issue. That’s like saying all of my boards in my deck aren’t bad and that many of them are working just fine. Because the good boards are attached to a bad structure, in the end they can only do so much good.

Real organizational change cannot happen until an organization reconnects with its foundation—its central mission. This is a lesson I learned from Herb Kelleher and Colleen Barrett, legendary leaders of Southwest Airlines and two of my closest mentors (I didn’t even get married to my husband without them meeting him first). Herb and Colleen often point out that the problem with other airlines is that they believe that they are in the airline business—so they focus on planes, fuel, etc. But at Southwest Airlines, they are in the customer service business and they just happen to use fuel, planes, etc., to ensure that they are serving their customers (which includes their employees, customers, and lastly their stockholders) in an excellent way. Guess what? It works and it has been working well for over 30 years.

The United Methodist Church has so much wonderful potential. As many of my colleagues who study religious organizations point out, it is the only one that has a true opportunity to succeed where other denominations have failed. At its core the UMC has always affirmed education, religious and secular inquiry, the ministry to the poor and those on the margins, and dared to speak when others were silent. Our other chief attribute is that we are a pragmatic people, a people known for our reasonability and rationality. But anyone watching the show (and that’s what it was) on Friday, can tell you that when you have United Methodists standing on tables, shouting down the presiding officer, and engaging in personal attacks on and off the floor of the plenary session, we have more than walked away from reason: we have run from it.

The issue is that the General Conference has powers that it cannot delegate to anyone but the bishops and even then in a limited role. Simply put, only a full delegation from all of Methodism can enact administrative change and no matter how well-equipped another body or bodies may be in executing that legislative and administrative role on their behalf, only 1,000 people can make that decision.

Because our system of governance is based largely on the U.S. system of governance, it encompasses both its laudable ideals and its terrible inefficiencies. I think what is attractive philosophically about this system is it tries to provide for everyone to ensure that whether you are from the South Central and Southeastern Jurisdictions or Central Conferences, which have the most members, or the Cal-Pac Conference, where membership is small, everybody has a voice in our governance. But here is the problem: everybody has a voice.

Our system allows for minority voices (whether of philosophy, race, gender, sexual orientation) to take an active role in the shaping of policy and legislation. This is a good thing. The majority is not always right, especially if it is made up of homogenous point of view. But as Michel Foucault points out, the minority can exercise its own tyranny over the will of the people just like the majority.

Anyone listening to the debate regarding restructuring last week watched an evolution take place. Former adversaries came together and created a coalition that created legislation that was supported by Central Conference delegates, as well as other UMC delegates of all colors, sexual orientations, educations, age and genders. A small minority decided that that because they didn’t get individually consulted that they would use whatever means necessary to stop attempts at reorganization. What really is irritating is that every time I heard, “All voices weren’t represented,” I realized it was code for Adam, Don, Betty, Forbes, Christine or Joe didn’t talk to me personally, so I am offended! Let’s be crystal clear about this: while 40 percent of the delegates did not support Plan UMC, all of them did not support the action taken to take this to Judicial Council. Some were willing to see what reorganization wrought and were willing to come back to the issue in 2016.

Again, winning the battle and losing the war became the strategy of the day. The minority point was clear: if we don’t like what you do or we don’t feel like you gave us enough deference, we will shut it down regardless of whom it hurts. Funny, whether it’s Grover Norquist and the Tea Party or the Methodist Federation for Social Action, the rhetoric of organizational hostage-taking has the same effect—polarization, distrust and, in the end, slow, agonizing, organizational death.

One of my students in Organizational Communication could look at this mess called GC2012 and diagnose the problem immediately: An 18th Century structure cannot sustain a 21st century global organization. We must be willing to let go of the non-essentials to get back to the first fruits and ideals of why we are a People called Methodist. Asking 1,000 people to make organizational decisions and restructuring is not only dangerous, it is impractical for long-term survival. Being limited by a BOD that has increased in regulation but decreased in effectiveness is an indication that we have become all sound (and petitions) and very little fury or significance. While as a denomination we will not disappear over the next four years, I believe that the Fat Lady has taken off her kaftan and is looking through sheet music and for an evening gown.

We must Rethink Church (which is a wonderful campaign if I must say so myself). We are not in the agency business. We are not in the conference business. We are in the soul-saving and soul-sustaining business. Agencies, boards, conferences, elders, deacons, and laity are just the resources we use to do that God-given business. Let’s create a governance structure and reorganization that places this priority first. Over the next weeks I will be exploring how I think that can happen.

In the meantime, repeat with me: Hello, My Name is United Methodist Church and I need to change.