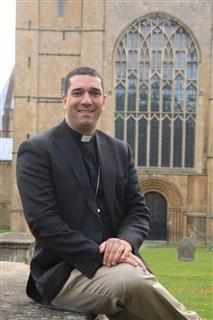 [Episcopal News Service] The Rev. Canon Hosam Elias Naoum has been named dean of St. George’s Anglican Cathedral in Jerusalem. He will become the first non-English incumbent to serve in the position.

Naoum, 38, has served as canon pastor at the cathedral since 2005, and was the acting dean from 2007-2009. As dean, Naoum will continue to serve as pastor to the cathedral’s Arabic- and English-speaking congregations.

“I call upon all our partners and friends around the Anglican Communion to hold Hosam and his family in their prayers,” said Anglican Bishop in Jerusalem Suheil Dawani in a May 3 letter announcing the appointment. “May his term as the dean of the cathedral be a blessing to many and to the glory of God.”

Following the announcement, Naoum told ENS: “I am so happy that I am in this position to serve not only the local diocese but the whole Anglican Communion. … This cathedral will always be a welcoming and hospitable place for many pilgrims and visitors.”

Naoum said he appreciates the “trust and confidence” shown in him by Dawani and Archbishop of Canterbury Rowan Williams, both of whom gave their blessing to the appointment.

He also acknowledged his gratitude to Episcopal Church Presiding Bishop Katharine Jefferts Schori who, he said, has been “very supportive to the diocese and to me personally.”

Dawani said the appointment comes “after a long time of discernment and prayer and a lawful and constitutional procedure. Canon Hosam will continue to serve, especially in his new capacity as the dean of St. George’s Cathedral, both the Diocese of Jerusalem and the worldwide Anglican Communion.”

Naoum completed his initial theological training at the College of the Transfiguration and Rhodes University in Grahamstown, South Africa, and in 2011 earned a Master of Theology degree in Canon Law from Virginia Theological Seminary in Alexandria. Dawani also is a graduate of VTS, most recently earning a Doctor of Divinity degree in 2006.

The Very Rev. Ian S. Markham, dean and president of VTS, said in a statement that the seminary “considered it a privilege to train Canon Naoum for this important ministry. We celebrate with him and his family as he becomes the dean of the cathedral. We commit to remembering him in our prayers as he takes the important position both for Jerusalem and for the Anglican Communion.”

The cathedral was consecrated in 1898. Today, it is home to two congregations: the indigenous Palestinian Anglicans, often called the “Living Stones,” and a community of expatriate English-speaking members.

The Diocese of Jerusalem includes parishes and institutions throughout Israel, Jordan, Lebanon, Palestine and Syria.

Prior to moving to St. George’s, Naoum spent nine years as priest of St. Philip’s Episcopal Church in Nablus, a town in the West Bank.

Naoum will be installed as dean in St. George’s Cathedral on Ascension Day, May 17, at 11 a.m. Archbishop Fred Hiltz of the Anglican Church of Canada will preach.

Hosam is married to Rafa. They have a son, Wadi, and two daughters, Laurice and Krista.