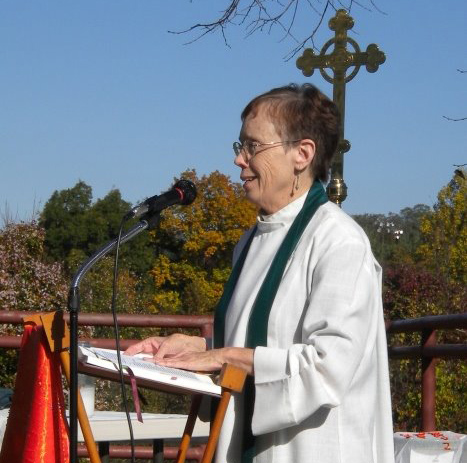 Editors note: This story was updated at 2:12 EDT May 7 to include funeral information and other details.

[Episcopal News Service] The third victim in the May 3 shootings at St. Peter’s Episcopal Church in Ellicott City, Maryland, has died.

The Rev. Mary-Marguerite Kohn, 62, died May 5 at University of Maryland Shock Trauma Center in Baltimore where she had been taken after the shooting and placed on life support.

Brenda Brewington, 59, the parish’s administrative assistant, on May 3 had been pronounced dead at the scene in the parish office.

The presumed assailant, identified by the Howard County Police Department as Douglas Franklin Jones, 56, was found in woods adjacent to the church. He died of a self-inflicted gunshot wound and a gun was found nearby, police said in a May 4 statement. Police located a campsite in the woods with personal belongings and believe Jones was living there.

“St. Peter’s has a long history of caring for the poor and needy in Howard County, a tradition formed at the very birth of this church in 1842, and a ministry that was lovingly continued by the Rev. Mary-Marguerite Kohn and Brenda Brewington until the tragic events of May 3,” Craig Stuart-Paul, St. Peter’s warden, said in a statement.

Stuart-Paul later pledged that the parish’s ministry would continue “and we won’t do it from behind bulletproof glass.”

The church offered support to mill workers and laborers since the city’s founding, continuing this service until a fire in 1939 destroyed the church. St. Peter’s was rebuilt, using many of the burned bricks from the former site, as well as labor from the then-rector the Rev. Julius Velasco, and re-opened in 1940, according to the statement.

St. Peter’s members gathered May 6 for a private Eucharist to mourn the shootings and deaths. “It began the process of healing,” Stuart-Paul said after the service.

“Many in the diocese wondered how long it would take until the congregation could meet in this space,” Diocese of Maryland Bishop Eugene Sutton said at St. Peter’s on Sunday, according to a Baltimore Sun newspaper report. “How long did it take? Not long.”

Stuart-Paul said Brewington and Kohn were the “kindest, biggest-hearted ladies you would ever meet” and said they were “all about giving.” Kohn’s organs were donated after her death and the donations “speak something about the kind of woman she was,” he added.

Howard County Police investigators have learned that Jones had recently been involved in a dispute with church members, they said in the statement. He visited the church regularly to access their food bank, but recently had become belligerent and argumentative. Police believe Jones’ anger with the church may have been the motive for the shooting, but don’t believe any specific person or people were targeted. No one else was in the building at the time of the shooting.

While some earlier news reports said that Jones had been turned away from the parish’s food pantry because he came more often than policy allowed, the Sun reported  that the Rev. Kirk Kubicek said during the May 6 service that Brewington had been taking Jones to the food pantry at the time of the shooting.

A custodian came upon Brewington and Kohn about 5:20 p.m. May 3 in the parish office and called 911, she said.

Sutton, Kubicek and other clergy who attended the Eucharist said prayers of healing over the office area prior to the service.

There is anger toward Jones, he said, “but also acknowledgment that he was a victim, although he caused victims as well. We are followers of Christ, and so the process of forgiveness has already begun.”

The Baltimore-based diocese held its 228th convention May 4-5 and began with prayer for the victims. The convention passed a condolence resolution that also called on congregations to “make appropriate provisions for the safety of their clergy, administrators, and other staff members.”

Expressing “our deep concern for all victims of gun-related crimes,” the convention also said in the resolution that it “pledges to recognize and address the needs of homeless persons in our communities, as well as the needs of our brothers and sisters who suffer from mental illness” and to “challenge and condemn the violence which infects our society and relationships, and to seek peaceful means to address conflict and strife.”

“Our Church, which we regard as a Sanctuary, has been violated by this senseless tragedy, leaving us feeling vulnerable, betrayed, and angered,” the convention said in the resolution’s explanation. “But our Church is also a holy icon, a gift to the world from the God of love and forgiveness. In this time of wounding, death, and brokenness, we stand with all victims and we offer our sanctuaries as places of healing, witnessing to God’s peace amidst violence and to the unbroken love that God has for all.”

Kohn’s funeral will be held May 8 at 3 p.m. EDT at the Cathedral of the Incarnation in Baltimore. Donations can be made in her name to St. Peter’s and will be disbursed among several organizations and ministries Kohn supported, the diocese said.

Brewington’s life will be remembered May 10 at 1:30 EDT at St. John’s Episcopal Church, which is also in Ellicott City. Interment will follow in that parish’s cemetery.