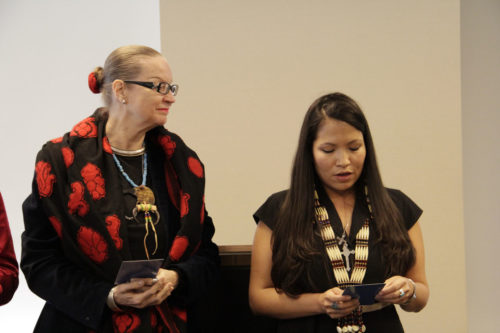 [Episcopal News Service] In the 1850s, native people living in the western United States signed “peace” treaties with the U.S. Government in exchange for land; land that was to provide a safe homeland and economic opportunities, explained Cheryle Kennedy, chairwoman of the Confederated Tribes of the Grand Ronde of western Oregon, during an ecumenical panel discussion May 7 at the United Nations Church Center.

A century later, in 1954, in an “act of termination,” when the government took the land back and stripped the native people of their indigenous status, “many bad things happened, but we were not broken,” she continued.

In the 1970s, the confederated tribes resolved to overturn the government’s decision and by 1983 their indigenous status had been restored; in 1986, 10,000 acres had been returned. Since then, Kennedy said, they’ve been buying back land “acre by acre.”

The Episcopal Church and other faith groups were among the sponsors of the U.N. panel session, titled “Churches Disavow the Doctrine of Discovery: Calling for Poverty Alleviation and Healing,” which sought to address education, land rights, reconciliation, healing and practical next steps. It was attended by nearly two dozen people.

The panel discussion took place on the first day of the 11th session of the United Nations Permanent Forum on Indigenous Issues (UNPFII), meeting May 7 – 18 and themed “The Doctrine of Discovery: Its enduring impact on indigenous peoples and the right to redress for past conquests (articles 28 and 37 of the United Nations Declaration on the Rights of Indigenous Peoples).

The “Doctrine of Discovery” refers to international laws that were understood to set forth the ways in which colonial powers laid claim to newly discovered territories beginning in the early 1500s and continuing through the 1700s. (Throughout the 19th century, it was believed that the United States, specifically people of Anglo-Saxon descent, were destined to expand across the continent, in what was referred to as “Manifest Destiny.”)

The 2009 meeting of the General Convention of the Episcopal Church passed a resolution (2009-D035) repudiating the Doctrine of Discovery. The Anglican Church of Canada took a similar action in 2010, followed by the World Council of Churches in 2012.

The hurt left by the doctrine on North America’s native people can be seen in the form of high suicide rates, alcohol and drug abuse, and the prevalence of violence and rape. It’s not easy to enter into the work of reconciliation; and it’s easier for non-native people to walk away and ignore the acts of their ancestors, said Eagle Heart.

“It’s much, much harder to sit together and face the pain,” she said. “Healing from excruciating pain is still needed today.”

Following the eviction from the Garden of Eden, the Bible is full of stories that focus on human communities and their striving to return “to a homeland that will be a source of blessing for the whole community, said Jefferts Schori during the panel.

“Through the long centuries, the prophetic understanding of that community has broadened to include all the nations of the earth. Even so, the seemingly eternal struggle between dominators and stewards continues to the present day.

“Most of the passages in the Bible that talk about land are yearning for a fertile place, where people are able to grow crops, and tend flocks, and live together in peace. The offspring of those first human beings gave rise to people who hungered for land, and many of them did a great deal of violence through the ages in order to occupy and possess it. The Christian empires of Europe were consumed with battles over land for centuries, and eventually sent military expeditions across the Mediterranean in a quest to re-establish a Christian claim on what they called the Holy Land,” she continued.

Miller, the law professor, talked briefly about international law and the Doctrine of Discovery, going back to the Crusades, when Rome and the Christian monarchies of Europe set out to dominate the world and subjugate and enslave all non-Christian people.

In 1436, Pope Eugene IV issued a papal bull giving control and sovereignty of the Canary Islands to Portugal, rather than Spain, which then sent Portugal on the path to colonization down the western coast of Africa. Spain, feeling left out, headed west. In 1493, Pope Alexander VI issued four papal bulls that, in effect, divided the “new world” in half; splitting it between Spain and Portugal, said Miller.

“When the Europeans showed up, native people lost title to their land,” he said.

Other European nations followed, staking claim to territories by planting flags and crosses, but it wasn’t until 1823, with Johnson v. McIntosh, that the United States defined the Doctrine of Discovery, as “discovery” and “conquest,” limiting tribal land and sovereignty rights. The court case, which involved a land dispute between two white men in Indiana, became the international model, added Miller.

Even today, said Augustine, indigenous people are being “colonized.” Augustine works with indigenous people in Suriname who have been displaced and made sick by the growth of the mining industry in that small South American country, which until 1975 belonged to the Netherlands.

“The people I help need help every day,” said Augustine, urging those present to encourage aid to indigenous people through the support of grassroots movements. She also urged support for nations such as Suriname and the United States to adopt the U.N. rights of indigenous people into their constitutions.

The May 7 panel was co-sponsored by the Episcopal Church, the Anglican Communion, the World Council of Churches, the Mennonite Central Committee, the World Federation of Methodist and Uniting Church Women, The Grail (an international women’s movement), the Gray Panthers, U.F.E.R. – International Movement for Fraternal Union among Races and Peoples, Suriname Indigenous Health Fund, the NGO Committee on the U.N. International Decade of the World’s Indigenous Peoples, the Salvation Army, the World Christian Student Federation, and Office of the Chaplain of the Church Center for the United Nations.