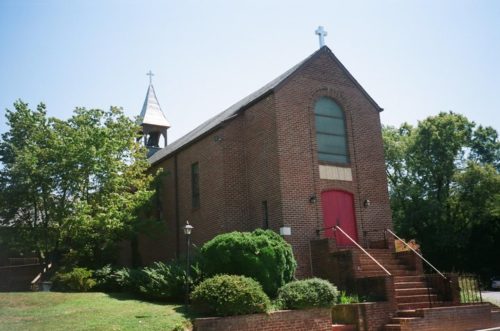 St. Peter’s Church in Ellicott City, Maryland, where a church worker and the parish’s co-rector were found shot inside the office May 3. Administrative Assistant Brenda Brewington died at the scene; the Rev. Mary-Marguerite Kohn is in critical condition.

The presumed assailant appeared to have killed himself near the church.

A custodian came upon Brewington, 59, and Kohn, 62, about 5:20 p.m., Sherry Llewellyn, a spokeswoman for the Howard County Police Department, said during a media briefing outside the church. The custodian called 911, she said.

SWAT members later found an unidentified man dead with what appeared to be a self-inflicted gunshot wound, a police department press release said. A gun was located near the body, according to the police.

The man was found in woods behind the church, Washington, D.C. television station News Channel 8 reported.

Columbia Patch reported that the man was found as police canvassed the church and the area looking for suspects.

The Baltimore Sun newspaper reported that police announced about 7:45 p.m. that they had found the man.

“We’re still working to confirm the identity of the suspect,” Llewellyn said May 4, according to the Sun. “We expect that confirmation and family notification any time.”

Author and educator Diana Butler Bass, who is scheduled to speak at the diocese’s 228th convention May 4-5, said on her Facebook page that the presumed assailant was “an unbalanced homeless man.”

Clergy on the staff of the Baltimore-based Diocese of Maryland went to the scene to pray over the victims and to be with parishioners and staff, the diocese said in a statement May 4. The diocese delayed the beginning of convention May 4 in order to pray for the victims. Grief counseling is being offered to participants and there is a Daughters of the King-sponsored chapel available, according to Sharon Tillman, director of diocesan communications.

Kohn was taken to Maryland Shock Trauma Center in Baltimore where she is in critical condition.

The diocese is “saddened beyond words by the shootings,” it said in its statement. Nearby St. John’s Episcopal Church, also in Ellicott City, opened its doors on May 3 to “to offer a place of support and prayer,” the diocese said. St. John’s also formally offered prayers May 4 from noon to 1:00 p.m. in its Chapel of the Resurrection. “You are welcomed to come and pray for our community and for those who are grieving at this time,” the parish said on the home page of its website.

Condolences and promises of prayer began to flood into St. Peter’s Facebook page as word of the shootings became known. “You were remembered on prayer at Holy Eucharist at the Diocese of Vermont’s clergy conference,” Episcopal Church Executive Council member Lee Crawford said in one posting. “May you all find strength in the days to come.”

Brewington began working at St. Peter’s in 2008, according to a 2010 article in the parish’s newsletter. She split her time between the parish and its pre-school. She was married and had two sons in their 20s.

Kohn came to St. Peter’s in 2003 as assistant rector. She became co-rector with the Rev. Kirk Kubicek sometime around 2008, according to an undated document on the parish’s website. Apparently in budgetary move to allow both priests to stay, Kubicek took a half-time position as chaplain of St. Timothy’s School in Stevenson, Maryland. Kohn proposed that she begin a pastoral counseling practice part-time and said she had had an offer to teach pastoral counseling. The two proposed to the vestry that they share one compensation package.

St. Peter’s has been in Ellicott City for 150 years, according to its website, and is about a mile from the historic district of Ellicott City. Since 2005, Ellicott City has been ranked four times in the top 20 of Money Magazine’s Best Places to Live. It has a low crime rate and a median family income of more than $100,000.