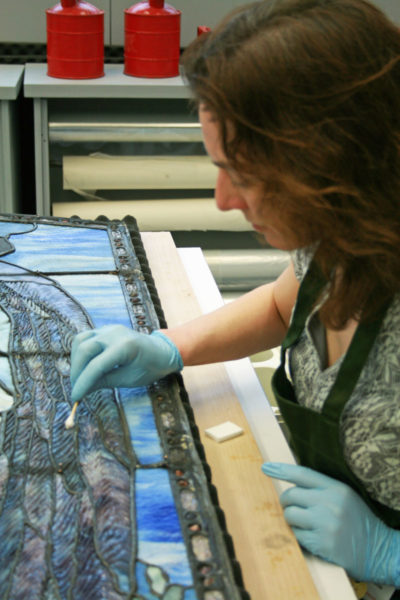 [Diocese of Southern Ohio] Four rare Tiffany stained glass windows have a new home: the Cincinnati Art Museum will unveil them this month as part of a new and permanent exhibit.

The windows, badly in need of repair and conservation, were removed in 2010 from the former St. Michaels & All Angels church in urban Cincinnati and sold to the art museum. Proceeds supported the founding of a community ministry that is now housed at the Avondale facility. Gabriel’s Place seeks to encourage community-based enterprise. The urban center operates a community garden and kitchen, as well as a hoop house that provides fish and fresh produce for local businesses and residents.

“Gabriel’s Place is a gem in the middle of Avondale,” said the Rev. Canon Anne Reed, canon for mission for the Diocese of Southern Ohio. “The ministry began with collaboration among 10 community partners, and that partnership is growing every week. The remaining stained glass windows in the former church building remind us of the sense of the sacred as Gabriel’s Place continues to grow as a center for physical, social and spiritual health.”

This has been “a fun and exciting project,” said Megan Emery, the museum’s associate conservator of objects. “Getting the windows from any religious setting would have been special, but it’s been exciting to see what’s happening in the church building with Gabriel’s Place. It’s really special for us to know that we’re tied into that mission.”

Coincidentally, along with Emery, who is a member of Christ Church Cathedral, Amy Dehan, the museum’s curator of decorative arts and design, and Gillian Thompson, a stained glass conservator contracted for the project, are Episcopalians as well. Thompson attends the cathedral, while Dehan is a member of St. Timothy’s, Anderson Township.

Commissioned around 1900, three of the windows honor the Mitchell family, parishioners and owners of a large furniture manufacturing business. One of the windows shows Christ, while the others depict angels. The purchase of the windows was made possible by the diocese and four donors: the Gardner Family 1992 Charitable Lead Trust, The Oliver Family Foundation, the Cincinnati Art Museum’s Docent Organization, and an anonymous donor.

The stained glass windows complement an existing collection at the art museum of Tiffany’s blown glass vases. About 30 early examples of Tiffany vases will join the stained glass exhibit, located on the second floor of the museum’s great hall.

“Tiffany’s work is so important to the history of glass,” said Dehan. Before Tiffany, most stained glass windows were flat sheets of transparent glass cut in shapes, then painted with designs or an illustration. Louis Comfort Tiffany, the son of the Tiffany & Co. founder, experimented with glass, employing different techniques to “paint pictures using only glass and light.”

Tiffany windows often have three or four different types of glass. For example, the folds of an angel’s robe may have drapery glass, which has been manipulated and folded when in a molten form to create folds and rolls. To create even more dimension for areas like the horizons, Tiffany windows may have up to five layers of different colors and textures of glass.

Conservation for the windows took 17 months of painstaking work, disassembling and cleaning hundreds of pieces of glass, making repairs and building new frames. Emery has documented each stage of the conservation work. While restoration tries to make things look as good as possible, conservation focuses both on the past – the original intent and context – as well as on the future and preservation.

Although thousands of windows were commissioned from Tiffany in the late 1800s and early 1900s, more than half have been lost and destroyed, Dehan said.

“We are always looking to acquire and hold for the community the best examples of art that we have,” said Dehan. “We were thrilled when this unfolded. It adds such a dimension to what we can tell about Tiffany. It also reflects upon Cincinnati and the city’s commitment to art.”

Dehan added that because the exhibit will be permanent, thousands of people will have the opportunity to experience and be inspired by the beautiful windows.

With light shining through the windows, she said, “they will appear in the same way Tiffany planned for them to look.”

— Richelle Thompson is director of communications for the Diocese of Southern Ohio.

While colored glass dates to ancient times, stained glass as a form of art and storytelling became prominent in the Middle Ages. A largely illiterate population could learn about the stories of the Bible from the illustrations in the stained glass windows. Some have called these windows the “Poor Man’s Bible,” because they, along with carvings, paintings and mosaics, could translate the narratives of the Bible to a population that couldn’t read.

A 12th-century German monk named Theophilus wrote about stained glass in medieval times in his text, “On Diverse Arts.” The basic ingredients for making glass, he explained, are sand and wood ash (potash). After the mixture is melted into a liquid, it cools into glass. While it’s still molten, color can be added or the glass can be blown or molded into different shapes.

In the late 1870s, Louis Comfort Tiffany studied new techniques for making stained glass windows. Early in his career, he used cheap jelly jars and bottles because he liked how the mineral impurities changed the shape, texture and color of the glass. When he couldn’t find the types of glass he wanted, Tiffany started his own glass factory. He used glass that was opalescent, meaning it changed colors as it transmitted light. Instead of painting on the glass, Tiffany simulated the folds of a robe or the texture of grass by molding and cutting glass in new ways.

Windows from Tiffany Studios adorn churches, museums and fine homes around the country. Several Episcopal churches in the Diocese of Southern Ohio have beautiful Tiffany windows.

Making
Stained glass windows start as a drawing or cartoon. After the design is approved, it is drawn to scale on paper and the design is traced onto a glass easel. Another copy of the drawing is cut into pieces and used as patterns to cut the glass. The pieces of glass are dabbed with hot wax and then posted onto the glass easel. This way the designer can see how the light looks through the glass. After all glass pieces are cut, the artist joins them using copper foil and channeled lead caning. Finally, the windows are framed and hung.

Conserving
Cleaning the glass requires care and time. Conservators use cotton swabs with an ethanol and deionized water compound to clean off the soot and grime. (Many of these windows were placed in churches and facilities that used coal and/or wood fires for heat). It can take two or more weeks to clean the top layer of one side of the window. Then the conservator flips it over and begins again.

After the exterior layers are clean, the conservator disassembles the window, carefully scraping out the old grout and opening up the metal caming to remove pieces of glass one by one. Broken glass is repaired, when possible, with a special epoxy injected through a syringe. As each layer of glass is removed, the cleaning continues.

After all the pieces are cleaned and repaired, rebuilding begins. All of the glass is placed back within its caming, and new solder¬ing is done when necessary. In this case, carpenters constructed new wooden frames for the window as well.

Visit the exhibit
The Tiffany stained glass windows and vases exhibit opens May 12 at the Cincinnati Art Museum. The museum is open Tuesdays through Sundays from 11 a.m. to 5 p.m. Admission is free (parking is $4). The museum is located at 953 Eden Park Drive, Cincinnati. Visit www.cincinnatiartmuseum.org