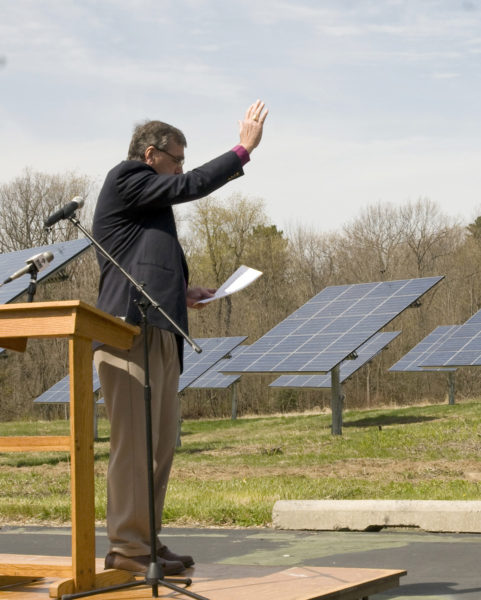 [Diocese of Vermont] As thirty-five solar panels turned into position behind him to face the morning sun, Bishop Thomas Ely, Bishop dedicated the new solar installation on the Diocese of Vermont’s property at Rock Point in Burlington, to the glory of God and “in thanksgiving for the goodness of all creation.”

Environmentalist Bill McKibben, Congressman Peter Welch, Burlington Mayor Miro Weinberger were among the featured speakers at the celebration and formal dedication on April 30.

A joint project of the diocese’s Rock Point Board of Governors and Rock Point School, the solar installation currently provides about 65 percent of the electricity that is used on the property on which the school and diocesan buildings are located. Planned efficiency measures will eventually increase that percentage.

A third partner in the project is AllEarth Renewables, which constructed the 35 AllSun Trackers. By owning the installation for the first five years, AllEarth was able to take advantage of federal incentives not available to not-for-profit institutions. The diocese and Rock Point School will buy the power from AllEarth and after five years will purchase the system at fair market value, estimated to be 30 percent of the original cost of the equipment.

Ely noted in his opening remarks that the project “stands as part of the promise of the Episcopal Church in Vermont and our affiliate Rock Point School to model for our churches and institutions a commitment to energy conservation, efficiency, and renewable energy projects. It offers a witness to others in our state and beyond of what is possible when we work together for a better tomorrow.”

Other speakers echoed Ely’s emphasis on the importance of the project as a witness and example. Vermont Governor Peter Shumlin, in a letter read by former Rock Point Board Chair Charlie Roth, spoke about Vermonters leading the way “to a sustainable and secure energy future,” and he said, “The Episcopal Diocese’s solar project joins others around our state in demonstrating a commitment to the environment and to energy cost savings.”

Vermont Congressman Peter Welch said, “People of faith do believe that spiritual values really matter” and added that such values need to be “anchored in a material world.” He said, “What has happened here with this work is that there has been an implementation of spiritual values in a material world. This project has created jobs. This project has reduced carbon emissions. It has created energy that we need for more jobs, and it has set an example that we hope will go viral and be duplicated all around this country. So I applaud the Diocese and the recognition of the unity between our spiritual aspirations and our material needs.”

Burlington Mayor Miro Weinberger noted that Burlington has not been in the forefront on renewable energy and said, “I hope to follow up on the challenge of the leadership you have shown and, as Congressman Welch said, attempt to build on this so that it has broader successes.”

Burlington Electric Department General Manager Barbara Grimes said she was not surprised to see the Episcopal Church leading in this way and noted an important aspect for the “summer peaking utility” is that the installation will be most productive at the time when demands are highest.

In addition to its witness to the wider community, the solar installation will serve as a valuable educational resource, both for the students at Rock Point School and for children of all ages from area schools who will be invited to visit and learn about solar energy. Rock Point Head of School C. J. Spirito told the crowd gathered for the celebration that collaboration is a vehicle for the school’s goals of offering “individualized opportunities for students to learn about themselves, to find their voice and to move forward in life in a meaningful way.”

Rock Point science teacher Kathy Rossman and three senior students also spoke briefly about how the solar installation is being integrated into their learning. It has, said Rossman, “revolutionized the curriculum.” She added, “When students are able to not simply experience but also able to live their education, they are much more apt not only to remember it but also to make associations to other parts of the world they did not know they had connections with.”

The day’s keynote speaker, environmentalist and 350.org founder Bill McKibben, said that when he looks at the solar panels, “I see the faces I’ve gotten to know around the world in my travels with 350.org,” people facing climate change problems that are not of their own making. “The problem of global warming is theoretical no more,” he said.

McKibben described the upcoming “Connect the Dots” worldwide action planned for the weekend of May 5-6, and said, “Vermont after [Hurricane] Irene understands in a very visceral and powerful way what happens when you change the planet. That type of sadness calls for action, one type of which you see here today.”

Noting that the planet has already passed the tipping point of 350 ppm of CO2 in the atmosphere (now at 393), he said, “It is our deep job now in very short order to keep things from getting worse. We can figure out how to do this if we set our minds to it.” Symbols are important, he said. “We have a beautiful new symbol that shows the commitment of this diocese to getting things done.”

Ely concluded the formal dedication with a benediction and invited those present to tour the installation and enjoy refreshments provided by both Rock Point School and Jerry Greenfield, co-founder of Ben & Jerry’s, who scooped ice cream.

— Anne Clarke Brown is communication minister for the Episcopal Diocese of Vermont.