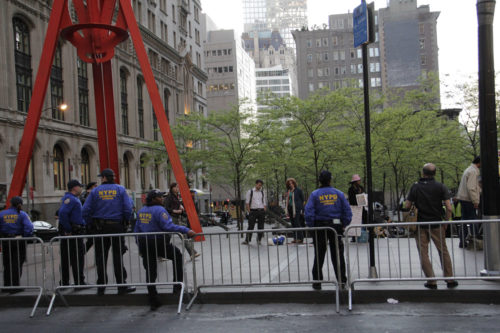 New York City police officers waited for Occupy Wall Street demonstrators to march the 2.6 miles south from Union Square to Zuccotti Park. As of 7 p.m. EDT, the demonstrators who were to have assembled around 5 p.m. had not arrived. ENS Photo/Lynette Wilson

[Episcopal News Service] The Rev. Mark Francisco Bozzuti-Jones, during “Occupy: A May Day Teach-In” webcast live from Trinity Wall Street, described the Occupy Wall Street movement as one he wished Trinity had had the “courage” and “insight” to birth.

“It’s so much of who we are … not just Trinity Wall Street, the whole spiritual enterprise,” said Bozzuti-Jones during the webcast.

Paraphrasing the Jesuit theologian Jon Sobrino, the real test is not so much about whether a person believes in God or not, but rather in idolatry, he said. For Sobrino, it came down to the human willingness to worship the wrong things.

“How do we teach the world that it is better to give than to receive?” asked Bozzuti-Jones.

Billed as part conference, part spiritual renewal, and part rally, the Occupy: A May Day Teach-In included brief talks by religious and secular thinkers who spoke about the moral, political and social justice and reconciliation issues that confront the Occupy movement.

May Day, or International Workers Day, is a celebration of labor and leftist movements with roots in the Chicago Haymarket Massacre of 1886, when after being targeted by a bomb police broke up a general strike by workers advocating for an eight-hour workday. It became an internationally recognized holiday in 1890.

On May 1, Occupy Wall Street called for a general strike – no work, no school, no shopping – to mark May Day and to inject new life into the movement that sparked nationwide protests against economic injustice in September 2011. Overnight, crowd barricades went up along Broadway in lower Manhattan and along Wall Street immediately in front of the New York Stock Exchange at the corner of Wall and Broad Streets, one block east of Trinity Church. May 1 Occupy events were planned for across the country.

On its website, Trinity describes Occupy as “… perhaps one of the most important movements since the Civil Rights and antiwar movements of the 50s and 60s.”

The Trinity teach-in, originally scheduled as a public event, was changed to a live webcast, when, according a statement on the Trinity calendar, the city of New York advised that there would likely be large crowds and disruptions in public transport in lower Manhattan Tuesday afternoon. Occupy supporters, including Episcopal clergy involved with the interfaith movement OccupyFaith NYC, were scheduled to march in “solidarity” from Union Square to Zuccotti Park beginning at 5:30 p.m. Eastern time.

Given Trinity’s location at the head of Broadway and Wall Street, two blocks south of Zuccotti Park, the privately owned park that housed the Occupy encampment for two months last fall, the church has been a part of the Occupy story since the beginning, at times opening its doors to Occupy protestors and supporters.

During his talk, Cooper acknowledged some of the tense moments along the way, which included hunger strikes and arrests. In the midst of all that, Trinity and Occupy supporters were able still to gather in conversation, Cooper said, whether it be an in informal, late night conversation on a park bench or during a Sunday morning worship service.

Following the Nov. 15, 2011, eviction of occupiers from the park, Trinity came under fire from Occupy supporters — including Episcopal clergy — for not turning over Trinity-owned property adjacent to Duarte Square, a city park at Canal, Grand and Avenue of the Americas. The dispute over access to the Trinity property, which Occupy wanted to use as a base from which to ride out the winter months, culminated in a hunger strike undertaken by three or four people associated with the movement and in the arrest of Episcopal clergy, including retired Bishop George E. Packard, when they jumped the fence during a Dec. 17, 2011, demonstration marking the movement’s three-month anniversary.

One of the hunger strikers, Bolivian-born Diego Ibañez — who recorded his own remarks on a digital recorder, he said, based on past issues of trust with Trinity — spoke about the beauty of being involved in something where “you can lose yourself to something greater than self.”

Referencing the high numbers of incarcerated people, especially people of color, he blamed previous generations for leaving the United States, in some ways, worse off than it ever has been before.

To him, he said, Occupy presented people with a way to engage in social change other than setting up a 401 C 3 organization that solicits tax-deductible donations from rich people. He criticized Trinity —  one of the largest landholders in Manhattan — for not offering Occupy a space when its Zuccotti Park encampment was disbanded, and for not allowing his companion to come into the teach-in even though, as he pointed out, there was plenty of space. (After the event became a live webcast, members of the public were barred from attending in person.)

At the close of his remarks, Ibañez, who has been sleeping on couches since being evicted from Zuccotti Park, challenged those present and those watching on the Internet to ask themselves what they are doing “to push the boundaries of the people around them.”

“All of us can be radicals,” he said.

In a talk about “Biblical economics,” recorded via Skype, the presiding bishop talked about how the “fundamental Christian ethic demands care for the poor.”

“The poor are neighbors with the fewest options — about what to eat, where to live, what kind of employment to seek, where or if they will send children to school, or find medical care. The ancient moral expectation is to provide basic dignity, support, and options for those with little ability to find their way in the world,” she said.

Joyce Carol Oates, who grew up in poverty in upstate New York, praised Occupy for its “vision” and “passion,” and talked about her personal experience: how receiving a $500 New York Regents scholarship helped her pay for college, and how when unionized the workers in the factory her father worked for gained some sense of security.

Despite the laudable vision and passion, however, the practical is a much bigger challenge for Occupy, Oates said.

She encouraged Occupy to reach out, without antagonism, to the people in the Midwest and the South who she said vote against their own best interests, as well as to others, to vote for politicians “sympathetic to the cause.”