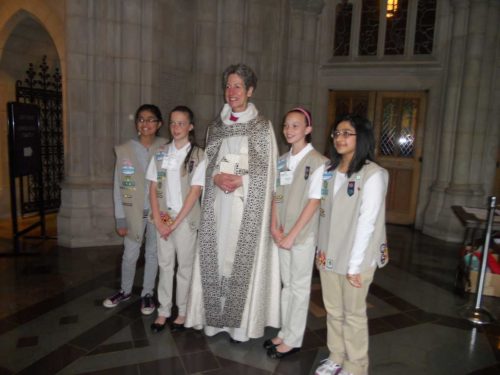 Before the opening sing-along began, with a rendition of “Make New Friends,” girls in green sashes and badge-embellished waistcoats scampered around the cathedral, taking photos of the stained glass windows with tiny phones. (Extra credit went to those who found, and photographed, the Girl Scout trefoil carved into a boss stone in the cathedral’s west entrance).

Welcoming the members, families and friends of the Girl Scouts Council of the Nation’s Capital, the Rev. Canon Mary Sulerud, the cathedral’s interim director of worship, recalled spending a hot July day at the Juliette Gordon Low house in Savannah, Georgia, “so that our daughter could earn her badge.”

Juliette Gordon Low, nicknamed “Daisy,” founded the Girl Scouts in 1912 on the principle that all girls should have the opportunity to develop physically, mentally and spiritually. One hundred years on, there are 3.2 million Girl Scouts in the United States.

Low was also a committed Episcopalian and lifelong member of Christ Church in Savannah, Georgia, where she was baptized, confirmed and married. After her death in 1927, hundreds of Girl Scouts attended her funeral there.

“The story is that Daisy Low sold her pearls so the Girls Scouts could have a secure start,” Sulerud said, referring to the Parable of the Pearl (Matthew 13: 45-46) in which a merchant sells everything he has to possess a pearl of great value.

“Welcome to you who are the pearls of great price,” she said. “God bless you all.”

In a touching tribute to Low, the opening procession of religious and Girl Scout leaders was led by pairs of girls bearing flags – and daisies. As the procession divided at the altar, the girls placed the daisies in two vases before a white wreath.

Theresa Tancre, of the All Dulles Area Muslim Society, recited a surah from the Quran in Arabic, and Imam Mohammed Magid, the society’s executive director, offered a prayer.

Prayers also were offered by the Rev. Frank Ready of the Roman Catholic Diocese of Arlington, Virginia, the Rev. Kaz Nakata and Erick Ishii of the Ekoji Buddhist Temple (who scattered paper petals as a sign of welcome), D.C. Rao of the Interfaith Conference of Metropolitan Washington, Rabbi Rachel Gartner, director of Jewish Chaplaincy at Georgetown University and the Rev. Nancy Lee, of Community of Hope ANC Church.

On pink crutches, Glenda Longus, a Girl Scout senior from West Virginia, made her way to the pulpit, where she led the congregation in a recitation of the Girl Scout Law.

Then Lindsey Rubin, a Girl Scout senior from Virginia, spoke of the intersection of the teachings of her Jewish faith and the Girl Scout code.

“I have found much of my inner strength through faith and girl scouting, and every day they inspire me to strive for change in ways big and small,” she said.

Abrar Omeish, Girl Scout ambassador and board member from Virginia, recited the Quran’s Surah 49:13, which calls on the world’s nations and tribes to know each other, not despise each other.

Omeish said the Girl Scout code “agreed with my religious mandates and enacted the theme of the verse I read.”

Rubin and Omeish each spoke of the importance of the Girl Scouts’ message of sisterhood, and Omeish pointed to the opportunities for dialogue the organization fostered, recalling one camp where “the girls spent a whole night in their cabin discussing each other’s religion rather than sleeping.”

The Girl Scouts “have created the perfect area of commonality,” she said. “We all have the honor to worship together today and recognize our similarities.”

After Emily Quinn, a Girl Scout ambassador from Virginia, read the story of the Widow’s Mite (Luke 21:1-4), Jefferts Schori got up to preach.

“I first went to Girl Scout Camp when I was 7 years old,” Jefferts Schori said, noting that among the lessons learned there – identifying birds, learning to plant trees, tie knots or build a fire – the most important was how to live in community “and those gifts of character, like dignity and respect.”

Describing a group of students who recently raised $80,000 to help a classmate with a brain tumor – baking cookies, inviting people to sponsor them jumping rope and simply reaching out to ask –Jefferts Schori compared them to the widow in the Gospel of Luke, who was willing to share everything she had.

“She puts in her two cents, and it makes a world of difference,” she said. “That’s a big part of what it means to be a Girl Scout.”

The foundation for a worthy, meaningful life, she said, is to “use what you have been given – who you are, and the gifts and skills you’re developing – to make a difference. That is how we serve God and our neighbors – by loving them.

“Do that, and I expect that Girl Scouts will still be helping girls grow into mature and confident women, sharing and serving the world around us a hundred years from now.”