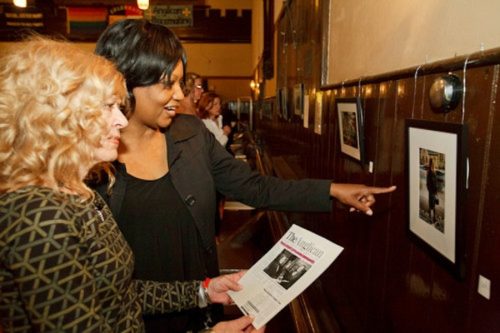 Photographs, taken by sex trade workers, are sold by silent auction at The Exposure Project fundraising event at The Church of the Holy Trinity, Trinity Square on April 19 in Toronto, Canada. The Project is the creation of Carly Kalish, a social worker at All Saints Sherbourne Community Centre. Photo/Michael Hudson

[The Anglican Journal] A photography project to empower women who work in the sex trade has raised about $38,000 for the drop-in program at All Saints Church–Community Center in downtown Toronto, where the project began.

Carly Kalish, a full-time social worker hired by the church, dreamed up the idea of giving 10 women disposable cameras and photography lessons as a way to tell their stories. The result was The Exposure Project, an exhibition of 33 images at Holy Trinity Church in downtown Toronto. The exhibition ended in a fundraiser on April 19 which attracted a sold-out crowd of 250 people. Most of the photos, which were professionally framed, sold for $75 to $200 each; gala ticket sales and donations further boosted the bottom line.

While the photographers did not attend the gala themselves, they did bring partners and friends to a private viewing beforehand. “It was just breathtaking to see them see their own work,” says Kalish. “They were so proud of themselves.”

Importantly, the experience helped the women feel more comfortable about coming to All Saints for support — with housing, with experiencing violence or just to talk. “To me, that’s the success of the project,” says Kalish. All Saints will do the project again next year, she adds. In addition, a 2013 calendar with The Exposure Project photos is under consideration.

Now Kalish is dreaming of a fashion show, working with women from the drop-in center as well as local designers. A proponent of art therapy, Kalish envisions a sewing group at the drop-in center that will begin by making fashion accessories such as jewelry and headbands.

— Leigh Anne Williams is a staff writer for The Anglican Journal,  publication of the Anglican Church of Canada.