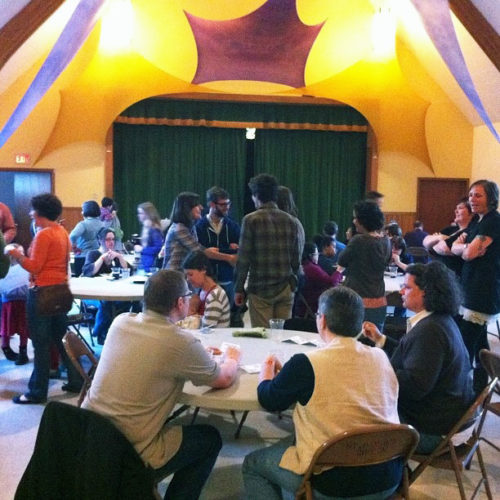 [Episcopal News Service] The ages-old tradition of beer and religion has come to Portland.

About 75 people gathered in the parish hall at St. David of Wales Episcopal Church for “straight-up Christian hymns, beer and bratwurst and — this being Portland — gluten-free beer and veggie sausages,” said the Rev. Karen Ward, who organized the April 20 Pop Up Church‘s “Beer n’Hymns.”

Intending to offer “something for every lifestyle” at the event, Ward provided all kinds of beers, lagers, and ales, even homemade brew — up to and including ginger ale and root beer for the children as well as nonalcoholic beer and water. Tambourines and other musical instruments were strategically placed throughout the parish hall so a dozen or so children could accompany an alternative Christian rock band, she said.

“The music was great,” said Katy Breazeal, 53, who lives in Portland and attended the event. “You could sing along and not feel stupid if you were a little bit off” on such standards as “Great is thy Faithfulness,” “Come Thou Font of Every Blessing,” “Be Thou My Vision” and even some original music, she said.

Matt Addis, 29, donated his homemade gluten-free imperial pale ale for consumption and “had a great time” at the event.

“One of the best things about it was that there were a lot of different denominations represented, all age groups — it was a diverse crowd. Just to be able to eat and drink together and meet new people and find out that there are people doing really cool things in your city and to be able to sing with them was exciting,” said Addis during an April 23 telephone interview from Portland.

“A few people shared with me that it felt like doing something new, that it was open enough and compassionate enough that people really felt welcome and didn’t feel forced by it in the way they might with some liturgies,” added Addis, a senior at the George Fox Seminary in Portland. He aims to help create the Habitat Brewing Company after he graduates this December. He is also a co-founder of Community Missions, which hosts bimonthly “pint theology” and other interfaith and interdenominational gatherings throughout Portland.

There was an informal liturgy and prayers, Ward said. “It’s an alternative liturgy, a holy meal and a holy communion but not in the literal sense of the church’s official rituals,” she said. The event also aimed to raise money and awareness for two local faith-based agencies; the HIV Day Center, which assists persons living with HIV/AIDS, and Rahab’s Sisters, which offers support to women marginalized by the sex industry, homelessness and substance abuse.

Ward was inspired by a beer n’hymnsing at the Greenbelt Festival, a yearly arts, faith and justice gathering in the United Kingdom. This year’s gathering is planned for Aug. 24 – 27 in Cheltenham. Its American counterpart, the Wild Goose Festival, is set to hold its second justice, spirituality, music and art gathering June 21 – 24in Shakori Hills, North Carolina and a similar festival is being planned for the Pacific Northwest, Ward said.

But the tradition of beer and spirituality and religion dates to the Middle Ages, she added.

“Benedictine monks have been brewing beer in Europe since the 12th century. Monastics brewed beer especially during Lent; if the monks were on a fast, it had all the nutrients of bread,” Ward said during a recent telephone interview from Portland.

She hopes to adapt the hospitality associated with monasteries to fit Portland’s culture, to tap into the lives of people who may not go to church but “might like singing, might like beer drinking, to introduce seekers to church in a way they’ve never been.

“In our culture, people think of coffeehouses and pubs as those spaces churches used to fill. That’s where people go to find community,” she said. “They don’t go to church, so what is that saying? And churches have gotten away from being part of the regular culture. I think Jesus wouldn’t be hiding behind the walls of a church and expecting people to come in, instead of being out where the people are.”

Lindsay Ross Hunt is program director of the HIV Day Center in Portland, a 23-year-old faith-based drop-in center that offers meals, laundry, showers, social workers and other assistance to people living with HIV/AIDS. Many are struggling with mental illness, homelessness, racial and ethnic minority status and other complicating issues, she said during an April 23 telephone interview from her office.

She was surprised — pleasantly — at the new faces she saw at Beer n’Hymns.

“Oftentimes, you see some of the same people at community events, but this was a unique gathering of individuals that might not bump into each other otherwise,” said Hunt, 33.

“People had a great time,” Hunt added. “We shared a meal together before diving into the hymnsing, which was also really different and unique. It was a hopeful space, a very traditional practice of singing hymns together in a different kind of way, especially with children participating in the production of music itself. There were instruments all over the room, and a piano, which people could grab and participate.”

“It was a time of prayer, a very safe place for anyone who hasn’t been to a church before. People were dancing, kids were running around with tambourines and shakers and everyone could play with the band.”

But, he added, “it was a worship service and it didn’t shy away from the fact that we were there to sing hymns and have prayers, but at the same time it was a safe space.”

Beer n’Hymns is evangelism, he said, particularly among “disaffected evangelicals, people who have grown up with faith as a formative part of their lives but feel the community they grew up in is too closed off and fundamentalist.

“Beer n’Hymns meets in the middle of evangelical worship and traditional Episcopal worship. There was a discernible liturgy but minus the pomp and circumstance, which can be daunting for people who aren’t familiar with it,” Morrow said.

Daniel Palmer, 43, an e-commerce businessman, describes himself as “a recovering evangelical” who was seeking alternative worship when he heard about the Church of the Apostles, an emergent church Ward started in Seattle in 2002.

Then he learned about Ward’s Pop Up Church — emergent worship that meets at various locations around Portland.

“I like what Karen’s doing,” he said of Ward. “I’m excited about how she’s so inclusive of everyone and really reaching out to lots of different people. I love singing, so Beer n’Hymns sounded perfect. We were standing the whole time during the singing portion and my ten-year-old daughter, Sienna, was playing the tambourine.”

For Breazeal, 53, Beer n’Hymns was filled with a lively bunch of people “that maybe don’t fit into the mainstream of Christian churches” and perfect for someone like her, without a particular faith tradition. “I don’t know what I am,” she said laughingly about her faith journey. “I have always looked for ways to connect with people over spiritual issues but hadn’t found a church or anything.”

She frequently attends Pop Up Church on Sundays, a more contemplative experience which she treasures. Yet, she also enjoyed the vibrant energy of Beer n’Hymns, she said. “It wasn’t any holier-than-thou kind of experience – it was quite sweet and Karen is very open and accepting and actually sort of shy but puts herself out there just because it’s her calling. She’s shaking things up and making things happen.”