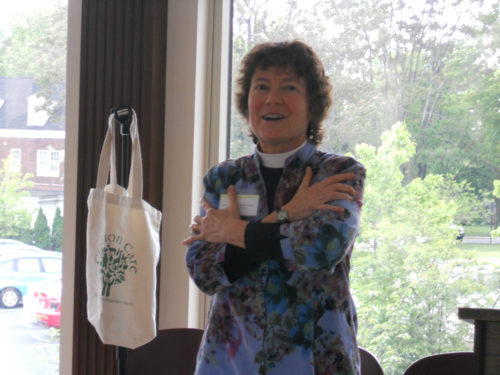 Climate activist and Episcopal priest the Rev. Margaret Bullitt-Jonas addresses an April 23 conference on the Scientific, Religious and Cultural Implications of Global Warming in Washington, D.C.

The conference, which brought together religious, scientific, medical and military leaders to alert citizens across the nation to the seriousness of climate change, was hosted by the Greek Orthodox Cathedral of St. Sophia and sponsored by the National Religious Coalition on Creation Care, Interfaith Moral Action on Climate and the Presbyterian Synod of Southern California and Hawai’i.

On the religious track, Bullitt-Jonas and other Episcopalians joined representatives from the Roman Catholic, United Methodist, Baptist, Presbyterian, Evangelical, Russian Orthodox (Christian) and Jewish traditions to describe how they were caring for the environment and to share wisdom from their leaders, past and present.

Patrick Carolan of the Franciscan Action Network spoke of how two saints revered by Catholics, St. Francis of Assisi and St. Boniface, modeled a love of nature. Francis believed the created world was a “window into the divine,” while Boniface wrote, “All of God’s creation is the word of God.”

The Rev. Peter Moore Kochlacs and Jaydee Hanson of the United Methodist Church referenced John Wesley’s well-known “Sermon on the Use of Money” (1760), and described its specific — but often overlooked — mandate to avoid industries that produce lead and arsenic, environmental pollutants.

Hanson also warned faith leaders of the danger of what he called “words righteousness” — a condition in which religious institutions think that “if you’ve passed the resolution, then you’ve done the deeds.”

Bullitt-Jonas, who currently serves as priest associate at Grace Episcopal Church, Amherst, Massachusetts, said she preached her first sermon on the environment after the 1989 Exxon Valdez oil spill in Alaska’s Prince William Sound.

Sitting down afterward, she said, she thought rather smugly that she had done a pretty good job of it, until a baffled parishioner came up to her and asked her what religion had to do with ecology.

“One sermon, no matter how impassioned, is not going to get the job done,” she said.

Deciding she wanted to help her Christian colleagues make the connection, Bullitt-Jonas has been active in the environmental movement ever since. She currently serves on the interfaith leadership council of Religious Witness for the Earth and on the steering committee of the Genesis Covenant, an interfaith initiative that helps congregations reduce the carbon footprint of their facilities, and has helped craft key pastoral letters for the Episcopal Church, notably 2009’s “A Call to Action from the House of Bishops of Province VIII.” She also has been a lead contributor to the Interfaith Call for 350.org.

Significant actions taken by the Episcopal Church include a September 2011 Pastoral Teaching from the House of Bishops which calls for repentance, quoting Jeremiah 12:4: “How long will the land mourn, and the grass of every field wither? For the wickedness of those who live in it the animals and the birds are swept away, and because people said, ‘He is blind to our ways.'”

Presenting the Jewish voice, Mirelle Goldsmith of the Coalition on the Environment and Jewish Life sang a prayer traditionally offered on Yom Kippur, the Day of Atonement:

“Personally, I cannot think of this prayer without thinking of climate change,” she said. “Who will suffer from the actions we take in this world? As this prayer says, what we can do is avert the severity of some of these things.”

The idea of repentance is very important in Judaism, she said, but “the gates of mercy are open. We need to walk through them in order to secure our future.”

Breaking into a hymn, “This Is My Father’s World,” before describing the greening efforts of his congregation, Solana Beach Presbyterian Church, the Rev. Dr. Tom Theriault quoted John Calvin, the founder of the Presbyterian movement.

In his “Commentary on Genesis 2:15,” Calvin wrote: “The custody of the garden was given in charge to Adam, to show that we possess the things which God has committed to our hands, on the condition that being content with the frugal and moderate use of them, we should take what shall remain.”

“We Presbyterians are just waking up to this tradition, this heritage we’ve carried for years,” Theriault said. “Like John Calvin says, we’ve got to leave the garden in good shape for posterity.”

While St. Francis of Assisi preached to the birds, he added, “Martin Luther, who is the father of us Protestants, said the birds are excellent little preachers – he listened to them.”

Denial presents a serious challenge to faith, Carr said, because it grows out of fear, and fear is the opposite of love. “And for those of us that are Christians here, the heart of Christianity is love,” he said.

“We have left the prophetic voice to the scientists,” he said. “Think about that. Why have we done that?”

Describing climate change as the great moral challenge of our generation, Hescox linked it to the immigration issue in this country as farmers in Mexico are forced to move north because of devastating droughts caused by climate change.

Finally, Michael Oleksa, a Russian Orthodox priest from the Saint Herman Theological Seminary of Alaska described, in a series of engaging Native American stories about animals, hunting and the earth, how the core principals of Native American spirituality can be summarized as “gratitude and respect.”

“It’s a core belief in Alaskan and Native American culture that we survive because animals consistently die for us,” he said. “You can see where Christianity came in. … This pattern is in God. It’s always a gift, it’s always a blessing. That way the proper attitude as human beings is gratitude and respect.”