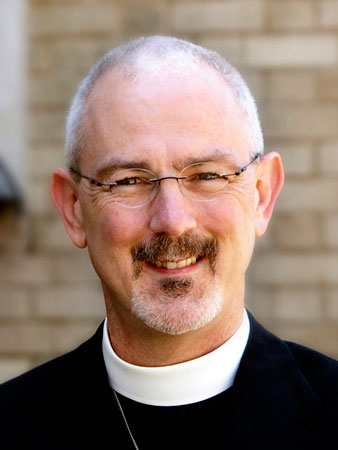 The Very Rev. Jacob W. Owensby was elected April 21 as fourth bishop of the Episcopal Diocese of Western Louisiana.

Owensby, 54, dean of St. Mark’s Cathedral in Shreveport, Louisiana, was elected on the sixth ballot from a field of three candidates. One other nominee withdrew after the second ballot, two others withdrew after the third, and a fourth after the fifth. Owensby received 78 votes of 143 cast in the lay order and 30 of 58 cast in the clergy order.

The election was held at a special convention at St. James’ Church in Alexandria. Delegates participated in a service of holy Eucharist before balloting began.

Owensby will succeed the Rt. Rev. D. Bruce MacPherson, who will retire in July after 10 years as bishop of the diocese.

Shortly after his election, Dean Owensby said: “I am humbled to be called to be the fourth Bishop of Western Louisiana and filled with affection for the good people who make this part of our state their geographical and spiritual home.  Joy, excitement, and anticipation have me a little tongue-tied right now.  But I can say that my first and most important job is to love the people of this Diocese and to help them grow in their witness to the extravagant love of God in Jesus Christ.  I am especially looking forward to building deep relationships with my fellow clergy, visiting with our congregations and helping them to grow in vitality, and serving our Lord together with these wonderful people.”

Owensby has been dean of St. Mark’s Cathedral, the seat of the Western Louisiana diocese, since January 2009. He previously served as rector of Emmanuel Church, Webster Groves, Missouri; as rector of St. Stephen’s Church, Huntsville, Alabama; and as assistant rector at St. Mark’s Episcopal Church, in Jacksonville, Florida. He holds bachelor’s, master’s and doctoral degrees in philosophy from Emory University, and a master of divinity degree from School of Theology at the University of the South. He was ordained to the priesthood in 1997.

Because the election took place within 120 days of a meeting of General Convention, the House of Deputies and a majority of bishops with jurisdiction must consent to the election during their meeting in Indianapolis in July 2012.

Pending necessary consents, the consecration is due to take place at 10 a.m. on July 21 at St. Mark’s Cathedral.

The Diocese of Western Louisiana is composed of 50 churches and chapels in an area of the state stretching from the Arkansas border in the north to the Gulf of Mexico in the south.