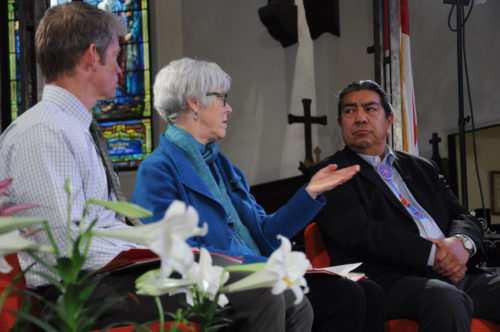 [Episcopal News Service – Salt Lake City, Utah] Participants in the Episcopal Church’s “The Intersection of Poverty and the Environment” program April 21 agreed that people of faith can and should play an important role in organizing communities to be both good neighbors and stewards of creation.

“In the Abrahamic religious traditions, poverty confronts the divine dream of plenty — of a heavenly banquet in a land of peace with justice,” Presiding Bishop Katharine Jefferts Schori said in her keynote address.

“Antibodies to poverty begin to form when members of the community discover that their common humanity and dignity depend on one another,” she said, urging people to begin by “choosing to notice and do something about the poverty in our midst.”

The two-hour program was webcast live from the Diocese of Utah‘s Cathedral of St Mark in Salt Lake City. Statistics showed that 700 computers received the webcast; at least 50 of those computers were being used by groups to view the webcast. The session will soon be available on demand and there will be a facilitator’s guide and resources to optimize viewing and participation here. The text of Jefferts Schori’s address will be released when the on-demand version of the webcast is available. 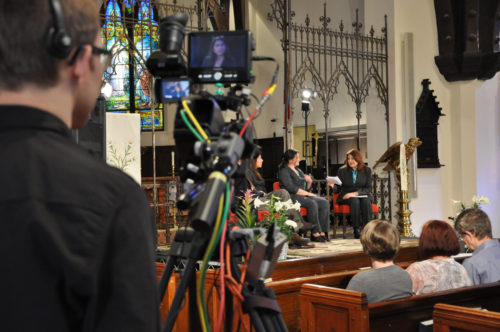 Kim Lawton of PBS's Religion & Ethics NewsWeekly, right, asks a question during the Episcopal Church's April 21 program "The Intersection of Poverty and the Environment." The two-hour event was webcast live from the Episcopal Cathedral of St. Mark in Salt Lake City, Utah. Photo by Mary Frances Schjonberg

During the first discussion on the question of whether sustainability initiatives can lift people out of poverty, Bonnie Anderson, president of the House of Deputies, reminded listeners that people of faith have the unity of purpose that is fundamental to community organizing. “We have the unity of the rule to love our neighbor as ourselves,” she said. “The problem is that we don’t know our neighbors very well.”

Forrest Cuch, chief executive officer of Ute Tribal Enterprises, told participants that “the thing that troubles us the most is that all of this [environmental] degradation has really caused a lot of harm to our people to the point where there’s hopelessness.” He called that hopelessness “our single-most threatening issue” and said that tribal leaders are trying to help their people reconnect to traditional beliefs

“We’re reminding them of who they once were,” he said. “My people came from beautiful parts of this country … we were very happy people, very healthy people and we were a self-sustaining people” who were “deeply connect to the earth.”

George Handley, a professor of humanities at Brigham Young University, said during the same discussion that religion has historically been an obstacle to environmental stewardship but “every faith tradition has sacred principals that if lived to and adhered to will be a great benefit to the earth.” He suggested that individual and collective adherence to those principals as well as work across ecumenical and interfaith boundaries such as the April 21 forum “unleashes a tremendous amount of spiritual energy.”

Handley had earlier said he has encountered a “weird theological obstacle” that prevents people from looking at such issues as alternative energy sources. Some people have told him that they would be appear to be ungrateful to God if they did not use the God-given gifts of oil and gas to their benefit.

“I would simply like to point out to people that the sun itself is God-given, the wind, geothermal energy – these are extraordinary sources of energy that are also in the same category of gifts of the creation,” he said. “I don’t think any theology is responsible if it doesn’t remember our own accountability for being creative and making adjustment when we realize that what we’ve been doing is actually not working anymore.”

During the second panel on the issue of reducing environmental health consequences for those in poverty, Dr. Gerry Hardison, chief medical officer at Maseno Mission Hospital, Kenya, and an Episcopal Church missionary, urged participants to take the long view of environmental advocacy. He said the question is whether “we going invest in the world after our deaths or are we not.”

“It’s an investment that means sacrifice; the dividends are huge but you are never going to see them personally,” he said to applause.

The Rev. Michael Livingston, director of the National Council of Churches’ Poverty Initiative, said that people of faith “are confronted with this stark demand that we act with great responsibility towards God’s creation.”

Cecelia Calvo, coordinator of the U.S. Conference of Catholic Bishops environmental justice project agreed, saying “this isn’t radical; this isn’t new for us. Caring for God’s creation began with Genesis.

“For us as people of faith this is an essential part of who we are. It’s kind of simple,” she said. It’s not something new; it’s not a fad.”