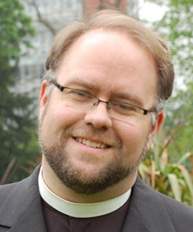 [Episcopal News Service] In my position at Bexley Hall, I teach theology, ethics and liturgics. I also teach a class on The New Urbanism and urban design. When I talk with people about what I do, it is that last area that elicits the most quizzical looks; occasionally someone will be bold enough to ask what it has to do with the church.

The New Urbanism is a movement in urban planning which emphasizes developing and rehabilitating walkable, human-scaled neighborhoods. Some of the principles that its proponents value include mixed-use zoning (so homes, shops and schools can all be close to each other, rather than requiring a car); greater public transportation where practicable; more and better shared spaces in parks, plazas, sidewalks and the like; neighborhoods designed so that people of various ages, physical abilities and financial resources might live in and enjoy them; and working to develop cities and suburbs that are greener, more livable and sustainable. It might seem appealing, but the church’s role might not be obvious.

As I said, it’s a good question – sometimes I even find myself wondering. And then I remember Raquel Nelson.

April 10, 2010, Ms. Nelson, a 30-year old mom of three, was walking home with her children after getting off the bus. They had been shopping earlier and ate pizza to celebrate 4-year-old A.J.’s birthday, which was the next day. At Wal-Mart, Ms. Nelson bought her son a goldfish as a present. But on their way back, they missed their bus and had to wait for the next one. They were an hour late coming home, and it was getting dark.

Night had fallen by the time the Cobb County Bus dropped the family off directly across from their home in the Somerpoint Apartments. The bus stop is in the middle of the block, and four lanes of highway and a concrete median strip with a turning lane separated them from home. In order to use the cross walk, the tired family needed to walk three-tenths of a mile in one direction to get to the intersection, and three-tenths of a mile back to their apartment. In other words, they would have had to walk more than half a mile to get to their home, which they could see from the bus stop.

Along with most of the other bus riders dropped off at the time, they made the fateful decision to cross in the middle of the street. They crossed the first two lanes and waited in the median. One girl ran out into the street, and A.J. ran out after her. The boy was hit by a passing van, which left the scene of the accident; he died of his injuries later at the hospital.

The driver was found and arrested. He admitted hitting the child, as well as drinking alcohol earlier that day and using prescription pain killers. The court sentenced him to six months in prison, and he was released the following October. Ms. Nelson was convicted of reckless conduct, improperly crossing a roadway, and second-degree vehicular homicide. She faced up to 36 months in prison.

No, that is not a misprint.

Raquel Nelson lost her four-year-old son in a traffic accident and was set to be sent to prison for what was, in effect, the crime of being a pedestrian. The court, in the event, gave her probation.

There are issues of justice involved here, but this is primarily an issue of design: we have designed our cities and towns around cars and not around people. We have made it dangerous to be pedestrians like Raquel Nelson and her children, and this danger holds for all those who physically cannot drive, those who cannot afford to drive, and those who don’t care to drive. Since our decision to become a car-based culture following World War II, we have consistently changed our built environment to cater to cars, particularly to enable them to go faster, with wider lanes, faster speed limits, and fewer stops. In rural areas this is eminently appropriate, but we have done so in densely populated areas as well. As speeds rise, fatality rates skyrocket: 5% of pedestrians hit by a car going 20 mph die; at 40 mph, the fatality rate jumps to 83%.

We need leaders who are aware of and can advocate for policies that foster walkable, sustainable neighborhoods, and who can teach this way of thinking to others. That’s what it has to do with the church.

The New Urbanism is not everything: it is not the Kingdom of God come in its fullness. But issues of humane urban design, including pedestrian safety, public transit, walkability, livability, sustainability, even attractive and charming places to live and visit, ought to be the concern of all those who take seriously Jesus’ commands to love our neighbor, the stranger, and even our enemy. This is one more way that the church can learn to see, love and serve well the place to which God calls us.