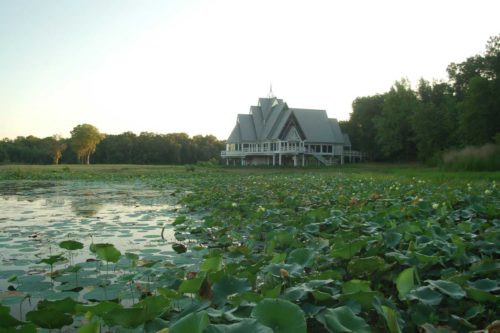 Mandi’s Chapel has been as been recognized by the Florida Chapter of the American Institute of Architects.

[Diocese of Florida] Mandi’s Chapel, the cherished centerpiece of the Episcopal Diocese of Florida’s Camp Weed & Cerveny Conference Center, has been recognized by the Florida Chapter of The American Institute of Architects, AIA Florida.

Given in memory of Mandi Petway by her parents, Betty and Tom Petway, Mandi’s Chapel has been named the top religious building, and ranked second overall building, in the AIA Florida “Florida Architecture: 100 Years. 100 Places” competition. Betty and Tom Petway were thrilled with this news, stating, “We appreciate this special honor and well deserved recognition for Mandi’s Chapel, John Zona, AIA, and The Camp Weed and Cerveny Conference Center. Mandi’s legacy continues to shine through this special tribute.”

Mandi’s Chapel serves as a visual and spiritual cornerstone of the diocesan gathering space. Members of the diocese claim the space as transforming in their spiritual development.

“Mandi’s Chapel is at the spiritual heart of the Diocese of Florida, providing, as it does, a place of worship, beauty, and tranquility in the midst of our beloved Camp Weed and Cerveny Conference Center,” said Diocesan Bishop Samuel Johnson Howard. “This AIA tribute is an acknowledgement of the enormous gifts of architect John Zona and of the generosity of Mandi’s parents and family, which have come together in this special place to the glory of God.”

Zona designed the glass-walled chapel to be a public, yet sacred place, which appears to float between lake and sky. Another Zona design, The Baughman Center at the University of Florida, finished number three overall in the competition, in which more than 2.4 million votes were cast. The public was encouraged to vote online to choose among 100 Florida structures identified by AIA Florida as the best in architectural achievement.

St. Paul’s by-the-Sea Episcopal Church, in Jacksonville Beach, a landmark sweeping ocean-wave design which replaced a smaller Diocese of Florida worship space, was second among the five top buildings as voted by architects. That congregation’s historic original building has been preserved as part of the Beaches Museum and History Center.