[Anglican Taonga] A Transitional Cathedral for Christchurch, New Zealand – designed by Japanese architect Shigeru Ban – will be built in Latimer Square on the site of St John’s Church. 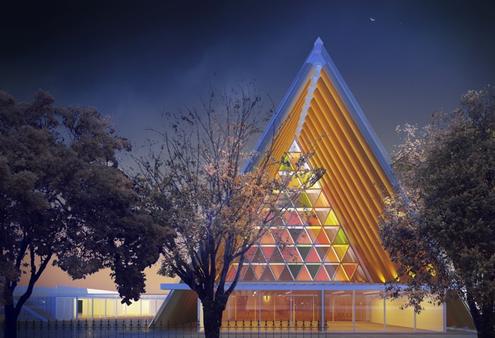 An architect's impression of what Christchurch's Transitional Christchurch will look like. Photo/Anglican Taonga

The NZ$4.5 million (US$3.68 million) cardboard structure, to be completed by Christmas, will be used for worship and community events until a new permanent cathedral is built. It will then become the worship center for St John’s Parish.

This “symbol of hope” was announced by Richard Gray, representing the Transitional Cathedral Group, and Christchurch Bishop Victoria Matthews.

With 400 parishioners, St John’s is one of the larger parishes in the diocese and now worships at Mairehau High School and St Saviour’s, Sydenham.

The old stone church, vicarage and hall on the corner of Hereford and Madras streets had to be demolished after the Feb. 22, 2011 earthquake. It was announced in early March that the quake-crippled ChristChurch Cathedral will be brought down to a “safe level” – between 2 and 3 meters high.

In a media briefing at the Latimer Square site, Gray said: “This is a very exciting next step for the project. The Transitional Cathedral is a symbol of hope for the future of this city as well as being sustainable and affordable.

“The cathedral is confident it will attract interest nationally and internationally drawing additional visitors to the city.”

Matthews said: “I am delighted we have reached this step and I acknowledge the wonderful collaboration between the congregations of the cathedral and St John’s that has made a Transitional Cathedral possible in the inner city.”

With seating for 700, the building also will provide a venue for concerts, exhibitions, civic and community events.

Linked containers will sit alongside the Cathedral and include a café and shop, meeting rooms, amenities and offices.

“The bulk of the money is in hand but there will be further fundraising to meet the costs of building the temporary structure,” Gray said.

The Transitional Cathedral will be made of cardboard tubes, timber beams, structural steel and a concrete pad, and is intended to last well over 20 years.

It is the largest “emergency structure” designed by Shigeru Ban.

He and associate architect Yoshie Narimatsu are not charging for their services.

Warren and Mahoney will soon begin work on detailed drawings, and the building should be completed by this December. There are hopes that the opening could coincide with a visit of outgoing Archbishop of Canterbury Rowan Williams.

Shigeru Ban hopes to be in Christchurch this weekend for the first turning of the soil on the site.