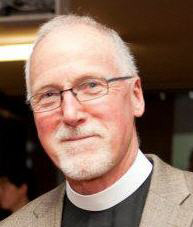 [Episcopal News Service] You wouldn’t know it by talking to Wells Fargo, but the Easter season has arrived. The austere days of Lenten fasting, of skipping things like chocolate or tequila, or doing the hard work to mend broken relationships — these have given way to Easter egg hunts for our kids, daffodils on the kitchen table, and laughter at each others jokes. (Yes, in some Christian traditions, people actually gather in church during Easter just to swap their favorite jokes.) It’s an amazing and joyful season. And one that Wells Fargo is, sadly, clueless about.

We told Mr. Campbell some of the all-too-familiar stories of families losing their homes, barely surviving under crushing debt, because Wells refused to reset the principal on their underwater mortgages to present market rates. We pointed out to him that anyone who has paid more than zero in income taxes has paid more than Wells Fargo and suggested that maybe it’s time for them to pay their fair share. We told him to discontinue Wells Fargo’s shameful payday loan product that lures in the most vulnerable people and then slaps them with 120% interest. We told him to stop funding politicians who want to deprive people of color of their right to vote, and to stop distorting our political processes with their army of lobbyists. (In 2011, Wells Fargo spent $7.82 million on lobbyists, and since 2008, it has paid these guys more than $18.4 million. These hired guns are now at work fighting things like the Homeowner Bill of Rights now before the California State Legislature.) Our suggestions to Mr. Campbell came out of the bitter tears of the people in our congregations and neighborhoods.

Perhaps most movingly, two young Latinos told Mr. Campbell of being pulled over by police for minor traffic violations, then being hauled off to one of the Wells Fargo-funded detention centers where undocumented immigrants are held, sometimes interminably, for deportation. There, cut off from their families, they were publicly strip searched, forced to eat from garbage bins, denied medical treatment, and, when they complained, thrown into solitary. We suggested that Wells stop investing in such cruel institutions.

John Campbell said no to every one of our suggestions. And here we see Wells Fargo’s idea of Lent. As far as they’re concerned, you can put the chocolates and the tequila back on the top shelf.

Unlike the real Lent that awakens and enlivens us, culminating in the joy and laughter of Easter, this Wells Fargo pseudo-version has brought only heartache and financial ruin to many hard-working Americans, torn apart many immigrant families, kept at risk our still-fragile economy, and left many of us living as indentured servants. It has diminished the spirits of far too many of our people.

Just a few weeks before the Des Moines meeting, on Ash Wednesday, 45 San Francisco clergy had sprinkled ashes in front of the Wells Fargo corporate headquarters. It was our way of inviting them to repent and begin repairing some of the damage they caused. This was simply Ethics 101 at work. Since we ourselves were entering the season of repentance, we thought we’d invite them along.

We never heard back. Guess they decided not to join us. Then in Des Moines, Mr. Campbell confirmed our worst suspicions by cavalierly dismissing every constructive idea we put before him.

Judging from Mr. Campbell’s words, Wells Fargo never got the email about Easter and how it’s time for them to stop imposing their harsh pseudo-Lent on the rest of us.

On April 24, Wells Fargo’s shareholders will hold their annual meeting here in San Francisco, and I, with my newly acquired share, will be there along with many clergy from around the country. By then, the Easter season will be in full swing, and our town will be awash in cherry blossoms to prove it.

But as we look ahead to that meeting, will my fellow shareholders get in sync with this amazing and beautiful Easter season? Will they, unlike Mr. Campbell, really hear the pleas of millions of their fellow citizens to reduce the principal on underwater mortgages, stop funding inhumane detention centers, pay their fair share in taxes, and stop distorting our political system by bankrolling politicians who want to deprive people of color of their right to vote?

Or will Wells Fargo finally take responsibility for their actions, and begin to repair the damage they have caused? Will they at last stop imposing their cruel “Lent” on the rest of us, and get in sync with the joy and laughter of this Easter season?

—The Rev. Richard Smith is priest associate at the Episcopal Church of St. John the Evangelist, San Francisco.

Statements and opinions expressed in the commentaries herein, are those of the author(s) and not necessarily those of Episcopal News Service or the Episcopal Church.