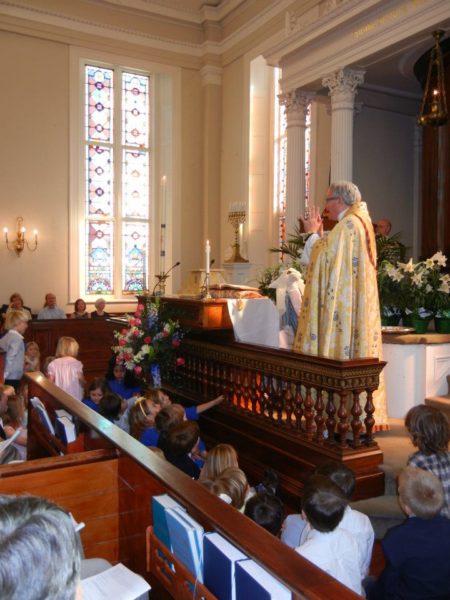 Rector Michael Wright of Grace Episcopal Church, Charleston, South Carolina, delivers a sermon at Easter services hosted by the city's Reform Kahal Kadosh Beth Elohim Synagogue, which offered its space to the Episcopal congregation, whose own facility is under repair from earthquake damage. Photo/Grace Church

[Episcopal News Service] With a little help from its interdenominational and interfaith friends, Grace Episcopal Church in Charleston, South Carolina, found a home in the wilderness this Easter.

The historic stucco church, founded in 1848, was deemed structurally unsound following the August 23 earthquake that rattled the East Coast, and has been closed for worship ever since.

While it was able to move smaller services to its Hanahan Hall, Grace’s 11:15 a.m. Sunday Eucharist was too large to be held there. Then there were funerals and weddings to consider.

Charleston is a popular spot for destination weddings, and the picturesque 166-year-old parish had taken additional bookings before the earthquake struck.

Christmas and Easter presented another conundrum — there was no room at the inn — until a call came in from the nearby Reform Kahal Kadosh Beth Elohim Synagogue.

KKBE’s board president, David Jaffee, pointed out that Christmas and Easter are not particularly busy dates in the Jewish calendar, recalled Emily Guerry, the rector’s assistant, and invited Grace to hold its services at the synagogue.

“I just about fell over,” Guerry said. “We were worried we might have to rent an auditorium.”

Grace held its Christmas Lessons and Carols service at the synagogue, and returned there for three services on Easter Day: 7:45, 9:15 and 11:15 a.m.

“They have just made us feel so welcome and at home,” Guerry said. Sextons were on hand to help, as were several members of the synagogue’s council. KKBE members assisted with the audio-visuals and refreshments, and the synagogue even provided the chocolate that is traditionally given out at Easter, said Grace’s rector, the Rev. Canon Michael Wright, noting that it was decorated with the Hebrew word for “life.”

The synagogue’s offer to share its “most sacred space” came during a time of deep division within the Episcopal Diocese of South Carolina, Wright said.

“It’s come at the right time,” he said. “Instead of focusing on division, we’ve got a new unity with the wider faith community to focus on. God is in the midst of us in strange and diverse ways.”

In addition to Easter at the synagogue, Grace’s Holy Week was something of a moveable feast.

The Maundy Thursday service, with foot washing, took place at the historic St. Mary of the Annunciation Roman Catholic Church (while the congregation of St. Mary’s worshiped at the Roman Catholic Cathedral of St. John the Baptist).

On Good Friday, Grace parishioners joined the congregation of St. Matthew’s Lutheran Church for the Adoration of the Cross – a Lutheran liturgy with music provided by Grace’s St. Gregory Choir. (Grace joined St. Matthew’s on Ash Wednesday for a service using the Episcopal liturgy).

The Good Friday Stations of the Cross and a Saturday morning Easter egg hunt were held at the Bishop Gadsden Episcopal Retirement Community. Then it was back to St. Mary’s for the Easter vigil and on to Kahal Kadosh Beth Elohim to celebrate the resurrection of Jesus.

Particularly moving, said Grace’s director for parish life Nancy Ezell Suggs, was the synagogue’s insistence that Grace’s congregation “worship in the manner and tradition that is important to your faith.” Likewise, she said, she realized what generous hosts St. Mary’s had been when she witnessed Grace’s female priest, the Rev. Callie Walpole, celebrating at the altar.

“We’ve certainly learned a great deal about the kindness of people whose beliefs are different than ours,” Guerry said. “We are worshipping the same God and we’ve come to know that in a deep sense. I think none of us in our wildest dreams could imagine that we would find so many friends in Charleston.”

Grace has seen its share of troubles: The parish survived shelling during the Civil War, an earthquake in 1886 and 1989’s Hurricane Hugo, which also displaced the congregation.

In 2005, the growing parish began to raise funds to expand its facility. But when architects were called in, they had some distressing news to report, Ezell Suggs said: “The steeples are leaning 6 inches in, the walls are leaning in, you’ve got some problems. The focus of the campaign changed from expanding ministry to saving our church home.”

The first phase of the project, a $12 million renovation of the church tower, began in 2008 and had just been completed when the earthquake struck. The tower remained strong, but sensors indicated that the stucco-over-brick clerestory walls, where deteriorating mortar had caused the bricks to pull away from each other, had become unstable.

On Easter Day, Grace launched a new $5 million capital campaign: Home to Grace. The funds will be used to pay down the remainder of the loan for the tower work and to strengthen the walls. Parishioners hope to be “home to Grace” this summer, though work will be ongoing.

“We were just getting over the first phase of the project and thought we would get some rest,” Ezell Suggs said. “There has not been much rest around here but there has been a wonderful, wonderful sense of cooperation and we wouldn’t have missed that for the world.”

“I think that we’ve learned, too, that as much as we love our building and as much as we miss it — and we do — that we are Grace Church wherever we go,” Guerry said. “The church is really the people who show up Sunday after Sunday. We’ve had to learn that in a very practical way.”

— Lucy Chumbley is a freelance reporter based in Washington, D.C.