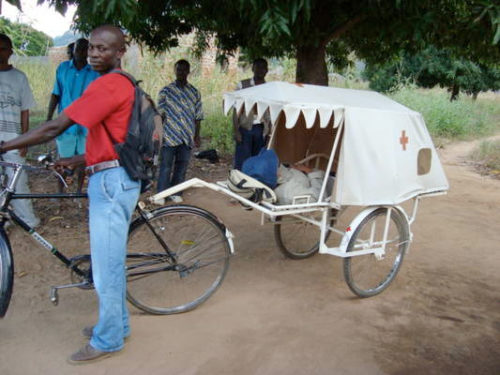 New funding from the PWRDF and CIDA will pay for 100 bicycle ambulances like this one to be used in African villages. Photo/Zaida Bastos

[Anglican Journal – Anglican Church of Canada] The Primate’s World Relief and Development Fund (PWRDF) has a new agreement with the Canadian International Development Agency (CIDA) that will provide $10.8 million dollars over five years for projects focusing on maternal and child health in 59 villages in Burundi, Mozambique and Tanzania.

“Through this five-year joint program, PWRDF and African partners will deepen and extend the impact of work already accomplished with CIDA funding in 2009-2011,” said Adele Finney, executive director of PWRDF in a statement.

“We’ve had exceptional results from those programs previously funded,” Finney told the Journal, adding that PWRDF staff is excited about the opportunity to expand on the work already begun with its local partners in the three countries.

PWRDF will contribute about a half million dollars per year to the program and CIDA will provide the remaining $8.1 million in a three-to-one match. “While it is more money from CIDA, it is also more money that PWRDF is putting forward for this program,” Finney explained. She added that the program will not require a separate fundraising strategy, but PWRDF will have to “communicate the good work and how it will be extended.”

For example, the new funding will pay for 100 more bicycle ambulances. According to PWRDF’s website, in Mozambique, one ambulance is currently serving a population of 400,000. Patients are sometimes carried on foot to the hospital or can’t get to a health centre at all. Pregnant women often arrive exhausted, suffer miscarriage en route or die. Bicycle ambulances have been shown to make a difference, serving approximately 2,000 to 3,000 people.

According to PWRDF, the new funding is expected to reach about 1.5 million people on issues of health and nutrition, cultural practices that negatively impact women’s health and better access to health care for pregnant women, mothers and children. Funding will also be used to build new clinics and train 1,690 community health workers, HIV and AIDS educators and caregivers in villages, as well as improve access to clean water and improve farming techniques.