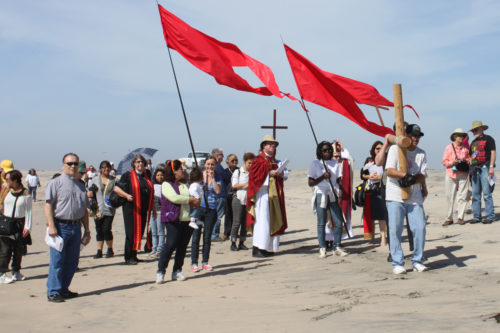 Bishop James Mathes of San Diego and Bishop Diane Bruce of Los Angeles are among a group of about 80 Episcopalians who took part in an April 2 Stations of the Cross pilgrimage from MacArthur Park in Los Angeles to the U.S. - Mexico border in San Diego, where the two bishops celebrated Eucharist as a simultaneous service was held on the other side of the wall. Photo/Janet Kawamoto

[The Episcopal News – Diocese of Los Angeles] Two 20-foot high steel walls between Tijuana and San Diego made seeing each other difficult and touching each other all but impossible, but they couldn’t stop Episcopalians and Anglicans on both sides of the border from celebrating the Eucharist together April 2.

The display of unity aimed a spotlight at the plight of the undocumented and on unjust immigration laws that separate and divide families, said Bishop Suffragan Diane Bruce of the Diocese of Los Angeles and Bishop Jim Mathes of the Diocese of San Diego.

With U.S. Border Patrol helicopters circling overhead, the two bishops blessed bread and wine at a 3 p.m. service on the U.S. side of the border at Friendship Park in San Diego. A few yards away across the border wall, clergy from the Anglican Church of Mexico did likewise.

“What a wonderful way to celebrate this Monday in Holy Week,” said Bruce afterwards. “At the end of the service, people (from the Mexico side) were coming up individually to the border wall and asking for blessings.

“It pushed me over the edge, in making me understand that there are no walls that can separate us from God’s loving grace. There is no border that can do that.” 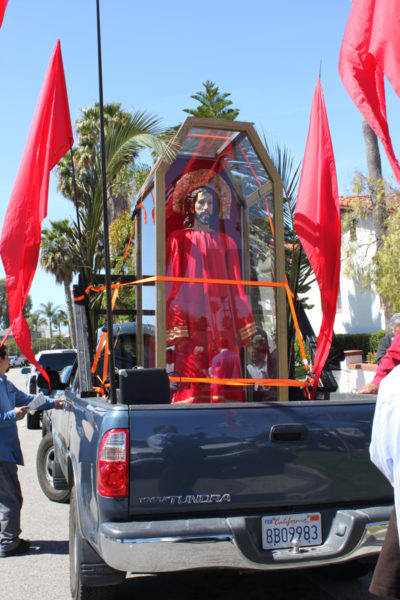 Their procession followed a 6-foot wooden statue of Jesus in a pickup truck some 130 miles southward along the Interstate-5 freeway, adding more pilgrims and praying progressive Stations of the Cross in Spanish and English at designated stops in San Clemente and Chula Vista before reaching the border.

“Today for us as Christians is one of the holiest times of our year — Holy Week — and we are telling the story of the oppression of our Lord Jesus Christ,” said the Rev. Liz Muñoz, rector of Trinity Church in Los Angeles, and a pilgrimage organizer.

“Many of us believe that Jesus was an immigrant from heaven to earth,” she told those gathered at MacArthur Park. “He came from heaven without documentation to teach us to love God and to love one another.

“We come today together to pray for just immigration laws that will allow families that have been together to continue to be here together to participate and be loved just as everyone deserves to be loved in this country.”

Indicating the gold-crowned statue of Jesus, wearing a brilliant red robe, inside a glass booth in the back of the pick-up truck, Muñoz continued: “This Salvador del Mundo came all the way from San Salvador [El Salvador] on a truck, crossing three borders. Today we are taking him back one border, the first border and we hope that some year at some point in our lifetime it will be the last border.”

Rosie Vasquz, 45, a parishioner at All Saints Church in Highland Park, said she felt compelled to join the pilgrimage “because of my faith.

“This is about my family, this is about my country, this is about Jesus’ love for us all,” said Vasquez who read prayers in Spanish at the first station, ‘Jesus is condemned to death.’ “I’ve never done anything like this before,” added Vasquez, who came to Los Angeles from Guatemala in 1986. “I’m so excited to be part of this.”

Christy Goulet, 23, and Jazmin Trammell, 25, Episcopal Urban Interns assigned to St. Mary’s Church in Los Angeles, said they joined the multi-ethnic group of pilgrims “to learn more about Episcopal traditions and liturgy” and to experience the connections between the stations of the cross and immigration issues.

“We are all pilgrims,” the Rev. Patrick Crerar, rector of St. Clement by-the-Sea in San Clemente, said while greeting the group from Los Angeles.

At St. John’s Episcopal School in Chula Vista, Bishop Mathes welcomed the Los Angeles pilgrims. The group emulated Jesus, “the great boundary crosser, who showed us the way of moving from the divine life to human life to life everlasting,” he said.

“This is Holy Week,” he added, “this is the week in which we remember Jesus’ death and look forward to his resurrection. If nothing else, I hope this pilgrimage is a moment of new life for those looking for hope.”

For Juana Cordoba, a lay leader at Church of the Messiah in Santa Ana, the pilgrimage was both personal and painful.

“I came up to get a job to support my children because I had nothing to feed them and no money in Mexico,” she said through an interpreter. She went back and forth between countries until gradually she could bring her children with her, added Cordoba, a single mother of six, tearing up at the mention of that separation.

“I want to do something about the separation of families,” added Cordoba, whose family eventually became U.S. citizens. “I want to try to work toward a solution because so many people today don’t have documentation. I feel very much in solidarity with them. My greatest wish is that there be some kind of program where people could get documentation to work.”

Blanca Ruelas-Suárez, also a parishioner at the Church of the Messiah, agreed. “I am here to support those who aren’t fortunate enough to have the documentation I have, and in the hopes that our government leaders will pay attention and do something to help them,” she said through an interpreter.

“I am also here to honor and grieve the persons who have died trying to cross the border.” 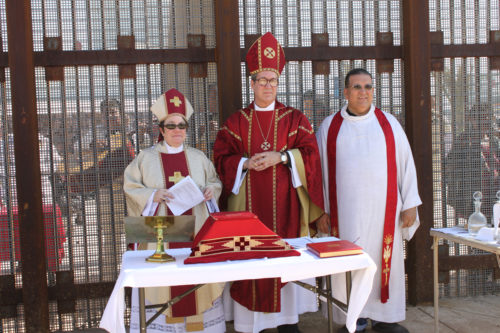 Bishop Diane Bruce of Los Angeles and Bishop James Mathes and the Rev. Carlos Garcia of San Diego prepare to celebrate Eucharist in front of the U.S. - Mexico border wall. The service was celebrated simultaneously on the other side of the wall. Photo/Janet Kawamoto

The group had grown to about 80 by the time pilgrims reached Friendship Park, located inside the Border Field State Park. There, in the space between the two walls, Eucharist was held.

Pilgrims carried crosses and red banners during the half-hour walk along the ocean to the border walls. Cheers, whistles and applause rang out from about 180 pilgrims gathered on the Tijuana side as they saw the U.S. group approach. Shouts of “no one is an immigrant,” rang out; a mariachi band began to play.

The Eucharist at the wall was carried out with the permission and full cooperation of the U.S. Border Patrol, according to Bruce.

Only 25 people were allowed into the space between the walls at a time. As each group of 25 entered to receive communion, they were drawn to the fence to try to touch, to greet, to connect with those on the other side.

“I saw a long-time friend of many, many years over there,” said the Rev. Roberto Limatu of Los Angeles. “This is a very, very good day.”

For Luis Garibay, building superintendent at the Cathedral Center of St. Paul in Los Angeles, loading the 6-foot Jesus statute onto the pickup truck and then driving it to the border was an experience all its own.

“People would pull up next to us on the freeway and look inside the truck at us. Then they’d drop back and snap photos of Jesus. I heard that somebody put one of the photos on the Internet and said, ‘Jesus is driving on the freeway.'”

The Rev. Jennifer Hughes, who teaches Latino studies at the University of California at Riverside, came up with the idea for the Via Crucis pilgrimage and said she was happy at the pilgrimage turnout but added that she hoped “for a more sustained Eucharistic community, more than annually. It’s my hope there will be some kind of regular Eucharistic witness at the border.”

The Rev. Carlos Garcia, vicar of Santa Rosa del Mar Church and priest-in-charge of St. Philip the Apostle Church in Lemon Grove in the San Diego diocese, agreed that the effort should continue.

“Today gave me more of a sense about why we are here. It’s about uniting families. I would absolutely do it again.”

The Rev. Butch Gamarra of the Diocese of Los Angeles said he hoped the pilgrimage would draw attention to the issues “in a way that people can hear it. This can be a very polarizing issue and we need to help lift up the plight of immigrants. It’s a human tragedy. You can’t call God’s people illegal. No human being is illegal. You might be undocumented, but you are not illegal.

“We have to raise up the plight of how families are broken apart, how traumatic it is for children when their parents are deported, when they can’t stay in school. People of faith especially should raise our voices in advocacy and try to bring immigration reform to some kind of resolution so people can just live normal lives and be treated as people, not political pawns.”

— The Rev. Pat McCaughan is a correspondent for The Episcopal News of the Diocese of Los Angeles. 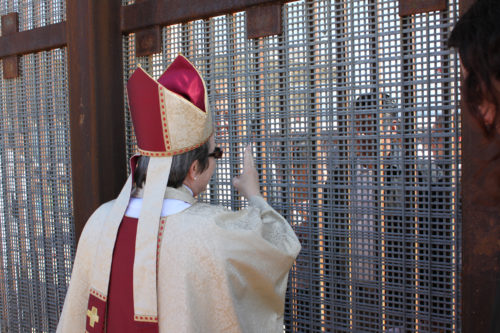 Bishop Diane Bruce blesses participants on the Mexico side of the border. Photo/Janet Kawamoto