[Episcopal News Service] This is one of a series of articles by ENS examining women’s history in the church. 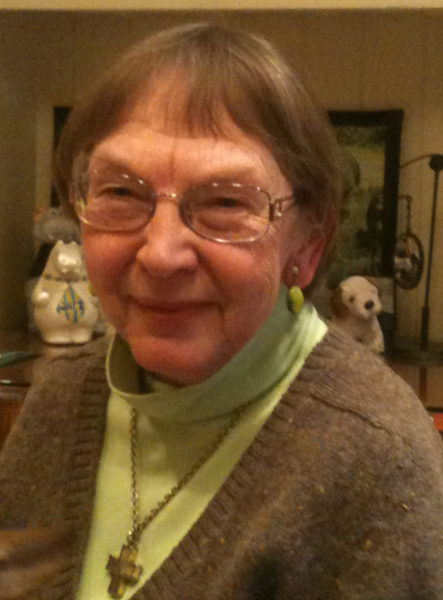 In the church, discussions of “call” often center on ordination. But Alda Marsh Morgan of Berkeley, California, followed a call to professional lay ministry – a call that, ironically, was disrupted when women’s ordination became possible in the Episcopal Church.

Born in 1939 in Dayton, Ohio, Morgan grew up in a Baptist parsonage but became an Episcopalian while attending Oberlin College (http://new.oberlin.edu/). After graduating, she entered the Episcopal Church’s Apprenticeship Program, “which provided women a year of internship in various ministries to test a vocation as a lay woman church worker,” Morgan said in an ENS interview conducted via e-mail. “Although my internship was in a social-work agency, I already knew that I wanted to be a campus minister.”

She next entered St. Margaret’s House in Berkeley, one of a handful of schools that trained Episcopal deaconesses. Deaconesses were officially recognized as an order of women in the Episcopal Church “set apart” for servant ministry but not as ordained deacons, Morgan explained, adding that she was uninterested in becoming a deaconess. She earned a master’s degree in Christian education and accepted a position at what now is West Chester State University, southwest of Philadelphia, to begin a ministry based at Holy Trinity Episcopal Church. “My supervisor was the diocesan director of campus ministry, but I was considered part of the parish staff.”

At her supervisor’s encouragement, she organized an ecumenical ministry sponsored by six local congregations – Baptist, Episcopal, Lutheran, two Presbyterian, and United Church of Christ. “Those six years were immensely satisfying, as I got there just as the college was beginning to broaden its formerly educational programs to liberal arts. The ’60s were a time of great change and stir, and Bishop [Robert] DeWitt’s leadership on the diocesan level was exhilarating. I was part of his ‘cadre’ of supporters and colleagues, and it seemed as if a new sun was rising and everything was a possibility.”

But that same leadership helped precipitate a “severe shortfall of diocesan funding” that led her to leave. “His strong support for civil rights and other liberal causes raised a lot of opposition in what was then a conservative diocese,” she said.

“I had left because my work with the local churches in a small county seat raised questions for me about the relationship between American Protestantism and higher education, so I went back to Berkeley for a doctorate in history. … I looked upon my graduate work as professional continuing education.”

She entered the Graduate Theological Union in Berkeley, becoming involved both in campus ministries and at St. Mark’s Episcopal Church, and seriously considered the possibility of ordination. “We talk about ‘discernment’ now, and my decision was that I wasn’t called to the ordained ministry, but … did have a calling to ministry as a lay woman.”

While she was a college student and afterward, she said, “there was a robust community of professional women church workers, supported by the church, although not widely understood at the grassroot levels.”

“Most of us were in Christian education, but many of us were in social work (for church related agencies) and campus ministry. Many women, like myself, had begun campus ministries, later relinquishing them to clergy. My thinking then was that it was a tossup as to which was the bigger obstacle for me and other women workers – being a woman or being a lay person. After the ordination of women was passed [by the General Convention in 1976], I learned the answer: It was being a lay professional in a clerical church.

“What happened, with startling speed, was that most of us lost our jobs. Much of the work that women workers had done depended on the need for ministries in areas that male clergy either wouldn’t touch or where they cost more than the women. My supervisor had told me up front that he looked for a woman for West Chester because he couldn’t afford to pay a clergyman. … But the bottom line for me after 1976 was that the vocation to which I was passionately committed – campus ministry – was no longer available to me. The last position I applied to was at Northwestern and, notwithstanding my education and experience, I was told I was out of the running because I wasn’t a priest. Ironically, the job went to a woman priest, a friend and a damned good minister.”

“Subsequently, I made work for myself in campus ministry—as the volunteer provincial coordinator of ministry in higher education for Province VIII and then, in a program I designed … LEAVEN, a three-year ministry development program with faculty and staff at [the University of California]. While working in LEAVEN, I was asked to consult nationwide by colleagues who wanted help with their faculty/staff ministries. But it wasn’t until I was hired as the interim director of continuing education at [Church Divinity School of the Pacific] in 1989 that I again held a paid position working for the church. I worked in that department under three deans until 2003, when I took early retirement. Theological education became my new ‘vocation,’ but I never lost my yearning for and commitment to campus ministry. It took years to recover from the anger and resentment I felt once I realized that I was, in effect, barred from that work.”

Morgan married Donn Morgan, who became CDSP’s dean and president, in 1975 and received her doctoral degree in 1984. “My own field is American religious and intellectual history with a specialty in higher education and its relationships with the churches,” she said. Her work has included research and writing about women church workers. “I think it’s a great story, and I am so pleased that in recent years the women seminarians at CDSP and women elsewhere are beginning to broaden their interest in their past to include the women missionaries, the sisters, deaconesses and church workers as their foremothers.”

She sees the advances women have made in leadership roles in the church – from governance to ordination – as “positive for the church’s mission in many ways and way, way overdue.”

“On the other hand,” she said, “the possibility of ordination has closed the ranks for lay women who wish to serve the church professionally.”

“Finally, oddly, when women had to work through segregated organizations – the Women’s Auxiliary, the Order of Deaconesses, the Division of Women’s Work – we had a spirit and a sense of mutual community and support that we seem to lack now.” While not looking to return to the past, she said, “I grow a little wistful about the loss of esprit that we once had.”

Through the years, she has served the church at all levels, including as a member of the Standing Commission on Ecumenical Relations and as a representative to the National Council of Churches General Assembly. “In all these various forms of service and ministry,” she concluded, “I suspect that my advocacy of the importance of education is the connecting link – even when it isn’t obvious.”

Sharon Sheridan is an ENS correspondent.