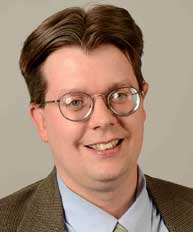 [Episcopal News Service] On March 31, I spent a day with Poles from a wide range of backgrounds gathered at St. Martin’s Lutheran Church in Krakow to participate in a process of discerning whether to establish an Episcopal Church community in Poland. Supported by a generous grant from the Evangelical Education Society, I designed this program along with co-organizers Jarek Kubacki and Lukasz Liniewicz. They run a bilingual Polish/English blog, Don’t Shoot the Prophet, that promotes the teachings of the Episcopal Church for a Polish audience. Along with us, Bishop Pierre Whalon of the Convocation of Episcopal Churches in Europe spoke and celebrated the first-known Eucharist according to the Anglican rite in the history of Krakow.

When Jarek and Lukasz began their blog in 2009, their purpose was to portray the Episcopal Church in a positive light to Poles who’d only ever heard about the church in the context of controversy and schism. But the interest generated by the blog led to people asking about having an Episcopal Church presence in Poland. From these requests grew the inspiration for the meeting this weekend.

Those who gathered represented the current state of religious life in Poland. Attendees were from Roman Catholic, Orthodox, Lutheran, Reformed and Old Catholic backgrounds. Many who attended were unable to participate fully in the current forms of church life and leadership in Poland because of their gender or sexual orientation. While small sectarian churches have sprouted up that are inclusive in nature, the participants didn’t see these churches as an option. There is nothing in Poland like the Episcopal Church, a church that is rooted in the catholic traditions of the ancient church while intellectually open, ordered according to the apostolic succession and retaining the primacy of Scripture while also admitting all people to all forms of ordained ministry, including women and members of the lesbian, gay, bisexual and transgender community.

As we discerned together, it soon became clear that those who had come to this meeting keenly felt the need in Poland for an Anglican way of being Christian found in the Episcopal Church. People expressed joy and gratitude that the Episcopal Church provides a way of being faithful to the apostolic traditions of the ancient church while remaining truly open to all people. As a result, plans are already underway for a retreat focusing on Anglican prayer and spirituality sponsored by the Convocation of Episcopal Churches in Europe to be held this June in the city of Poznan.

These days it seems like the only news we Episcopalians pay attention to is the bad news of Anglican Communion conflicts, budget crunches and declining numbers. But this Saturday in Poland was a whisper of good news that should be shouted from the rooftops. The Episcopal Church has a clear message that has been received with enthusiasm by a group of Poles, virtually all of them under the age of 40 and many of them still in college. They see in the Episcopal Church a way of following Jesus that allows them to maintain their core identity of believers in the Gospel while being fully open to all. This is a message that resonates not only in Poland but throughout Europe, where the Episcopal Church is growing. The genius of Anglicanism is that it provides a way of being part of the broad catholic traditions of the church while able to adapt itself to local contexts. This weekend a Rite II Eucharist from the 1979 Book of Common Prayer was celebrated in Polish. If God is willing, in a few years it might be celebrated weekly and in many places in Poland. And if in Poland, why not elsewhere in Eastern Europe?

The big message for Episcopalians from the meeting in Krakow this weekend is to take heart. Look past the anxiety of decline and talk of schism. There are many people thirsting for the teachings of Jesus that we offer. They will gladly receive it if only we follow the call of Jesus to go out and offer it.

— Daniel Joslyn-Siemiatkoski is associate professor of church history at Church Divinity School of the Pacific. He can be contacted at djoslynsiem@cdsp.edu.