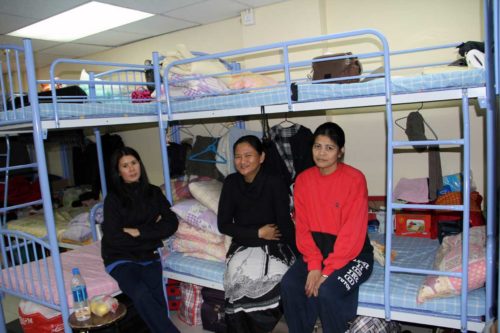 [Episcopal News Service] To many people, they’re invisible. They raise the children; walk the dogs; and do the shopping, the cooking and the cleaning. Going to bed at 2 a.m. to rise again at 6 a.m., they sleep in bathtubs, atop refrigerators or in the same room as the children and teenagers they care for. They are domestic workers from impoverished South and Southeast Asian countries from which the supply of migrant labor to Hong Kong seems unlimited.

Most of the 300,000 domestic workers in Hong Kong – a major center for international trade and finance – come from Indonesia and the Philippines, followed by Nepal, Thailand and Sri Lanka, according to advocacy organizations.

The unending supply makes the women vulnerable to exploitation and abuse: sometimes physical and emotional, but more often underpayment and other labor issues, leaving domestic workers, if they can summon the strength to navigate an unfriendly, unfamiliar legal system, to wait out employment claims in shelters while praying for justice and facing deportation.

Once such woman is Eleanor, 40, a Filipino woman supporting her adopted 9-year-old son, father and sister, who live in a house she owns outside Manila. After working for two years and two months without incident as a domestic in Bahrain, that country’s civil unrest forced her to return to the Philippines. From there, a friend helped Eleanor (an alias used here to protect her privacy) get hired through a recruitment agency sending domestic workers to Hong Kong.

“It was my dream to work here in Hong Kong, but it has become a nightmare,” said Eleanor in late February. Propped up by pillows, she sat, legs extended, on a twin mattress on the bottom bunk of Bethune House Extension, one of five shelters for domestic workers in the city. “I don’t have friends here or relatives.”

“The clientele that we have are the most despised, marginalized,” said Cynthia Ca Abdon-Tellez, the mission director and a social worker. “[There exists] a culture of exclusion.” 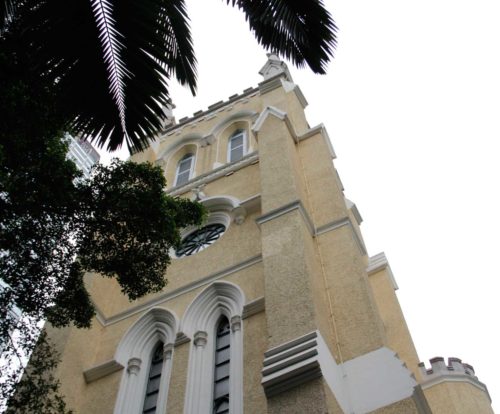 Founded in 1981 and based at St. John’s Anglican Cathedral, the mission provides direct welfare services, including paralegal and legal assistance; temporary shelter; training workshops and educational campaigns informing migrants of their rights; and advocacy and organizing. With a HK$125,000 budget (US$16,000), the mission employs three full-time staff and relies on regular and student volunteers, including one Episcopal Church Young Adult Service Corps volunteer. It has been designated an Episcopal Church Center for Jubilee Ministry.

In 2011, the mission served more than 3,000 walk-in clients – 2,023 of them new migrant workers – and handled another 2,382 ongoing and new cases. Ninety-nine percent of the people served were women; 78 percent were Filipino, 21 percent Indonesian and the remaining 1 percent Nepalese, Thai and Sri Lankan. Fifty-two percent were married, 42 percent single and the remaining women widowed or divorced. The average age was 35; 40 percent of the women have at least a college education. Eighty-six percent were sending money home to support children and other dependents, according to the program’s statistics.

The statistics indicate that the number of migrant workers seeking assistance from 2010 to 2011 almost doubled, with a significant increase in the number of Indonesians seeking help.

Abdon-Tellez, a social worker from the Philippines who has been with the mission from the beginning, noted that it has increased its organizing efforts as migrants have become more comfortable speaking out.

Hong Kong first opened its labor market to foreign domestic workers in the 1970s. “As the economy in Hong Kong improved, women went to work and demand for domestic workers increased,” said Holly Carlos Allan, who manages Helpers for Domestic Helpers, an outreach program also based at the Anglican cathedral that offers advice and guidance to domestic workers on immigration and employment issues, seeing the clients through the claims process.

Filipino domestics made up the first wave and in 1990 totaled 69,000 workers, compared to 1,000 Indonesians. By 2000, the numbers had increased to 151,000 Filipinos and 55,000 Indonesians. Now Indonesian workers hold favor because, Allan said, “they are less organized, less educated and complain less.”

Helpers for Domestic Helpers was founded in the 1980s by a group of lawyers and member of St. John’s who were concerned about the plight of foreign domestic workers. Besides Allan, the organization employs two part-time workers and relies on eight to 10 volunteers. In 2010, it saw 1,436 new cases and handled 4,000 total. The cathedral donates the space and pays some operating expenses. The remaining 50 to 60 percent of the HK$450,000 (US$58,000) budget comes from grants, fundraising and individual donations. 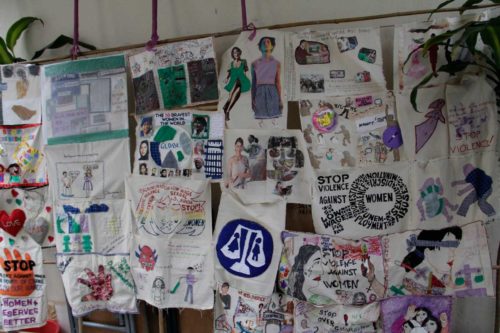 Domestic workers created this vision board during a workshop aimed at educating them about their rights. ENS Photo/Lynette Wilson

In countries like the Philippines and Indonesia, where unemployment rates are high and most of the population lives in extreme poverty, the stage is set for exploitation. It’s not uncommon, Allan said, for employment-agency recruiters to go house-to-house in small Indonesian villages, offering jobs to women. These agencies typically require domestic workers to pay an illegal broker’s fee, between HK$15,000 and 20,000 (US$1,900-2,500). Many of the women are forced into a loan to cover the fee, which is then deducted from their earnings over the next five to seven months. The minimum legal salary limit for domestic workers is HK$3,740, or $480 per month. Hong Kong-based employment agencies can legally collect 10 percent of the first month’s pay earned by a domestic worker.

“Their passports are taken until they pay back the loan, in order to control them,” Allan said, speaking with ENS in her office at the cathedral in the heart of Hong Kong’s financial district. “There have been cases where, after the loan is paid, they are terminated.”

There have been cases, she added, in which a domestic worker has had four employers in two years. Each time she re-pays her loan, her contract is cancelled.

Eleanor said she paid 90,000 pesos, or US$2,100, to loan collectors who harassed her pregnant sister when she was unable to pay. Eleanor feared, she said, that she would need to sell her home to satisfy the loan.

The government of Hong Kong, which is a Special Administrative Region of the People’s Republic of China, has detailed rules and regulations governing the employment of foreign domestic workers. For instance, employers must have a monthly income of at least HK$15,000 (US$1,900), contract with a live-in domestic worker for a two-year period and provide “suitable and furnished” accommodations, food, and transportation to and from her country of origin.

Correspondingly, domestic workers enter Hong Kong with a two-year work visa conditional on employment. If a worker files an employment claim, she forfeits her right to work while the claim is in review, and she has two weeks to leave Hong Kong or must make periodic payments of HK$160 to extend her visa until the claim is resolved.

“If a helper complains, it’s they who get prosecuted,” said Allan, adding that the government’s lack of will to enforce existing laws is one of Helpers for Domestic Helpers’ main obstacles.

In Eleanor’s case, she tried to break up a fight between a mother, her employer, and her employer’s daughter. In the struggle, the daughter bit her. Eleanor went first to the hospital for a tetanus shot and then to the police to file a report. Eventually, she found the Bethune House Extension shelter. She filed a claim against her employer to cover an airline ticket and other transportation fees and 11 days work. Her employer filed a counter claim alleging that Eleanor “ran away” without giving the required notice.

It’s not uncommon to have a Chinese police officer whose first language is Cantonese interviewing a Filipino woman in English. If the officer doesn’t speak English, he’ll get the story from the employer, said Kathleen Clark, the Young Adult Service Corp volunteer serving with the Mission for Migrant Workers.

Padding around the shelter in house slippers, Eleanor moved slowly, slightly stooped, a hand on her belly. In early February, she had a hysterectomy and later that month was diagnosed with stage-three ovarian cancer. Eleanor wished to get the money owed her and return to the Philippines. A court date was set for early March.

Moving out of the shadows 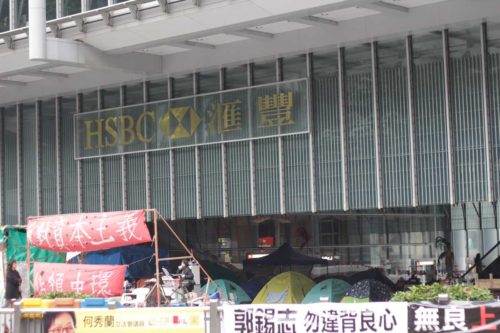 On Sundays, their Sabbath day, domestic workers can be seen gathered at the banking headquarters of HSBC, a building with an open foundation, where they play cards, talk and share meals. And they gather at St. John’s Cathedral, which offers an afternoon sung service in Filipino. A secondhand clothing store also is located at the cathedral, and Helpers for Domestic Helpers and Mission for Migrant Workers conduct workshops and hold office hours.

“Sometimes they are treated as an annoyance, especially when they gather on Sundays,” said Allan, noting, as Abdon-Tellez did, the existence of a culture of exclusion.

International recognition of the plight of the estimated 53 million to 100 million domestic workers worldwide lead the United Nations International Labor Conference while meeting in Geneva in June 2011 to adopt a “Convention and Recommendation on Domestic Workers.” It states that workers around the world who care for families and households must have the same basic labor rights as those available to other employees, including reasonable work hours, 24 consecutive hours weekly of rest, limits on in-kind payments, clear information on terms and conditions of employment, and the right to collective bargaining. (The International Organization for Migration estimates that there are 214 million migrant workers (one in every 33 people) in the world.)

But despite existing laws and the international recognition, employers treat domestic workers as if they have no recourse, said Helpers’ volunteer Regi Frection, an American from Annapolis, Maryland, with a law enforcement background. Frection, whose wife works in banking, got involved with helping domestics when a woman who worked for a neighbor in his apartment building needed assistance.

In fact, employers are “bold and blatant” about it, he said. But domestic workers who seek help arrive St. John’s with slumped shoulders and leave empowered, he added. “So many come here and all they want is to be treated like a human being.”

Melina’s case offers a glimpse of the “bold” and “blatant” behavior Frection referred to — and testifies to the empowerment.

Melina, 36, also from the Philippines, was among the 15 women staying in Bethune House when ENS visited in late February. She’d been chronically underpaid for two years. For the first year, she was underpaid by HK$100 per month, and she eventually moved on to another employer. The second employer would deposit Melina’s pay into an account, which is the payment method favored by the government, get Melina to sign a receipt saying she’d been paid, and then withdraw the money himself, all of which was recorded by ATM surveillance camera, she said.

Melina (not her real name) has a four-year degree in restaurant management but couldn’t find work in the Philippines, where nurses and other medical professionals often make less money in a month than domestic workers in Hong Kong, she said.

Melina appeared undeterred by her situation and had no intention of returning to the Philippines. “I want to stay in Hong Kong and find work, and then I want to move to Canada,” she said, in rapid-fire English.

By the end of March, Eleanor’s HK$7,617.50 labor claim had been settled for HK$ 1,394.68 plus return airfare to the Philippines and the illegal agency fee of 90,000 pesos settled for HK$6,000, US$772. Regarding the assault by the employer’s daughter, Eleanor didn’t file charges but simply reported the incident to police, according to her caseworker’s report.

She is back in the Philippines and seeking cancer treatment.

— Lynette Wilson is an editor/reporter for Episcopal News Service. She reported this story in Hong Kong.