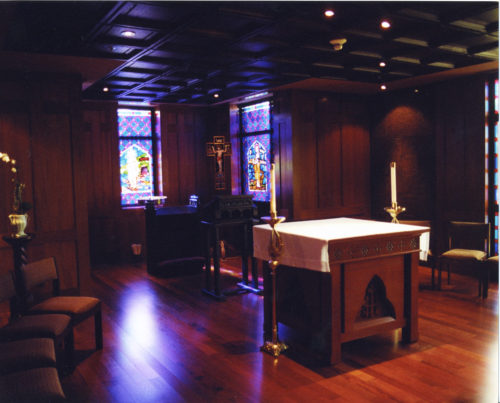 The Lazarus Chapel at the Cathedral Center of St. Paul in the Diocese of Los Angeles as redesigned by Cindy Voorhees.

[Episcopal News Service] This is one of a series of articles ENS is publishing during Women’s History Month.

As a liturgical designer and builder of churches, the Rev. Canon Cindy Evans Voorhees knows the ins and outs of entrances and exits, apses and naves. But in her vocation, it’s the back door she’s found particularly useful. 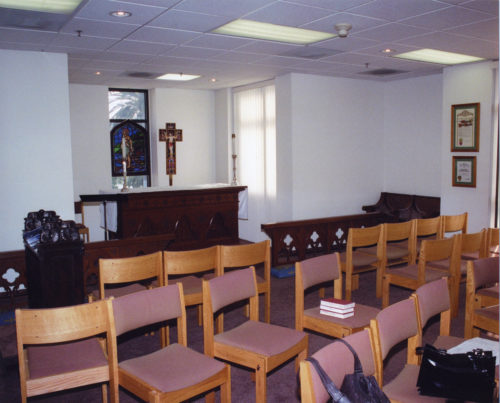 The Lazarus Chapel before it was redesigned.

“I happen to navigate the field of women’s equality by ‘back-dooring’ every time: OK, I’ll find a way,” she said.

While today she is an Episcopal priest in the Diocese of Los Angeles, she wasn’t allowed to be an acolyte while growing up in what now is the Evangelical Lutheran Church of America. “I asked, and they just kind of said, ‘Oh, no, just the boys.'”

“I didn’t get angry. It was just the way things were,” she said.

Wishing to play baseball in grade school, she was told girls didn’t play baseball; they were cheerleaders. Instead, she became “an excellent tether ball player.” 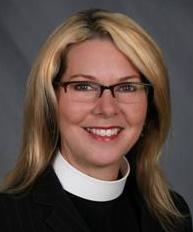 “I was always very athletic. I never let my female body hold me back, but I think at times the world did. I would just go around.”

Her father, a sociologist and master carpenter, told her: “No daughter of mine is going to be a secretary. You’re not taking home ec and typing. … If you know those things, that’s what they’re going to ask you to do.”

“I took wood shop, auto shop, metal shop and drafting,” she said. “I was actually a teacher’s aide in college in metal shop and wood shop at a local junior high … My father was always pulling me into the garage, building things. I always like to say I can swing a mean hammer.”

Entering college, “I just assumed I’d go right into architecture classes.” But when she inquired, “the professor said no, I would just disrupt his class as a girl.

“So I went over to the art department and majored in fine art. My first job was in the design and construction department of a major furniture firm.”

In 1985, she said, “the president fired everyone in the department and told me to get ready to build buildings, and then I switched companies and built buildings there.” She earned a general contractor’s license and, self-taught, passed tests to become a certified interior designer. “I became a designer, became a contractor, and 20 years into it, people just called me an architect.”

She moved from California to Texas to Washington, D.C., to Chicago and finally back to California, where she now lives in Huntington Beach. When she was leaving Chicago, the pastor at the nondenominational church she was attending wrote ahead to the pastor at a church in California. When she arrived in 1990, the pastor asked her to make an appointment to see him. “I walked in, and he had the blueprints there and said, ‘Would you build me a church?'”

That’s where she met her future design partner, liturgical consultant Walter Judson of Judson Studios, who mentored her until his death 10 years later. That launched her own career in liturgical design. She’s been involved in projects at more than 300 churches, plus some synagogues and one Hare Krishna temple.

A window honoring St. Julian of Norwich in the church of the Cathedral Center of St. Paul, Diocese of Los Angeles, is shown here in Cindy Voorhees’ original rendering.

“This is a vocation,” she said. “A typical designer off the street could not do church design. It’s a long time of education on what each denomination wants – their customs, their rituals. You have to learn the language of each denomination or non-denomination. You have to know their government, whether it’s a session or a vestry or a council or the elders. … It takes extreme patience to work with committees and congregations processing change.”

Meanwhile, Voorhees had left the Lutheran Church and had been attending nondenominational churches.

“When I was little, probably 8 or 9, I kept looking at the pulpit going, ‘I think I am supposed to be up there,'” she said. “The Lutheran model of a pastor … wasn’t the right fit for some reason. I let it go and went on to college. You get on with life.”

After she began designing churches, she started having “weird feelings, like God knocking on the door. I remember wondering why I had this feeling that I was being drawn to the altar, the pulpit.”

In 1993, she walked into St. Wilfrid of York Episcopal Church in Huntington Beach, where a female priest was celebrating Eucharist. “A flood of emotions hit me like a ton of bricks.” She realized: “that’s the call, the priesthood. … I remember sitting there in the pew sobbing.”

“And then I ran from it for about five years,” she said. “Finally my spiritual director said, ‘I think you’d better enter the [discernment] program.'”

Voorhees was ordained to the diaconate in 2004, the priesthood in 2005. She an assistant at St. John’s ProCathedral in Los Angeles but continues her work through her business, Voorhees Design. Most of the top liturgical consultants in the country are ordained priests, she noted.

More than 35 years after General Convention approved women’s ordination to the priesthood, Voorhees still sees a “stained-glass ceiling” in the Episcopal Church.

“That glass ceiling is not going to break until the image of God is not solely male, because as Christ’s representative on earth, as the priest we’re still using male imagery to represent that image,” she said. The “ceiling” won’t shatter until “we really start using inclusive language and really modeling and teaching that God is not some man with a white beard up in heaven,” but rather that God is “neither male nor female,” she said. “It probably isn’t going to happen in the near future, and that’s why I continue to walk the line in history as a female priest, modeling the priesthood as wholly male and female. We need both to be complete.”

“We can support the image of God as male and female through the arts,” she added, “through the stained glass, through the icons, through the sculpture imagery.”
She designed the stained glass at St. Paul’s Cathedral Center in Los Angeles, including images of Julian of Norwich, Hildegard and Teresa of Avila and an icon at the altar of women around the crucified Christ. “It was very intentionally designed with women in mind, and that was wonderful that [Bishop Diocesan J. Jon Bruno] did that.”

Working in so many churches has given Voorhees a global perspective on the challenges facing the Episcopal Church and how “it’s a very similar plight right now” across denominational lines. In an increasingly secular culture, she said, the church’s evangelism language and strategy must be “completely revamped and modernized.”

Apple now uses the term “evangelist” for its sales team and calls its stores “Apple chapels,” she said. “Apple is its own religion, and we’re kind of losing ground … We’re not reaching [average people] where they are right now. It’s a pretty hurting world, and we keep thinking everyone is going to come in our doors.”

“We need some charismatic spokesperson that can really speak to the media and speak to the issues of the day, and in a very candid way,” who will become the Episcopal Church’s “go-to” person for news outlets such as CNN that currently focus on asking evangelical men for religious viewpoints, she said.

“We need to embrace technology,” she continued. She’d like to see bishops and churches keep contact via Skype and apps and games and stories and films designed “so that they can be used on iPads in every nursery and Sunday school, because that’s what the kids are going to be using.”

Other ideas for revitalizing the church include electing more Episcopal government officials and moving the church center to Washington, D.C., closer to the “heartbeat of government and shaping policy”; investing in leadership and evangelism training; and teaching tithing, she said. “We have to raise up our brightest and best leaders and help them set the vision in the church.”

And, she said, the church must “re-brand and remarket” and “take our message to the street.

“We have to go into the highways and byways. They’re not coming in.”

“To me, the Episcopal Church is what most people are looking for,” she said. “They just don’t know who we are.”