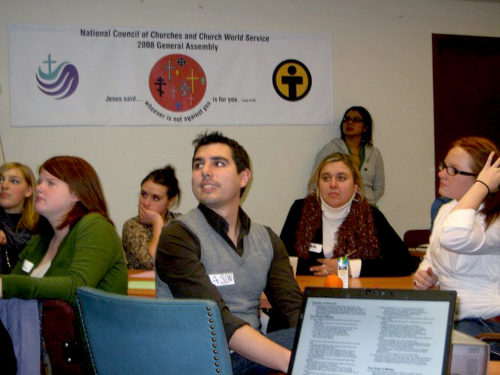 An ecumenical group of young adults attends a workshop during a meeting of the United Nations Commission on the Status of Women. Episcopal Church representative Andrea Bardelmeier is third from left; at front center is Jason Sierra, Episcopal Church officer for young adult leadership and vocations.

[Episcopal News Service] Two years ago, Andrea Bardelmeier attended the meeting of the United Nations Commission on the Status of Women with a group of other Episcopal young adults. “That was kind of a life-changing experience,” she says.

Now a leader in ecumenical and multi-faith ministries at Xavier University in Cincinnati, she is spending this week at another young adult “immersion” experience through the Episcopal Leadership Institute, this time focused on Episcopal Migration Ministries.

The institute is an initiative of the Episcopal Church’s Young Adult Campus Ministries Office that officially began last year and grew out of the church’s UNCSW young adult programs that started in 2009. “Basically, it is to connect young adults with the leadership of our networks to really see how we can infuse new leadership into those networks and also help the young adults gain access to what each is doing on a bigger scale,” said Jason Stewart Sierra, officer for young adult leadership and vocations.

The institute focuses on four components, starting with short-term immersion experiences where small groups of young adults – ages 18 to 30 – attend a church gathering around an advocacy issue. The first such experience happened in 2009, when 10 young women spent a week at the UNCSW. “That was an opportunity for them to see on a big scale how women were organizing around gender justice and women’s rights and to see how the Episcopal Church was involved with that,” Sierra said.

Later programs included one with Churches for Middle East Peace, which included advocacy training with the Episcopal Church Office of Government Relations, and an eco-justice immersion experience in Seattle for 20 young adults. So far, 73 young adults from at least 41 dioceses have participated in institute programs, including the UNCSW visits.

“The second piece is to really look at Episcopal identity formation, so we open and close every day with a daily office,” Sierra said. They explore Episcopal polity “so that people have a fuller understanding of how this work of advocacy fits into our broader structure.”

Third, participants have a chance to be mentored by experts in the field, “not just watch from a distance,” Sierra said. “We try to take them to really where the conversation is vital, so that we’re not sort of babying them into the work, but taking them directly to access the leaders in our church where the work is really dynamic. … With the Middle East Peace, they had this opportunity to go directly to [Capitol] Hill and to be around all these leaders who had been working on this issue for a long time.”

Finally, he said, “we really try to engage them in leadership-development training.” This means fostering presentation and facilitation as well as advocacy skills, “so that they can begin to think of themselves as faith leaders, whether or not they’re operating inside the church.”

Participants must write about their immersion experiences for their diocesan publications and do a presentation, “so they begin to be seen as an advocacy leader in their home communities,” Sierra said. The institute supports participants in forming communities that stay in touch with each other, and connects them with church networks. “Our role is really to help them make the connection and to prepare them to do the work.”

The hope, he said, is that the young adults will begin working in the existing networks, rather than remaining segregated.

This week, four young adults involved in campus ministry have joined Sierra at the Episcopal Migration Ministries annual conference in Atlanta. They will spend time focused on how to engage campus ministries with EMM’s work, Sierra said, noting this is the first immersion experience that drew few applicants. “It was somewhat of a surprise.”

“That’s interesting,” Bardelmeier said, “because I think it’s really an issue for our time, and I wonder where the disconnect is.”

“I would love to do some work connecting Xavier students with refugees,” said Bardelmeir, 29, who is assistant director of the Dorothy Day Center for Faith and Justice at the university.

Dan Trudeau, EMM program manager for communications and media development, first worked with refugees through a service-learning group at college in Michigan, volunteering at a program assisting people seeking asylum.

“I know how powerful an impact an experience like that can be at that age,” he said. “It was really fascinating for me because I got to meet all these people from all these different countries … It was eye-opening.”

At this week’s conference, he said, “Our plan is to have the young adult participants engage directly with the staff that we have in our affiliate network who do outreach to churches.” Participants will receive training on church outreach techniques for building awareness and support for the refugee-resettlement program.

“We really want to build the next generation of advocates and supports for refugees in the church,” Trudeau said. “I’m hoping that this first-hand interaction with our local staff people who are operating in their diocese and in their communities will really give these young adults a picture of all that goes on to welcome refugees into the United States and an idea of how they can contribute to really having a positive impact on the effort.”

Ashley Pagan, 23, graduated in December from the University of Arizona and learned about the EMM immersion experience from the campus chaplain. Moving to Tucson and working with immigrants had piqued her interest in immigration and refugee issues, she said. She volunteers regularly at a food kitchen and orphanage in Naco, Mexico.

“I’m really excited, but at the same time a little nervous and scared,” she said before the conference. “I’m sure it will be a week I’ll never forget.”

The “immersion” aspect appealed to her, she said. “I definitely prefer those than just sitting and listening to talk.”

Bardelmeier’s first immersion experience was at the 2010 UNCSW. “I met women from all over the world, struggling with so much.” She recalled meeting a woman from Turkey who was kicked out of university for wearing a hijab. “She couldn’t be educated because of her faith. It was those kind of conversations that just punctuated the entire week. It was very powerful.”

“I think the enduring impact has been the connections I made with other women in the Episcopal Church throughout the country,” she said. “Ultimately, that’s why I applied for another one.”

“What inspired me to apply to this particular conference is that my brother-in-law is a refugee from Cambodia,” she added. “The Christian Reform Church brought him over and resettled him in my hometown. I feel like that’s now part of my story in a way.”

“I think the Episcopal Church is kind of leading the way with migration ministries,” she said. “I want to learn more.”