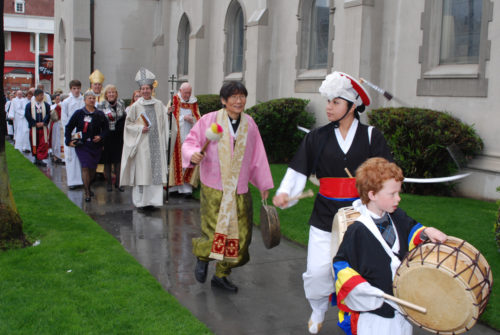 The Rev. Dr. Paul Kowalewski, St. James’ rector, said he had joked with Presiding Bishop Katharine Jefferts Schori , who was preacher and celebrant, that “we all know it never rains in Southern California, so she assured me it was holy water, indeed.

“So we are blessed with God’s holy water for the next hundred years,” he said amid laughter.

“Today’s celebration is about a century long conversation between God and God’s people in this place,” the presiding bishop told the congregation during her sermon (full text here). “God planted an invitation in the heart of Bishop [Joseph Horsfall] Johnson (the diocese’s first bishop), a newly minted priest named Noel Porter (the first rector), and a small band of disciples in this city of angels.

“It is just possible that the diversity of St. James today has some roots in Porter’s history, for he was born in India to an English father and a mother from the West Indies. He did go to USC, which was enough to make this immigrant an honorary Californian and an Angeleno – and the tradition of welcome into this community continues!”

The congregation’s rich diversity was evident in the multi-language liturgy and music. Scripture lessons were read in Korean, English and Igbo, a Nigerian language.

The Korean Drumming Ensemble led the procession out of the church to the St. James School next door where Jefferts Schori blessed two new classrooms, and into the reception, beneath tents pitched on the church grounds.

Inside the tents, the flags of 25 nations-including countries in Africa, Asia, Europe, and the Caribbean-represented the rich ethnic diversity of the congregation, which averages about 500 in attendance on any given Sunday.

The church’s 35-member youth choir and 37-voice choir performed under the direction of James Buonemani, organist and music director.

Also in attendance were Bishop Suheil Dawani of Jerusalem and the Middle East, and Los Angeles bishops Jon Bruno and Mary Glasspool.

“This congregation has been much favored in its history, growing and thriving over its first several decades,” the presiding bishop said in her sermon. “And then some other angels came into this community and began to stir things up with surprising words and deeds. Friendship with St. Mary’s Mariposa invited a conversation that endured through the evils of wartime internment and disrespect for human dignity.

“Nat King Cole seems to have been a particularly beloved angel in this place, inviting this favored community to look around and see what it might become,” she said. “That invitation has continued, with schools for children, meals for the hungry, and a table open to all God’s favored and beloved people, from many families, languages, tribes, and nations.  You have responded to the surprising challenges your visitors have brought by growing in your ability and responsiveness, to serve all sorts and conditions of people, here and across the world.”

Cole was a parishioner of St. James’, the site of his funeral in 1965.

In other history, five of the parish’s nine rectors have become bishops: Porter, of Northern California; George Barrett of Rochester; Ivol Curtis of Olympia (and suffragan of Los Angeles); Robert Terwilliger, suffragan of Dallas; and Kirk Smith of Arizona.

Another former rector, the Rev. Canon Samuel D’Amico, received a standing ovation and thunderous applause when Kowalewski told the gathering that D’Amico had built the school during his 16-year tenure as rector (1963-1979). 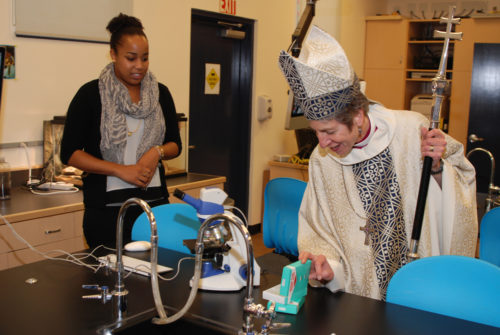 Presiding Bishop Katharine Jefferts Schori investigates a newly renovated science classroom at St. James’ Episcopal School, a ministry of St. James’ Church, for which she celebrated a centennial Eucharist on March 25. The presiding bishop, who holds a doctorate in oceanography, offered a blessing for two classrooms at the school.

The school, which includes preschool through sixth grade, has about 440 students.

Kowalewski presented Dawani with funds to offer two scholarships to students through Educate for Hope, a program started by Mary Bruno in Zababdeh.

He also presented the presiding bishop with a $1,000 donation in her honor to the diocese’s Nets for Life campaign, a program through Episcopal Relief & Development that helps prevent malaria with pesticide-treated nets.

The reception included a jazz trio and a huge anniversary cake. The gathering also sang “Happy Birthday” to the presiding bishop a day early, and Kowalewski presented to her a birthday greeting proclamation from Los Angeles Mayor Antonio Villaraigosa.

Kowalewski said the church’s focus for the next century is evident in its nickname, “St. James in-the-City.”

“The main focus is how can we interact more carefully with this community, which is an extremely diverse neighborhood, from Hancock Park to people who are homeless and all kinds of different cultures,” he said. “We have a huge Latino population next to us. We’re branching out to figure out how we can be in ministry to the city. That’s a real emphasis for the next couple of years here, to be more in relationship.”