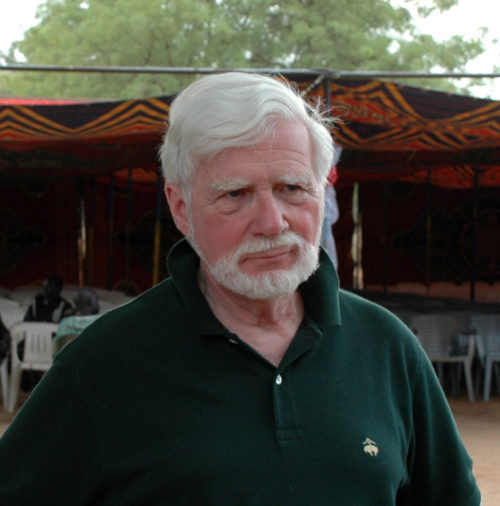 Richard Parkins is executive director of the American Friends of the Episcopal Church of Sudan. Photo/Matthew Davies

[Episcopal News Service] With hardly a chance to bask in the jubilation that accompanied the July 2011 creation of the Republic of South Sudan, the advocacy community was called into action to protest the military actions of the National Congress Party (NCP) and the government of Sudanese president Omar al-Bashir in violating the terms of the 2005 Comprehensive Peace Agreement (CPA).

The CPA provided for the residents of Abyei to determine their future through a separate referendum, and the Blue Nile and the Nuba Mountains to have their status determined by a process described as “popular consultation.” Khartoum invaded Abyei and displaced thousands who have since had their hopes dashed, finding themselves in an even more precarious situation. Within months the NCP’s war machine rained bombs on South Kordofan and the Nuba Mountains followed by aggressive military action against the Blue Nile.

Often a major impediment to convincing advocacy is a lack of access to documentary evidence, in this case the victims of a massive assault by the Khartoum regime. The efforts of the Episcopal Church and the American Friends of the Episcopal Church of Sudan (AFRECS) were aided immensely by the presence of several Sudanese bishops who at various times spoke powerfully to the plight of their people.

The bishop of Abyei, Abraham Nhial, and the bishop of Kadugli/South Kordofan, Andudu Adam Elnail, presented at the AFRECS 2011 conference a graphic depiction of the fate that had befallen their people as a result of the reign of terror inflicted by the Bashir government. AFRECS’ ability to introduce these church leaders as authoritative witnesses to members of Congress and key administration officials such as the Special Envoy to Sudan and the Assistant Secretary for Africa allowed the voices of victims to be heard through the pleas of their leaders.

A concern for many as Sudan became two nations was the plight of Christians in the north, where it was expected that a more severe form of Islam would take hold. These fears were fomented by strident voices in Khartoum speaking of a country that was committed to a single culture that would offer little accommodation to other religions, languages, or traditions.

AFRECS and the Episcopal Church were informed in their advocacy by two visits to the United States by Bishop Ezekiel Kondo of the Episcopal diocese of Khartoum. This articulate and compelling spokesperson for a major swath of Sudan’s Christians was for U.S. policy makers and advocacy groups one of the few indigenous voices for Khartoum’s Christians with whom they were able to have a face-to-face encounter. The bishop’s description of discrimination against Christians and the harassment that churches were experiencing gave clear signals of the difficulties that were emerging as Sudan felt emboldened in moving forward with policies designed by its more radical Islamists.

To be effective, advocacy must be timely so that any proposed intervention can occur in sufficient time to make a difference. In dealing with Sudan, deadlines are invariably unreasonable and hostile to South Sudanese, thus urgent action becomes a standard requirement if lives are to be saved. For example, advocates are pressing for an extension of an April 8 deadline – the time by which South Sudanese must meet Sudan’s difficult citizenship requirements if they are not to be disenfranchised. If the extension does not happen, more than 500,000 people could find themselves stateless. The consequences are particularly devastating since the 24,000 persons who have been registered by the United Nations High Commissioner for Refugees as prospective returnees may be impacted by the cutoff. At present, these persons are unable to leave Sudan either because they lack a means of departing or face a blockade on their movement south by the Sudanese government. To be disenfranchised in a place where the government resents your presence and to be without protection produces untold panic and fear.

Many members of the AFRECS network and the Episcopal Public Policy Network help to sustain advocacy as issues and causes demand. The eight U.S. dioceses that have partnership and companion connections with dioceses of the Episcopal Church of Sudan help to carry forth to congressional offices and the administration the message that there is a faith community that cares deeply about the fate of their Sudanese sisters and brothers. It is this grassroots constituency that provides whatever leverage the Episcopal Church has as it presses public policy-makers to act. Now a weekly AFRECS e-blast makes certain that interested Episcopalians have current news about developments in Sudan, particularly those involving the church either as actor or victim.

The Episcopal Church has for several years given primacy to peace in Sudan as a justice concern and has introduced resolutions which frame its advocacy agenda. A major resolution was introduced at the 2009 General Convention that set the stage for the advocacy done around the January 2011 referendum. With the escalating violence occurring in Abyei and the Nuba Mountains, another resolution that advocated for stronger U.S. leadership in enabling aid agencies access to the war-ravaged regions of the north was delivered by Presiding Bishop Katharine Jefferts Schori to AFRECS at its 2011 conference. The resolution was reaffirmed by the Episcopal Church’s Executive Council at its February 2012 meeting. These resolutions arm advocates with the backing that allows them to speak authoritatively for a couple of million Episcopalians. The resolutions are shared with those on whose doors we knock as we press for action on behalf of suffering Sudanese.

The work that the church does is most often done in collaboration with like-minded religious and non-sectarian human rights organizations. For example, interfaith work has been instrumental in allowing the larger faith community to speak forcefully to the government to urge more robust action in ending the embargo on assistance reaching Sudanese now at grave risk because of Khartoum’s intransigence in allowing relief to those whom it continues to attack. It is the solidarity among a broad spectrum of organizations and religious bodies, including leaders within the diaspora community, which gives significant energy to our advocacy. This was evidenced most recently with the array of voices that appeared this past Friday in front of the Sudanese Embassy in Washington, D.C., to protest the use of food as a weapon against the people of the Nuba Mountains.

Reflecting on the several years of advocacy carried about by the Episcopal Church and AFRECS, credit can be claimed for success as the cumulative impact of this work combined with that of many stalwart colleagues helped create pressure for a peaceful referendum. It is hoped that these persistent voices will add pressure to preventing the starvation of thousands and bringing an end to a conflict that is writing another tragic page of suffering and displacement for thousands of Sudanese.

Even when results are slow in coming or may seem to produce modest results, advocacy must be viewed as a means of extending ourselves as faithful Christians to those who need to know that they are not alone and not abandoned in their quest for justice and peace. Advocacy is a way of expressing solidarity and accompaniment with those who desperately need it.

— Richard Parkins is executive director of the American Friends of the Episcopal Church of Sudan.