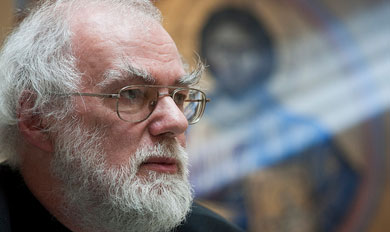 Archbishop of Canterbury Rowan Williams during a July 2011 conference at Lambeth Palace. Photo/Marcin Mazur from the archbishop’s official website

[Anglican Communion and Episcopal news services] Archbishop of Canterbury Rowan Williams on March 16 revealed that he is to step down from his role at the end of the year.

His decision comes after 10 years in the post and after accepting the position of Master of Magdalene College, Cambridge. The college said that Williams “has the capacity and vision to guide the College in a time of unprecedented change in higher education.”

In a statement issued from Lambeth Palace, the Primate of All England said: “It has been an immense privilege to serve as Archbishop of Canterbury over the past decade, and moving on has not been an easy decision. During the time remaining there is much to do, and I ask your prayers and support in this period and beyond.

“I am abidingly grateful to all those friends and colleagues who have so generously supported Jane and myself in these years, and all the many diverse parishes and communities in the Church of England and the wider Anglican Communion that have brought vision, hope and excitement to my own ministry. I look forward, with that same support and inspiration, to continuing to serve the Church’s mission and witness as best I can in the years ahead.”

Williams’ term has been marked by increased tension over the full inclusion of lesbian, gay, bisexual and transgendered people in the life of the church, the ordination of women and overarching questions of biblical authority and orthodoxy. During an interview with the Press Association after his announcement, Williams said that “the worst aspects of the job, I think, have been the sense that there are some conflicts that won’t go away, however long you struggle with them.”

Following the announcement, Presiding Bishop Katharine Jefferts Schori issued a statement from Camp Allen in Texas, where the spring meeting of the Episcopal Church’s House of Bishops is getting underway.

“I am grateful for Rowan Williams’ service as archbishop of Canterbury during an exceedingly challenging season. We can all give thanks for his erudition and persistence in seeking reconciliation across a rapidly changing Anglican Communion,” she said.

“His leadership of that reconciling work through indaba and ubuntu is bearing remarkable fruit, and I believe this will be his most important legacy. I give thanks that his spiritual and intellectual gifts will continue to bless the larger world, albeit from a different vantage point. May the coming months bring well-deserved peace to him and his family, and may we join in blessing his ministry. ‘Well done, good and faithful servant!'”

House of Deputies President Bonnie Anderson called Williams “a kind and generous man, who faced an overwhelming challenge in attempting to hold the Anglican Communion together during these tumultuous years.

“Though I was frequently disappointed at the cost he expected lesbian, gay, bisexual and transgender Christians to pay on behalf of the wider Communion, I was deeply impressed by his keen intellect, his pastoral manner and his fidelity to God’s mission as he perceived it,” she continued. “He is an excellent teacher, and a gifted writer, and I am sure that he will once again make a brilliant mark in academia. I sincerely wish this gentle spirit Godspeed.”

The Archbishop is the focus of unity for the Anglican Communion. He is convener and host of the Lambeth Conference, President of the Anglican Consultative Council (ACC), and Chair of the Primates’ meeting. In these roles he travels extensively throughout the Anglican Communion, visiting provinces and dioceses, and supporting and encouraging the witness of the Church in very diverse contexts. As primus inter pares (first among equals) among the bishops, he has a special concern for those in episcopal ministry.

Following the announcement, the Rev. Canon Kenneth Kearon, secretary general of the Anglican Communion, wrote to members of the Standing Committee informing them of the decision.

He asked them to remember Williams and his family during this time of transition and reflected on the primate’s time in office saying it had “coincided with a period of turmoil, change and development in the Anglican Communion, and his careful leadership, deeply rooted in spirituality and theology, has strengthened and inspired us all in the Communion during this time.”

Williams’ announcement means that the Anglican Consultative Council meeting in New Zealand during the last quarter of this year will be his last as its president.

Archbishop of York John Sentamu said he was saddened to hear the news: “Our partnership in the gospel over the past six years has been the most creative period of my ministry. It has been life-giving to have led missions together, gone on retreats and prayed together. In his company I have drunk deeply from the wells of God’s mercy and love and it has all been joyful. He is a real brother to me in Christ.

“The last decade has been a challenging time for the Church of England and the Anglican Communion. Thankfully, Archbishop Rowan is a remarkable and gifted leader who has strengthened the bonds of affection.”

Other officials and observers soon added their reactions as well.

Anglican Church of Canada Archbishop Fred Hiltz was traveling to Melanesia at the time of the announcement and was inaccessible for comment, according to a press release. Archdeacon Paul Feheley, his principal secretary, said that Williams’ term in office was “a time of significant challenges,” during which Canadian Anglicans “benefited from his thoughtful, pastoral presence.”

The Rev. Dr. Francis H. Wade, interim dean of Washington National Cathedral, said in a statement that Williams “has been a steadfast and compassionate leader during two decades in ministry as a bishop — half of them as the central figure in our Anglican Communion.”

IntegrityUSA President Caroline Hall called the decade of Williams’ service “the most tumultuous time for Anglicans since the end of the English Civil War” and said that it was an “incredibly difficult time” in which to be a symbol of unity “in an Anglican Communion struggling with disunity and at times outright hostility.”

“When he was elected we had high hopes that Rowan Williams would be willing to take a bold stand on LGBT inclusion,” Hall said, adding that “those hopes were dashed almost immediately” because “in his attempts to keep everyone at the table, Williams has proved more willing to listen to conservative than to liberal voices, even though his own theological position is more progressive.”

The Rev. Dr. Olav Fykse Tveit, World Council of Churches general secretary, said Williams’ “strong commitment to the unity of the church and the common work for justice and peace remains steadfast and part of his ongoing ministry.”

The No Anglican Covenant Coalition thanked Williams “for his tireless commitment to unity in the Anglican Communion across these difficult ten years. We share with him hope that we will achieve greater love towards one another in the Communion and that we might be enriched by our links across the world.”

The BBC posted a round-up of reaction here.

For the official release from Lambeth Palace and more information about Williams’ time in office visit here.

Prime Minister David Cameron thanked Williams for his service, saying he “sought to unite different communities and offer a profoundly humane sense of moral leadership that was respected by people of all faiths and none.” Cameron made no comment on the process to select Williams’ successor

When Williams was appointed in July 2002, the Crown Appointments Commission was charged in a very secret procedure to send two names to the prime minister who could then either return the names to the commission and ask them to make new choices or forward a single choice to Queen Elizabeth. The queen makes the formal announcement.

Speculation, begun even before Williams was earlier rumored to be contemplating his departure, renewed with the announcement. Even Williams, speaking during the Press Association interview, had some thoughts on the question.

“I’d like the successor that God would like. I think it’s a job of immense demands and I would hope that my successor has the constitution of an ox and the skin of a rhinoceros really,” he said. “He will, I think, have to look with positive, hopeful eyes on a church which, for all its problems, is still for so many people a place to which they resort in times of need and crisis, a place to which they look for inspiration and I think the Church of England is a great treasure. I wish my successor well in the stewardship of it.”