Pope Benedict XVI and Archbishop of Canterbury Williams prayed together and lit candles in the chapel of St. Gregory following a March 10 service at San Gregorio Magna al Celio in Rome to mark the 1000th anniversary of the founding of Italy's Camaldoli monastic community. Photo/Matthew Davies

[Episcopal News Service] Anglicans and Roman Catholics share a somewhat turbulent history, but differences were brushed aside March 10 when Archbishop of Canterbury Rowan Williams and Pope Benedict XVI prayed together during an ecumenical vespers service at San Gregorio Magna al Celio in Rome.

The service marked the 1000th anniversary of the founding of Italy’s Camaldoli monastic community, which includes a presence at San Gregorio, a site of major significance to the origins of the Church of England.

Both Christian leaders, who held a private meeting earlier in the day to discuss human rights issues and concerns for the Holy Land, delivered a homily during the vespers and lit candles together in the chapel of St. Gregory.

Echoing the words of his two predecessors, Williams described the relationship between the Anglican Communion and the Roman Catholic Church as “certain yet imperfect” during a sermon that extolled St. Gregory’s virtues of humility and prophecy.

“‘Certain’ because of the shared ecclesial vision to which both our communions are committed … a vision of the restoration of full sacramental communion,” he said. “And ‘yet imperfect’ because of the limit of our vision, a deficit in the depth of our hope and patience.” [The full text of the archbishop’s homily is available here.]

The pope, according to a Vatican Radio translation of his address, which was delivered in Italian, expressed hope that “the sign of our presence here together in front of the holy altar, where Gregory himself celebrated the eucharistic sacrifice, will remain not only as a reminder of our fraternal encounter, but also as a stimulus for all the faithful – both Catholic and Anglican – encouraging them … to renew their commitment to pray constantly and to work for unity. …” [The full text of the pope’s homily is available here.]

Bishop Pierre Whalon of the Convocation of Episcopal Churches in Europe participated in the service. He told ENS that the event “means that the ecumenical movement is not dead. For some years, it has been frozen, as the major partners have had to deal with serious issues in their own churches. But these meetings keep showing that things are different now and we will not go back to the bad old days. That encourages cooperation at the grassroots level, which is where the church really happens.”

The church is built on the site from which St. Gregory the Great, in the 6th century, sent St. Augustine, first archbishop of Canterbury, along with 30 monks to re-evangelize England. They landed in 597 and are credited with laying the foundations for the renewal of English Christianity.

The March 10 vespers marks the third time in recent history that a pope and an archbishop of Canterbury have worshiped together at San Gregorio. (Pope John Paul II prayed at the church with Archbishop Robert Runcie in 1989 and again with Archbishop George Carey in 1996.)

“This archbishop of Canterbury has made far more trips to Rome than any of his predecessors,” said Whalon, adding that the two leaders share a personal relationship and are “top theologians in their respective churches.”

Throughout the weekend, Williams also preached and presided during a March 11 service of Holy Eucharist at St. Paul’s Within the Walls, an Episcopal Church parish and the first non-Roman Catholic church to be built inside the walls of Rome. The St. Paul’s congregation was joined by members of All Saints Anglican Church in Rome, a parish in the Church of England’s Diocese in Europe.

A video of the archbishop’s sermon is here.

Whalon said he loaned Williams his crozier for the service as a sign of the Episcopal Church’s hospitality.

Following the service, Williams told ENS that the Anglican and Episcopal churches’ presence in Rome is “a reminder to our Roman Catholic friends that we are a worldwide communion, and look at the international character of the congregation here this morning and you see that the point is made.”

The relationship between the Anglican Communion and the Roman Catholic Church has been strained in recent years due to differences concerning women’s ordination and the Vatican’s efforts to offer a spiritual home to former and disaffected Anglicans while enabling them to retain aspects of their liturgy and traditions. The provisions are made through a “Personal Ordinariate,” a geographic region similar to a diocese yet typically national in scope.

The first ordinariate was formed for England and Wales in January 2011 and plans are still being finalized to set up ordinariates for Australia and Canada.

Most recently, an ordinariate was formed on Jan. 1, 2012 in the United States to welcome former Episcopal parishes and priests – including married priests – seeking to enter the Roman Catholic Church. Jeffrey Steenson, the former bishop of the Episcopal Diocese of the Rio Grande, was named as its first “ordinary.”

Whalon told ENS that the way the arrangement initially had been decided and announced by the Vatican in November 2009 “was insulting to us” but he noted that Episcopal Church Presiding Bishop Katharine Jefferts Schori was made aware by the Roman Catholics that Steenson would be named in charge of the ordinariate in America.

“The advance notice given seems to be a new awareness that ecumenical relations matter,” Whalon said. “In any event, as the arrangement does not have an ecclesiological basis, but is really a pastoral gesture, it will not last more than a decade or two.”

Mary Reath, a lay Episcopalian from the Diocese of Jersey and a member of the governing board for the Anglican Centre in Rome, told ENS via e-mail from her Princeton home that while it is “a time of exceptional challenge for both Anglican and Roman Catholic leaders … theological reconciliation in the past 40 years has actually been especially fruitful. It naturally moves us toward more concrete questions of co-existence and cooperation.”

The Anglican Centre in Rome houses an extensive library, serves as an ecumenical meeting place and educational center, and includes the offices of the Archbishop of Canterbury’s diplomatic representative to the Vatican, the Rev. Canon David Richardson, who accompanied Williams throughout his visit.

“Does anyone deny that if there were more coordination between two of the world’s most global, organized and influential church bodies, that the word’s poor, and poor in spirit, would not be better served?” asked Reath, who authored Rome and Canterbury: The Elusive Search for Unity (2007). “The time is ripe for human and practical ecumenism.” 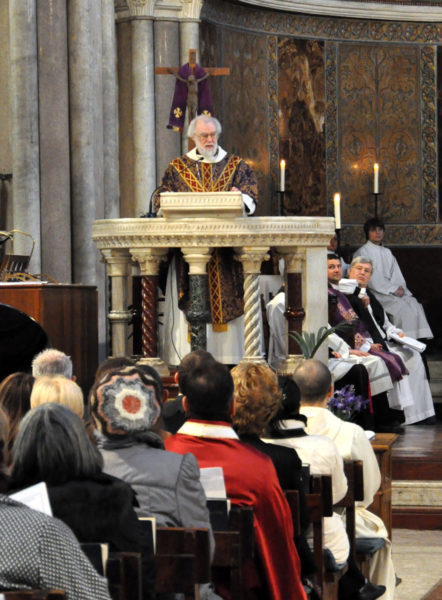 Archbishop of Canterbury Rowan Williams delivers a sermon March 11 at St. Paul's Within the Walls Episcopal Church during a service for Anglicans and Episcopalians in Rome, as Bishop Pierre Whalon of the Convocation of Episcopal Churches in Europe and the Rev. Austin Rios, St. Paul's rector, listen. Photo/Matthew Davies

A third phase of the Anglican-Roman Catholic International Commission (ARCIC) is currently underway, grappling with questions concerning the church as communion, local and universal, and how the church comes to discern right ethical teaching. ARCIC is an ecumenical dialogue between the two churches that was established in 1967.

In the U.S., the Anglican-Roman Catholic dialogue (ARCUSA), of which Reath is a member, has been meeting regularly since the 1960s, making it the Episcopal Church’s oldest dialogue relationship. Its most recent meeting Feb. 27-28 was hosted by the Episcopal Church Center in New York.

The Rev. Margaret Rose, the Episcopal Church’s deputy for ecumenical and interreligious relations, told ENS that the work of ARCUSA, “as with other dialogues … emphasizes the desire to share work in mission and shalom that helps to put both life and work, faith and order in perspective.”

“The sharing of worship space and the altar and our fellowship during the meeting, as well as the frank conversations, are a mark of our desire for unity and our friendship, even as we are aware that we do not have a common sharing of the Eucharist,” Rose told ENS.

Episcopal Diocese of Tennessee Bishop John Bauerschmidt, co-chair of ARCUSA, told ENS that the Episcopal Church’s “grassroots relationships with Roman Catholic neighbors, friends, and family members makes this dialogue more than a theoretical matter … The members of the dialogue are discovering agreement in substantial matters as well as some familiar differences in both ecclesiology and moral issues. ”

Bauerschmidt said that prayer together “is a significant marker of the fellowship that Christians share, and itself furthers the union we are called to.”

He described the weekend’s events in Rome as “a cause for rejoicing.”

Later on March 11, Williams teamed up with Fr. Robert Hale, prior of the New Camaldoli Hermitage in Big Sur, California, to present a conference on “Monastic Virtues and Ecumenical Hopes.” [The full text of the archbishop’s address is available here.]

Concluding hia visit to Rome, on March 12 the archbishop is visiting the monastic community at the Abbey of Montecassino, founded by St. Benedict around 529, where he will attend vespers and deliver an address on “Monks and Mission: a perspective from England.”

Summing up the relations between the two global churches, Williams told ENS: “We’re working together for the kingdom, we’re praying together, and of course we have a huge agenda institutionally, which we’ve no idea how to sort out, but meanwhile we go on working and praying in great affection.”

— Matthew Davies is editor/reporter of the Episcopal News Service.