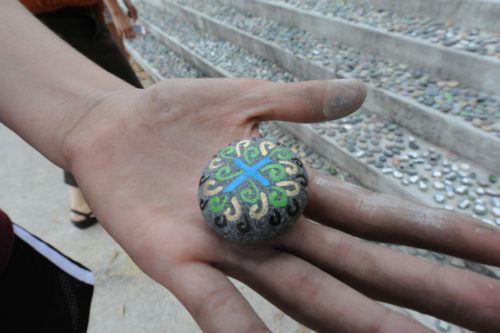 [Episcopal News Service] While students at Episcopal School of Jacksonville, Florida, gathered March 8 to paint river rocks to help them grieve the murder of Head of School Dale Regan two days earlier, details began to emerge about the former teacher who shot her and then killed himself.

Regan often spoke to students at the grade 6-12 school about river rocks as a metaphor for steps along the path of life. The 3,000 stones will be distributed at a “Celebration Memorial Service” planned for March 9 on campus. The students met on the campus Flag Plaza to paint the stones and carefully array them on the steps of the plaza.

Regan, 63, died in the early afternoon March 6, a few hours after she had been involved in firing Shane Schumerth, 28, a Spanish teacher at the school. He returned to campus with an AK-47 in a guitar case, went to her office and shot Regan several times before killing himself, according to the Jacksonville Sheriff’s office.

Regan had been at Episcopal for 34 years, teaching English before she became head of school.

The school said in a statement that Schumerth was “failing to meet the expectations of the school and was repeatedly counseled for issues associated with attendance and a lack of timeliness in complying with the requirements of the position.”

The “separation meeting,” the statement said, was held away from students and with a witness.

“The employee was informed of the decision to separate in the most compassionate way possible and was offered separation pay,” the statement continued.

The Very Rev. Kate Moorehead, dean of St. John’s Episcopal Cathedral in Jacksonville and vice-chair of the school’s board of trustees, said in the statement that Regan “dearly loved her faculty. She was always intent on not only addressing a situation legally, but in ensuring that we considered the personal impact on the employee. She lived her faith in the way that she led the school.”

Schumerth made no threat during the meeting but the school followed its standard practice of escorting him off the campus and informing the security force, which placed a guard at the entrance of the school, according to the statement.

Three roads lead to the school and some have gates, according to the Jacksonvile Florida Times-Union newspaper. The school, which has a full time director of safety and security, uses video surveillance and security gates as well as a digital patrol check system that ensures patrols are completed, the school said in its statement.

Meanwhile, the newspaper reported that Schumerth brought with him nearly 100 rounds of ammunition for an AK-47 assault rifle he purchased at a Jacksonville gun show early last month. The newspaper attributed the information to an unnamed police source familiar with the investigation.

In the semi-automatic version of the rifle a 7.62mm bullet out of a chamber is typically fed from a 30-round clip attached to the bottom of the rifle. Officials said that an AK-47 was a fairly common military weapon and that civilian models can be purchased in gun shops for $400-$500.

It’s unlikely anyone will ever know why Shane Schumerth chose Regan as his only target, shooting her as many as 10 times before killing himself, the newspaper’s source said. Investigators have yet to find a note or other indication as to Schumerth’s motive, said the source, who the newspaper said not been authorized to speak publicly about the case.

The campus is closed until March 19, in part because spring break had previously been scheduled for the week of March 12. School officials have been providing grief counseling on campus and meetings between students and teachers.

Jane Goodwin, whose daughter Casey is in seventh grade, told the Times-Union that the school’s response to the tragedy has reinforced that Episcopal is a good place for Casey.

“They kept us updated, and all kinds of faculty have been available to help our kids,” Goodwin said. “It is shocking, but I have no reservations about how it was handled.”

Students, parents, alumni and friends of Regan and the school, as well as school officials from all over the country, are leaving condolences on the school’s blog as well as on its Facebook page and elsewhere.

“The faculty and students of the Fountain Valley School of Colorado join with their colleagues and peers at Episcopal School and across the nation to mourn this terrible loss of life and leadership. May you find strength together as you celebrate Dale’s life and carry on her good work,” Fountain Valley School of Colorado Headmaster Craig W. Larimer wrote on the school’s blog.

Barbara Hodge, executive director of the Florida Council of Independent Schools, in a message to heads of schools in the council, wrote that Regan, who was president of the group, “would have reached out to comfort, to support, to lift up, and to unify the community” in such a situation. Hodges urged FCIS members to “follow the model that Dale beautifully unfolded for us.” She also called for a moment of silence at 11 a.m. EST March 9 as the memorial service at Episcopal begins.

Elizabeth Bell Canon called Regan “the person who saw more in me than I saw in myself.”

“Because of her, I began to believe that I was capable of mastering truly challenging tasks related to writing and language,” she wrote on the blog. “I ultimately chose a path that led me to become a teacher – and that would not have been doable without her influence at a critical point in my life. Thank you, Mrs. Regan. I promise that I will spend the rest of my professional life trying to live up to the example you set for me when I was a 17 year old girl.”

A Times-Union columnist, Mark Woods, wrote March 8 about a Dec. 2010 email Regan sent him after he had written about some Episcopal parents who filed a lawsuit after the school lost a football playoff game. Regan and the school made it clear they wanted no part of the suit and had told the parents and their employees just that.

“As you can imagine this has not been the best week for me or our school,” Regan wrote in the email that Woods said were now chilling, powerful and poignant. “No school head would be proud to have their school on the front pages as ours has been this week. But, I really want to thank you for your article. Again, I wish an Episcopal parent and employee weren’t part of your subject, but rightfully they were. And your message was excellent.”

Regan went on to say that “children are precious and important, but parenting needs to be patient, level-headed, loving and long-ranged rather than a ‘let me see what I can do to make everything all right for you,'” she wrote, adding that parents, educators and coaches have to be partners in “teach[ing] life lessons that sometimes are difficult.”