Editor’s note: This is the first in a series of articles ENS is publishing during Women’s History Month. 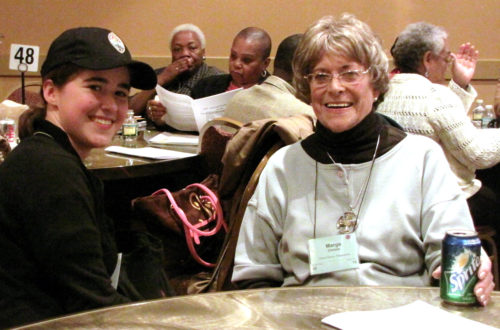 Marge Christie and her granddaughter, Caroline Christie, at the Episcopal Diocese of Newark's annual convention in January. In July, they will attend General Convention together, Caroline as a first-time deputy and Marge as first alternate in her 13th trip to the triennial meeting as a deputy or alternate. Photo/Sharon Sheridan

[Episcopal News Service] The two best decisions she ever made, says Marge Christie, were accepting her husband George’s marriage proposal and joining the Episcopal Church.

The two decisions were, in fact, related. After they met in high school, she said, “I used to go to church with him because, guess what? I had an extra day with him.”

They married in 1950 and raised four children before he died in 1995. Early on, she attended an inquirer’s class at the local Episcopal church and was confirmed. Soon she joined the church women’s group and embarked on a lifetime of service and leadership, spanning the days before women could serve even as convention deputies to today, when the presiding bishop and president of the House of Deputies both are women.

Throughout, her love of the church never dimmed.

“I’ve had a challenging and an interesting and a spectacular time,” said Christie, who turns 84 in May.

And she’s not done yet. In July, she will return to General Convention for her 13th stint as a deputy or alternate at the Episcopal Church’s triennial legislative meeting. She’ll serve as first alternate for the Diocese of Newark beside her granddaughter, Caroline Christie, elected deputy at age 17. Meanwhile, the two just spent a week as roommates as part of an Anglican women’s delegation to the annual United Nations Commission on the Status of Women in New York.

Christie’s service in the church started with the women’s group at St. Matthew’s in Paramus, New Jersey. “Before I knew it, I was president.”

She began attending district and diocesan meetings. At the first annual diocesan Episcopal Church Women‘s meeting she attended in the mid-1960s, the cathedral “was packed with women, standing room only,” she said. “That was the only place [in the church] that women really could function in those years.”

She was elected. She vividly recalls walking into her first meeting. “It was all men, and they were smoking cigars.”

“That was kind of my launching pad in the diocese,” she said.

She later became one of the first female deputies seated at diocesan convention. And when George Rath, who served as suffragan and then diocesan bishop, was on the nominating committee for a Province II representative to Executive Council, Christie asked why she hadn’t been nominated. He called for a second round of nominations. “I was elected.”

Few women served at that time, she said. “It was sort of like carving a new path.”

In 1970 and 1973, Christie served as diocesan representative to the ECW’s triennial meeting. In a 2009 interview at General Convention, she recalled being an ECW delegate in 1970 when women first were seated as convention deputies. “We recessed and went in the gallery and watched the original 24 women who were seated” after the convention approved allowing women to serve.

In July 1974, Christie was vacationing with her family on Long Beach Island when she read a front-page article in The New York Times saying some women were going to be ordained as priests in Philadelphia. She assumed Rath would be among the consecrators and wrote him a congratulatory letter. He wrote back explaining that he would not participate because he was waiting for the church to make a legislative decision permitting women’s ordination to the priesthood.

“For me, that was a disappointment,” she said. “You do have to be a pioneer sometimes and take some risks.”

Before going to Nairobi for the 1985 worldwide conference that brought the U.N. Decade of Women to a close, members of the Episcopal Church's delegation to the parallel non-governmental conference held a series of hearings around the country to brief Church leaders--women and men--on the Conference goals and to solicit a wide variety of opinion and vision that they will take to the gathering. During the hearing in New York, delegates Marcia Newcombe and Ann Smith of the Episcopal Church Center staff, Marge Christie of the Executive Council of the Episcopal Church and Eleanor Hall of the Diocese of Olympia enjoy an anecdote offered by a member of their audience. Photo/Episcopal News Service

Christie attended the “irregular” Philadelphia ordination of 11 women as priests. Four more women were ordained in Washington, D.C., in 1975. Then, in 1976, Christie served as a deputy as General Convention formally approved women’s ordination.

“I also was at the service in Boston [in 1989] when Barbara Harris was consecrated bishop, and that was another absolutely moving moment in my political, but certainly in my spiritual, life,” Christie said. “A woman as a bishop was, I think, even more earthshaking for people. … Barbara Harris was absolutely the right person because she took a lot of guff, and she was the kind of person who could take it. She didn’t let it get to her.”

Christie was among the first members of the Episcopal Women’s Caucus, initially formed to lobby for women’s ordination. At the invitation of Joe Leidy at the Episcopal Church of the Redeemer in Morristown, New Jersey, she also became involved with Coalition E, a political action group forming around justice issues coming before General Convention that was the predecessor of today’s Consultation. “There’s not a single woman among them,” he told her, “so I want to bring you with me.”

While women through the years have been pioneers in breaking the mold of leadership roles in the church, Christie noted, “they broke the mold with lots of help from lots of men who believed that it should happen as well.”

Joining Coalition E “kind of got me started on that level” of church involvement, she said. “Lots of doors opened, but there are people that are holding the door ajar for you so you can get through, and Joe Leidy was one of those for me.”

Another door opened about a decade ago, when the then-Anglican observer to the United Nations, Taimalelagi Matalavea, had to go to England during the UNCSW in New York. Christie agreed to attend. “I didn’t know anybody, but I found my way bit by bit. Then, afterwards, I met with Tai and Phoebe Griswold and said, ‘This is ridiculous. We need a bunch of women there. I can’t represent the whole Anglican Communion.'”

That led to the 2003 formation of Anglican Women’s Empowerment, which brings together women from throughout the communion to attend the commission each year. Other groups of women attend as well, Christie said.

“We’ve found ways to work together and to support the issues and work toward betterment of life for women around the world, and that’s the bottom line. … It’s amazing. There’s no effort for there to be a top dog or one person more important than another. It’s just women, and some men, who really care and do what they can.”

Speaking by telephone March 7, on the eve of International Women’s Day, Christie reflected on the difference women’s involvement has made in the Episcopal Church.

“I do think that women bring somewhat of a different perspective to things,” she said. “They tend to be more ready to make partnerships. They are deeply concerned about the outcasts and children. That’s not to say men aren’t, but I think women are more active in that, in living out how they feel about those issues … doing whatever needs to be done in order to assure that women are welcome everywhere and that their perspectives are heard and listened to.”

“The fun that I have with the Commission on the Status of Women gatherings at the U.N.,” she added, “is meeting women who are doing the same thing in their countries now, and a chance to share with them what they’re going through and to tell them to hang tall because it will happen.”

As to her own involvement, she said, “I just love learning about the larger church, including, finally, understanding the Anglican Communion and having the chance to meet people from across the communion.”

“My major concern has always been women and girls,” she said. “But inclusion would probably be my mantra, so that you spread the net as wide as you can to get as many voices and points of view” as possible.

“That’s what I love about the Episcopal Church,” said Christie, who today attends Christ Church, Ridgewood, New Jersey. “It’s a democracy in many ways. Certainly in its business it is, and it’s really possible to make a difference.”