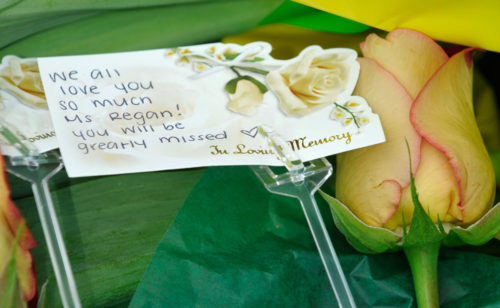 Flowers are placed at the entrance to Episcopal High School in Jacksonville, Fla. Wednesday, March 7, 2012, the day after the head of school, Dale Regan, was gunned down by a teacher who had been fired. The school will remain closed through next week’s spring break. (AP Photo/The Florida Times-Union, Will Dickey)

[Episcopal News Service] In the wake of the March 6 murder-suicide at Episcopal School of Jacksonville, Florida, officials have opened the campus to students, faculty and staff seeking counseling and comfort.

A public memorial service for slain Head of School Dale Regan is planned at 11 a.m. March 9 in the school’s Campion Courtyard between Parks and Lastinger Halls, two classroom buildings whose construction she oversaw two years ago. There will be a public viewing at a local funeral home the evening prior.

Regan, 63, died hours after she had been involved in firing Shane Schumerth, 28, a Spanish teacher at the school. He returned to campus with an AK-47 in a guitar case, went to her office and shot Regan several times before killing himself, according to the Jacksonville Sheriff’s office.

Regan had been at Episcopal for 34 years, teaching English before she became head of school.

“Dale has devoted her entire life to this school as a teacher and administrator,” said Rob Clements, chairman of the school’s board of trustees, and the Very Rev. Kate Moorehead, dean of St. John’s Episcopal Cathedral in Jacksonville and trustee vice-chair, in a statement on the school’s website.

“Without Dale’s determination and passion for students and teaching, where Parks and Lastinger Halls now stand would just be empty space. Instead, the future of Episcopal and excellence in teaching and learning stands supported by brick and white columns, but more importantly, it houses new ways of learning, technology for today’s student, and an environment that challenges teachers to be their best,” they said.

Moorehead, in a telephone interview with Episcopal News Service March 7, said that Regan “had a wonderful combination of gentleness, wisdom and fortitude; she was a very strong woman and a visionary, but also could be a counselor.”

Florida officials and citizens, many of them Episcopal alumni, immediately issued statements about the shooting and posted tributes on news websites, blogs and Twitter, as well as on the school’s Facebook page.

“She could help you before you even knew what your unique gifts were, because she did,” Doug Walker, executive director of the Diocese of Florida Foundation, who worked with Regan when he served as the school’s director of institutional advancement, told the Times-Union. 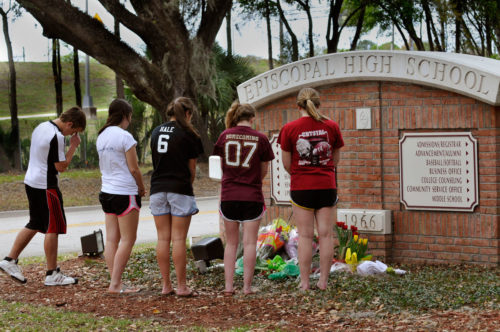 Students pray after putting flowers at the entrance to Episcopal High School in Jacksonville, Fla. Wednesday, March 7, 2012, the day after the head of school, Dale Regan, was gunned down by a teacher who had been fired. The school will remain closed through next week’s spring break. (AP Photo/The Florida Times-Union, Will Dickey)

Among a number of prayer services held in the hours after the shootings, one at the cathedral was based on Night Prayer from the New Zealand Prayer Book. “We felt as if she was somehow with us as we said those words because she used to read them herself before bedtime,” Moorehead told ENS.

Hundreds of teenagers and their parents participated. “We had a full cathedral,” Moorehead said. “Lots of candles, lots of tears.”

Schumerth was hired by Episcopal in August 2010. He graduated in 2007 from Purdue University with a B.A. in Spanish and had taught Spanish to students of all ages, including an immersion program to eighth graders, the school said at the time.

Schumerth was teaching at John E. Ford K-8 Montessori/Spanish Immersion School in Jacksonville in April 2010 when he told the Times-Union that it was important for his students to learn debating skills. “As education is concerned, this is about as valuable a thing as you’re going to see,” he said. “Critical thinking skills, the ability to evaluate complicated issues – I noticed improvement in my classes and I noticed academic improvement in all four of the kids. That was neat to see.”

The details of Schumerth’s dismissal have not been disclosed. The Florida Times-Union newspaper in Jacksonville reported that some of his students said Schumerth had recently been speaking of fascism and politics during his classes.

Joanna Horton, in whose acting classes in emotional expression Schumerth took part, told the Times-Union that the teacher “wanted to relate to people better” and “really had trouble being in his own skin,” but she did not sense any malice.

“He was desperate,” she said. “He tried everything. He just wanted to be happy.”

Moorehead called Episcopal School an “extremely safe campus; really an oasis” and a “place of peacefulness, which makes it all the more shocking for our community.”

“We expect there to be violence in certain places in our world but, there are other places that we work so hard to try ensure that they’re peaceful and even [there] there are times when we can’t avoid the brokenness of our world,” she continued.

The dean asked the entire Episcopal Church to “pray for this school that it can rise up to be even more incredible than it was before. This feels like a huge blow to us but I know that out of the darkness comes the light so we’re looking for a wonderful future.”

During a media briefing at the school a few hours after the shooting, Moorehead said that she hoped people would be able to pray for Schumerth.

“I know that people go through many stages of grief and there will be a stage at which they may not feel that they can do that and that’s to be understood,” she told ENS the next day. “Eventually for us to let go and trust that God will somehow work with his soul. We just have to leave his salvation in God’s hands and ask for our own hearts that we will be able to forgive.”

The Times-Union newspaper said it received an email from Steve Schumerth, Shane’s father, saying the family is in shock about the shooting and they “are deeply sorry this happened.”

“We are in shock and grieve for the loss of our son, and for the family, friends and acquaintances of Headmaster Dale Regan,” Steve Schumerth of Culver, Indiana, said in response to a Times-Union inquiry. “Our prayers go up for them and the entire Episcopal School family. We are deeply sorry this happened.”

His son, the oldest of five children, graduated in 2002 from Culver Academy, a private college preparatory school in Culver, where Steve Schumerth teaches in the leadership department.

Moorehead will preach during the March 9 memorial service for Regan. “This is where the church is at its best,” she said. “We are able to step into these moments of great loss and death and dying and proclaim the resurrection. I pray that God will speak through me somehow both to comfort them but also to give them the assurance of the hope of everlasting life.”

She said Regan would want that service to celebrate her life. “She was not a person who enjoyed long, drawn out liturgies of mourning,” Moorehead said. “That is not what she would want. She would want a celebration, so that’s what we intend to do.”