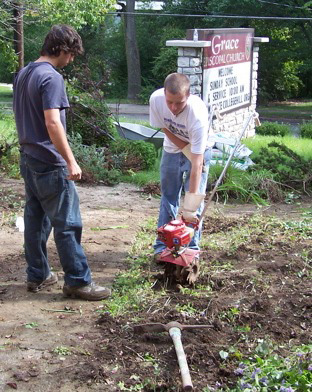 Through the Ohio Adult Parole Authority, parolees work on the grounds and facilities of Grace, College Hill, as part of a community services program.

[Episcopal News Service] For more than five years, parolees have gone each month to Grace Church, College Hill, a community in Cincinnati (Diocese of Southern Ohio) for a half day to do grounds and maintenance work.

Part of a community service program through the Ohio Adult Parole Authority, it is a mutually beneficial arrangement: the parolees get community service credit and Grace Church gets some badly needed work done. But, for all parties involved, this program has turned out to mean much more than a simple exchange.

“We heard about this program at a meeting of the College Hill Summit, a meeting of neighborhood leaders,” says parishioner Mary McLain. “The Citizens on Patrol explained that this would be an opportunity to help people come back into the community as good citizens. They explained that the parolees are mostly sex offenders. Not many organizations can or are willing to work with them, but Grace said, ‘Sure, we can do that!'”

The paroleees started with clearing brush, litter control, grass cutting, and planting flowers and bushes donated by parishioners. When winter came, the work moved inside.

“Junk got moved and stored; rooms were cleared and painted,” McLain said.

From the beginning, after the morning’s work was finished, parishioners provided the workers with a hot meal. “The guys (mostly guys) were especially appreciative of the meal,” said McLain. “Their appreciation was nice, but we thought nothing more of it until the parole officer explained that for many of them, this was the only hot, home-cooked meal they had all month.”

The parish began to build relationships with the workers.

“We cooked more food,” McLain said. “We made sure they could take leftovers with them. We sat and ate together and learned their names. The food provided a common topic of conversation, of what our mothers and grandmothers made for us. They talked of the meals they were able to concoct from canteen offerings and share on the inside. They began to lead the prayers before the meal.”

Parishioners soon learned what chores the parolees did and did not like to do, finding that they were particularly proud of seeing flowers they had planted come up the next year. One worker took photos to show off to his friends.

“When we needed a Sunday school room painted before the program year began, they worked liked beavers to get it done and wanted to know how the kids liked it,” said McLain. “They have stayed beyond their three hours to finish cutting the grass.”

Unexpected talents emerged, she said; one worker fixed the hinges on a donated piano, repaired a faulty valve on the boiler, and built a new base for a water-damaged cabinet.

“We are a small church so their contribution of labor means a lot to us,” said McLain. “They help us, and we try to help them. What a ministry!”