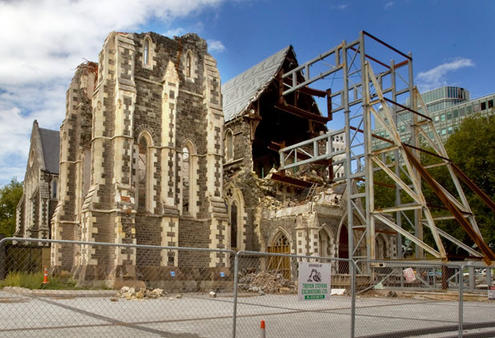 [Taonga News] Quake-crippled ChristChurch Cathedral will be brought down to a “safe level” – between 2 and 3 meters high.

Some walls may be lowered even further, for safety reasons, while none of the walls will be left intact. But the footprint will remain, and no bulldozers or wrecking balls will be used in the demolition.

Earlier, Canterbury Earthquake Recovery Authority (CERA) Minister Gerry Brownlee applauded the decision, which was made last night at a special meeting of the Diocesan Standing Committee and Church Property Trustees.

Matthews said taonga and heritage items – including the stained-glass windows – would be removed over the next few months.

The process of bringing down the 130-year-old cathedral to a safe level is likely to take most of the year.

“This is very different from the plan presented last October, due to the seismic events of 23 December,” she said in a prepared statement to the diocese.

“CERA has insisted that we present a new plan to ensure the building is safe, and we agree with their requirement.

“I am sad to have to relay this decision but I believe it is the way forward.

“There are of course other voices and alternative opinions but I have relayed to you the decision of the Cathedral Project Group, which … has the delegated authority to make recommendations about the future of the cathedral to the Cathedral Chapter, CPT and Standing Committee.

“The decision was made with much prayer and deliberation and has the support of each of the various groups.

“It is also the decision that has the highest support from CERA for safety reasons.

“The demolition and deconstruction will be carried out with care and great respect for a wonderful sacred space that has been damaged beyond repair.

“My prayers and the prayers of many around the world are with you at this time.

“It is now up to all of us to show that we are the living Cathedral of Christchurch; and that we carry within us and live out the Gospel of Jesus Christ wherever we go and wherever we are.

“In the midst of this sad outcome let us not neglect to witness to the hope within us due to God’s love, grace and mercy.”

At a separate CERA media conference this morning, Brownlee told reporters church leaders had made a good decision and he admired their courage.

He said the real challenge now was to work out the shape of the next building or place that defines Christchurch.

‘No bulldozers or wrecking balls’

Speaking to a media conference in the Botanic Gardens this afternoon, Matthews said no bulldozers or wrecking balls would be used in the deconstruction.

She acknowledged “the high level of community interest and sense of ownership as the cathedral was both an iconic building and a place of regular worship by many.

“However, this is now a very dangerous building that needs to be made safe.

“Our priority is also to ensure people working on-site are safe – in fact, if anyone had been in the building on December 23 they would have been put at a great risk of serious injury or worse.”

Matthews said the diocese was facing a hard reality – “the cathedral is the revered ‘Mother Church’ but is not the only church in the diocese to have sustained damage, in some cases irreparable or too costly to repair.”

She said cost had been a factor in the decision. “Currently, the Church Property Trust has estimated a NZ$20-$30 million (US$16.68-$25.02 million) shortfall over the whole Anglican diocese, which does not include the potential cost of any future damage.

“In regard to the cathedral specifically, the sums are staggering. A replica cathedral has been ruled out due to an estimated NZ$100 million (US$83.41 million) shortfall, while a new build incorporating some of the old would incur a shortfall of up to NZ$50 million (US$41.7 million).

“We would not be responsible stewards if we ignored the financial realities – in this respect, we are facing a similar challenge as the Roman Catholic diocese.

“We are now looking to the future and creating a beautiful, inspiring, safe new cathedral but we understand it will take some time for any of these decisions to be made.

“Meanwhile, we are committed to establishing a transitional cathedral in the central city to bring hope to Christchurch and provide a much-needed venue where the community can pray, reflect and gather for worship.”