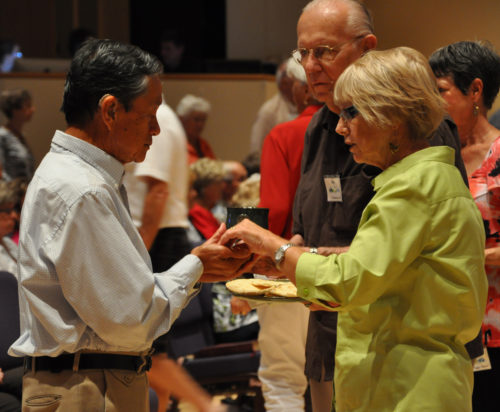 A friend described the Fort Myers church to Jacke McCurdy one Saturday night about two years ago. “I said ‘I have been looking for that church,’” she said. “I went the next day and I never left.”

When Bill Monsees first found Lamb of God, its members were worshiping in rented space in a strip mall next door to a motorcycle shop and across the parking lot from The Sandy Parrot Tiki Bar and Grill.

The Rev. Jacqueline Means, the first regularly ordained woman in the Episcopal Church, worships at Lamb of Gob because “I need to get out of the sense of tradition being all we’re here for.”

They’re all members of a faith community that Senior Pastor Walter Fohs, a Lutheran, says has been breaking new ground and evolving since long before its Lutheran and Episcopal members officially joined together in 2004. Evolution will continue at Lamb of God later this year as Fohs goes on sabbatical and returns in a reduced teaching and preaching role, and another cleric eventually takes on the senior pastor role.

“We’re going to learn how it grows,” said Monsees, who is president of Lamb of God’s governing board which combines the Lutheran council and the Episcopal vestry. He spoke to Episcopal News Service on a recent Sunday morning between the two services during which he and Fohs outlined the plan for the congregation.

Monsees says change and innovation are in Lamb of God’s blood. “I think that it’s part of our charter,” he said with a smile. “We can’t leave well-enough alone.” 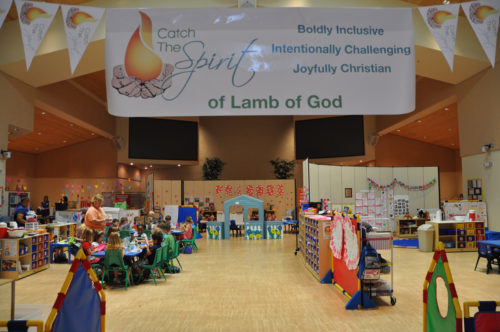 During the week, most of the space in Lamb of God Lutheran Episcopal Church’s main worship space, known as the Vineyard, is occupied by Preschool @ The Lamb and accommodates about 190 children. On Sunday, the space becomes the site of the congregation’s main service. Photo/Mary Frances Schjonberg

Indeed, change is a weekly event at Lamb of God. By weekday the congregation’s building, known as the Vineyard, is a pre-school for 190 children. Then, after they leave on Friday afternoon, their equipment gets wheeled to the sides behind screens and the Vineyard becomes the site of the congregation’s 10 a.m. main worship service, known as the Catch the Spirit service.

Fohs presides at that service in street clothes and preaches from a stool. The liturgy and announcements are projected on two large video screens above the dais that serves as the sanctuary. Lay people stand in a circle behind him during the Eucharistic prayer and they prepare the chalices and paten for communion. Lay people administer both bread and wine.

Fohs vests in more traditional garb for the 7:45 a.m. service in the church’s smaller worship space called the Arbor. That service is based on Rite Two in the Book of Common Prayer.

Monsees said Fohs is the driving force behind much of the change and Lamb of God’s orientation towards service to the community beyond its doors. But, he said, it hasn’t been just Fohs alone.

“We have amazing lay ministry in this church,” he said. “Walter has helped us grow and opened our eyes [to ministry possibilities] but it’s the people who do it.”

Vatland and McCurdy say relationships are the reason they have stayed on at Lamb of God. Vatland, a Lutheran retired from Minnesota, said he was drawn by preaching that put things “into layman’s terms” but it was the sense of fellowship he felt among the members that kept him there.

McCurdy, who attended an Episcopal church as a child, also was drawn to Lamb of God by the preaching. “And then it was the people; they do a lot of good in the community,” she said, adding that sometimes she thought the congregation stretched itself awfully thinly over a wide range of outreach opportunities.

Still, she said, “they do more than you can imagine [and] they help the members that are in need without a big show so you don’t know the members [who are] in need.”

The congregation’s 2012 Ministry Opportunities catalogue lists 12 outreach ministries, 20 ways to minister within the congregation and nine education and hospitality opportunities open to both Lamb of God members and people in the wider community.

Among the most ambitious of the church’s outreach efforts is the annual Thanksgiving “Feeding of the 5,000” during which volunteers from Lamb of God and throughout the surrounding area prepare and deliver turkey dinners for those in need. When the program began in 2005, volunteers delivered 500 meals. This past year, 9,600 people received meals.

In another major ministry to the community, Lamb of God runs a thrift store in a separate location four miles away that sells both clothes and furnishings. In addition to offering customers low-cost and gently used goods, the store contributes about $5,000 to the church’s budget and makes grants of its own to local social-service organizations.

The pre-school that occupies a large part of Lamb of God’s buildings during the week was started by a parishioner who is in the day-care business. It is run independently and pays the church for the use of the space. In addition, Fohs said, the school has given Lamb of God “a reputation for a place that cares about kids.”

The idea for what became Lamb of God Lutheran Episcopal Church grew out of a friendship that formed between Fohs, who began his ministry with the Lutheran Lamb of God congregation in the mid-1990s, and the Very Rev. John Adler, who was then serving as interim vicar at nearby St. Joseph’s Episcopal Church.

St. John’s and Lamb of God Lutheran were at the time in locations that Fohs recalled were “abysmal.” Lamb of God worshipped in a former retail store it owned next to a Burger King in a bend of the northbound side of U.S. 41, also known as Tamiami Trail, a busy commercial road. But, the church could only be seen from one side of the road. Meanwhile, St. Joseph’s was at the end of a dead-end road off the southbound side of Tamiami. It was just a block from the water but had no view of the water.

Fohs convinced the Lutheran congregation to sell the property and build the first of its two buildings on what was then the growing southern end of Lee County. Lamb of God moved to the rented space in which Monsees first found the congregation and the Lutherans dedicated “The Arbor” in the early fall of 2000.

Meanwhile, St. Joseph’s had been struggling because of conflicts with two previous priests and Fohs said Adler helped the Episcopalians consider their options. They included disbanding and dispersing to one or more other local Episcopal churches or “close your door and because of the agreement, walk down the street and become a part of Lamb of God.”

“They were not too awfully excited about that right away because they were a pretty tight-knit group,” Fohs said.

But on Dec. 31, the last Sunday of 2000, the St. Joseph’s congregation had its final Eucharist at their church and then drove over to Lamb of God, led by the procession cross sticking up through the sunroof of one member’s car.

As they drove up Cypress View Drive to the church, “we made a double line with all of our folks holding flowers and we welcomed them into this building” where the two congregations celebrated Eucharist again, Fohs recalled.

Early the next year the Episcopal Church and Evangelical Lutheran Church in America entered into a full-communion relationship (known as Called to Common Mission) that opened a door to new possibilities for shared ministry among congregations in each denomination. However, St. Joseph’s and Lamb of God were not formally joined at that point.

“We kiddingly said to each other that we’re living in sin,” Fohs joked. 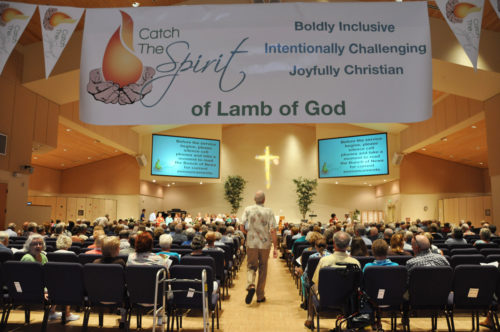 The Rev. Walter Fohs, Lamb of God Lutheran Episcopal Church’s pastor, walks up the aisle of the Vineyard to begin the congregation’s main service in the space transformed from the weekday preschool. Photo/Mary Frances Schjonberg

Eventually in 2004, the two congregations made it official, becoming a so-called “federated congregation” in which both congregations became members of a new non-profit organization that is subject to the governing provisions of both denominations. It reports to both the ELCA’s Florida-Bahamas Synod and the Episcopal Diocese of Southwest Florida.

“I have two bishops,” Fohs said.

A copy of the agreement can be found here at the Lamb of God listing under the Called to Common Mission link on the left side of the page.

At the time of the agreement, three-quarters of the congregation was Lutheran and a quarter Episcopalian, according to the agreement. However, since then the agreement calls for “no distinction in congregational membership based on previous denominational affiliation.”

Monsees, a Lutheran when he joined Lamb of God, said denominational identity is indeed not a question, and Fohs agreed. “We have a non-denominational church here,” he said. “Now, I don’t think that’s a bad thing.”

Fohs says “it’s been nothing but growth” in the years since the two congregations merged. These days between 300 and 400 people attend Sunday services in season and 130-160 during the summer months when the area’s “snowbirds” have gone back to their northern homes.

“They’re growing, they’re vital and they have children,” said Means, who splits her time between the Indianapolis area and a home in nearby Estero, Florida. “They’re doing something right.”

Change came again to Lamb of God in 2010 when the Rev. Becky Robbins-Penniman, an Episcopal priest who had worked with the Lutheran Fohs since 2002 during Lamb of God’s formative years, left to become rector of Church of the Good Shepherd in Dunedin, Florida. “We created our own volcano,” Fohs said of their partnership. “We pulled it off both for ourselves and for the community.”

When Robbins-Penniman left, Fohs and Monsees said, Lamb of God could not afford to replace her. This was due in part to the way the economic recession hit their part of Florida.

Called to Common Mission gave the two congregations the “impetus, opportunity and permission” to consider how they might combine forces for ministry, Fohs said. Without what he called the “nationally recognized permission,” Fohs said “there would not have been the motivation” to do so.

The Rev. Jon A. Perez, who leads Epiphany Lutheran & Episcopal Church in Marina, California, and is a member of the Lutheran Episcopal Coordinating Committee told ENS that Lamb of God is a “best-case scenario” and “an example of what can be achieved” under the full-communion agreement. By contrast, Perez said his congregation was closer to the worst-case scenario, having developed after a nearby Episcopal parish was dying and down to “the last five survivors” who “did not want to be a joint ministry.”

Even with the full-communion agreement, no more than 50 Episcopal and Lutheran congregations, plus some joint campus ministries, have united under its terms, according to Perez, who maintains a list of those congregations here.

“We’re a very small minority over here in the corner,” Fohs noted.

Perez cautioned that, too often, it is only congregations facing what he called “failure” that are considered ripe for such combinations. Instead, he suggested, congregations focus on their assets and what could be achieved by coming together. “People want to see the church working on healing and being one,” he said.