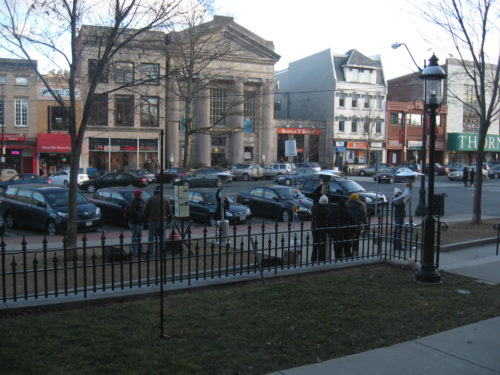 Volunteers set up for "Cathedral in the Night" homeless ministry.

[Episcopal News Service] The loss of her job in the medical records field more than two years ago cost Carol Hopkins her home and forced her to move. And although Hopkins, 60, still makes searching for a new job a daily task, she fears her age is limiting her ability to find employment again.

“I try to stay hopeful and be positive,” she said.

Hopkins is one of dozens of homeless people in Northampton, Massachusetts, and its surrounding communities who have found solace and a hot meal at an ecumenical outdoor ministry called Cathedral in the Night.

The ministry, which started in January 2011, is a collaboration of three ministers: Chris Carlisle, an Episcopal chaplain at Smith College and the University of Massachusetts; Stephanie Smith, pastor of Our Savior’s Lutheran Church in South Hadley, and Eric Fistler, pastor of West Suffield Congregational Church in Connecticut and former minister of education for Edwards Church in Northampton.

The three wanted to create a street ministry in Northampton that would provide fellowship for the area’s homeless population and engage college students. 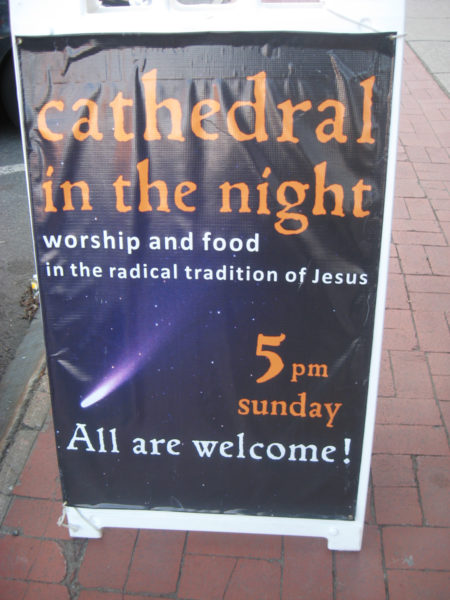 Street sign invites all to "Cathedral in the Night" worship and dinner.

Northampton, a town of about 28,550, is home to five colleges and universities. The town and the surrounding Pioneer Valley also is home to an estimated 670 homeless people, according to the statistics compiled by Hampden, Franklin and Hampshire counties in 2006, before the recession hit.

“There is a certain magnetism between the homeless and students – a natural confluence in demographics,” said Carlisle, who has spent 30 years working with college-age students.

Carlisle secured a two-year, $60,000 grant from the Episcopal Church’s Office for Young Adult and Campus Ministries in June 2010 to create the unique street ministry, which is designed to mirror early Christian traditions.

“We wanted to create an outdoor community that is inclusive. This is not outreach; it is the church. Jesus was always outside of the synagogue with the people, and we wanted to follow that,” said Carlisle, who currently is on a sabbatical in southern France.

The worship service is held each Sunday in front of First Churches, which is allowing the group to use the space. The location is on Northampton’s Main Street, surrounded by boutiques and the R. Michelson Galleries.

One cold, windy Sunday evening in mid-February, at least 50 people gathered, including the Rev. Tim Oslovich, who brought at least a dozen of his congregants from Trinity Lutheran Church in Vernon, Connecticut. Several churches from throughout Massachusetts and Connecticut have donated their time and talents for the ministry.

The space was outfitted with four propane heaters and six portable lamps decorated with paper cranes. The lamps were created and donated by an architecture class at UMass.

Coats, hats, mittens and hand warmers were available for participants to take, as the temperature hovered around 25 degrees.

A 30-minute worship service was followed by a meal. All of the food was donated by local businesses and places of worship.

“We try to not make it feel too much like a soup kitchen. Everyone helps themselves, and we all eat together outside,” Smith said.

And for many of the homeless participants, Cathedral in the Night is a welcome reprieve and an opportunity to learn more about others in similar situations.

“I don’t feel alone here. I also feel an obligation to help, regardless of my situation,” said Hopkins.

Part of the Episcopal Church grant has gone to an internship program for college students who are interested in exploring alternative forms of worship.

Ali Brauner, 19, who is studying religion at Smith, is working to create small groups on her campus to discuss social justice and religion.

“There is an obvious disparity in the social classes here,” she said.

In addition to drawing more students to help and participate with Cathedral in the Night, Carlisle said he hopes to create more street ministries in Greenfield and Holyoke.

But the one-time Episcopal Church grant runs out this year, and the ministry’s continuation will depend on donations.

“Many homeless individuals, those struggling with addictions or certain mental illnesses, and college students, too, are sometimes hesitant to take part in parish life. They don’t see a place for themselves in church communities, or they feel out of place,” said Farrand-Bernardin, who is a recent seminary graduate and a Smith College community religious advisor. “Cathedral creates a very important bridge for those folks.”