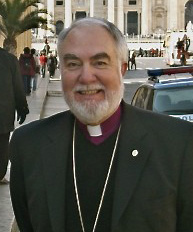 [Episcopal News Service] Our presiding bishop suggested this year that we might use the United Nations’ Millennium Development Goals as a lens through which to view our observance of this season. When the Episcopal Church adopted these goals at our 2006 General Convention, there was some criticism that these were “secular” goals and that we were somehow taking our eyes off the real mission of the church by using these as guidelines or milestones on our spiritual journey as Episcopalians.

Those sound suspiciously close to Gospel values, if you ask me, particularly when you take into consideration the fact that Jesus’ primary message in the Gospels was not about how individuals could go to heaven, but about establishing the Kingdom of God here on earth! In Mark’s brief account of Jesus’ temptations in the wilderness which we read today on this First Sunday of Lent, he did not spend a lot of time on the specifics of those temptations, but concludes the story by summarizing the essence of Jesus’ message (which was essentially the same as John the Baptist before him and the Hebrew prophets down through the ages):

“Jesus came to Galilee, proclaiming the good news of God and saying, ‘The time is fulfilled, and the kingdom of God has come near, repent, and believe in that good news!'” (Mark1:15). The good news, for Jesus, was that God was king and Caesar was not! The good news for Jesus was that it was not necessary to wait around for some distant future when God’s reign and God’s sovereignty would be established. That time had come! And it was time to turn around, acknowledge that fact, and begin to live as though it was true! The time is fulfilled…the kingdom of God has come near…repent…and believe that good news!

And how are we to live, now that the Kingdom has dawned in the life, death, and resurrection of Jesus? Well, we are to work to eradicate poverty and hunger – because Jesus once saw to it that 5,000 people were fed because (he said), “I have compassion for the crowd.” (Mark 8:2)

We are to commit to make universal primary education available to the children of the world – because Jesus once said “Let the little children come to me; do not stop them; for it is to such as these that the kingdom of God (really) belongs.” (Mark 10:14)

We are to work to reduce child mortality — because Jesus was once confronted with a young boy with a terrible, debilitating illness. “How long has this been happening to him,” he asked the father. “From childhood,” the man answered, “It has often cast him into the fire and water, to destroy him; but if you are able to do anything, have pity on us and help us.” Mark says “the boy was like a corpse, so that most of them said, ‘He is dead’ but Jesus took him by the hand and lifted him up, and he was able to stand,” (Mark 9: 21 passim)

We are to improve maternal health – because Jesus once healed a woman who had been hemorrhaging for twelve years (perhaps since the day of her first-born’s delivery). “If I but touch his clothes,” she said, I will be made well. Immediately her hemorrhage stopped; and she felt in her body that she was healed of her disease.” (Mark 5:28-29)

We are to commit to combating HIV/AIDS, malaria, and other diseases because if there is one thing that is absolutely clear from the Gospel accounts of Jesus’ life, it is that he was a healer! He never turned away anyone who sought healing. And he never asked how they got sick!

We are to ensure environmental sustainability because Jesus came from farming country in northern Palestine. He loved the land, using the cycles of planting and harvesting in so many of his parables. And he came to love the sea – making sure his fishermen friends always hauled in a great catch (even after they had left their nets…to follow him). (Mark1:16)

And, finally, we are to support efforts to partner with our sister and brother Christians, and all people of good will around the world, because it was said, of Jesus, that he made no distinctions among people and once, when a stranger was found casting out demons in his name, Jesus said, “Do not stop him; for no one who does a deed of power in my name will be able soon afterward to speak evil of me. Whoever is not against us is for us.” (Mark 9:39-40)

Yes, I think the Millennium Development Goals, perhaps first articulated by the United Nations, meet the scriptural test as being faithful to the Gospel message. And the fact that some people find that so hard to believe is more a testimony of our failure to preach the message Jesus sent us out to preach than it does to their ignorance or hardness of heart. For too often, dear friends, our message has been too timid and our God too small for people even to “believe this good news” let alone to “repent.”

During these forty days of penitence and fasting, I challenge you to do a bit more than giving up chocolate. I know you’re doing some of these things at your churches and in your individual lives, but I challenge you to continue to dream big dreams and to take on at least one of these goals this Lent – either locally or somewhere around the world.

Because … the time is fulfilled … the kingdom of God has come near … Repent, and believe in this good news!

— The Rt. Rev. Christopher Epting is assistant bishop of the Diocese of Chicago.