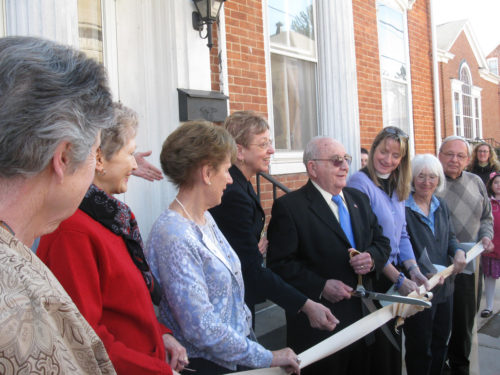 The Rev. Kate Kelderman, rector of Prince of Peace Episcopal Church, and members of the Gettysburg Community Soup Kitchen staff and board members help Gettysburg Mayor William E. Troxell cut the ceremonial ribbon during an open house for the new location. The kitchen has been moved from its longtime home in the Prince of Peace church's basement to a building next door.

[Episcopal News Service] The Memorial Church of the Prince of Peace, a historic Episcopal parish located in Gettysburg in south central Pennsylvania, marked 20 years of close partnership with the Gettysburg Community Soup Kitchen with an open house event and special liturgy on Feb. 26.

Prince of Peace’s Rector, the Rev. Kate Kelderman, was joined by other area clergy in the liturgy and blessing, which was adapted from the prayers for the blessing of a house from the Book of Occasional Services. A ribbon cutting with the Mayor of Gettysburg officially kicked off the event.

“Prince of Peace is honored to have been the founder of the Gettysburg Community Soup Kitchen, and we’re constantly blessed by our long association with it,” said Kelderman.

Established in 1991 as a ministry of Prince of Peace, the soup kitchen has been since 1994 a community-based organization supported by more than 25 area churches, more than 15 local groups, businesses and foundations, and countless individual donors, volunteers and sponsors.

Housed since its founding in facilities at Prince of Peace on High Street in Gettysburg, the soup kitchen recently moved next door to “Peace House,” a former Roman Catholic rectory also owned by Prince of Peace. Extensive renovations to Peace House to accommodate the expanded soup kitchen facility were undertaken prior to the move.

In its 20-year history, the soup kitchen has served some 180,000 meals to its guests. More than 10,000 meals were served in 2011 alone. The soup kitchen now has the ability to also serve meals on Sundays. The new schedule will begin after Easter.

“These are exciting times for the organization,” said Mary Daniel, chair of the soup kitchen’s board. “Whenever possible, the soup kitchen, assisted by its many partners, provides other programs to improve the physical spiritual, and emotional well being of our guests.”

According to Daniel, the soup kitchen serves a mid-day meal six days a week, from 11:30 a.m. to 12:30 p.m. Monday through Saturday. Any person who comes in need of a meal is served hot, nutritious food, with respect and kindness. Guests are never required to complete paperwork, or to provide proof of identification or income. Guests, who number between 25 and 75 people per day, range in age from infants to seniors of 80 years of age and more.

During the summer, the Soup Kitchen also provides hot lunches and supplies for Prince of Peace’s “Meals and More,” an enrichment and activity program for community children. A new outreach program for needy veterans is also under way.

—Art House, a parishioner at Prince of Peace since 2003, is a retired U.S. Army officer. He serves as the parish publicist.